Source: Trois Couleurs
He spent only one brief week on the set, to lend his threatening features to the William S. Burroughs character, known in the book as Old Bull Lee. And yet in such a short time, his statuesque frame, impressive acting experience, outstanding erudition, and awesome ability to get into character may have made Viggo Mortensen the most awe-inspiring of the veterans participating in the adventure, in the eyes of Walter Salles' youthful crew. As the link between Cormac McCarthy's Road (he played the hero in John Hillcoat's film version of the novel) and Jack Kerouac's, he freely associates here between Freud's sofa and Burroughs' madness. Interview with a force of nature. 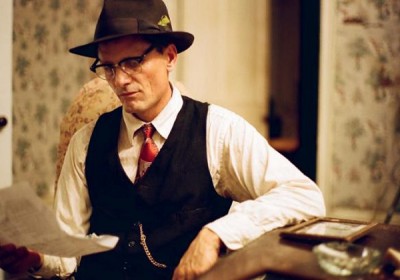 Image Gregory Smith.
© MK2 Productions.
Were you familiar with the Beat generation before accepting the role of Old Bull Lee?

Long before I even considered becoming an actor, I had read On the Road and had become familiar with the writings and legendary personas of Jack Kerouac, William Burroughs, Allen Ginsberg, Neal Cassady and other men and women who had in some way informed the sprawling, frenzied narrative of that novel. Like others who grew up in the 1960s and 1970s, I took an interest in not only Kerouac, but also in what supposedly inspired them - apart from literature - during those post-war decades: the jazz figures (Charlie Parker, Dizzy Gillespie, Miles Davis, Thelonious Monk?), painting (Abstract Expressionism), and movies (Italian Neorealism, Nouvelle Vague, etc.) I was excited by the energy of Kerouac's writing. I was also mesmerised by some of Ginsberg's poetry, especially by his famous long poem Howl. Later on, however, it was Burroughs' work that I gradually came to see as the most ground-breaking and lasting literary contribution from the Beat generation. Burroughs seemed to consistently find ways to write with beauty, humour, and a graceful inventiveness about even the most squalid and/or bizarre subjects and characters. Although his characters frequently use the argot of a specific era, he himself is not limited by it in his own descriptions. In re-reading Burroughs while preparing to play Bull Lee, and especially in listening to recordings of him reading his stories, what most struck me was that originality of his prose, his very particular sense of humour, the lack of artifice and the perverse elegance characteristic of his writing. One of the things that clearly separates his work from Kerouac's and Ginsberg's is its general lack of mysticism; to me it feels much more cold-blooded, surgical, clean.

Do you remember how you felt when first reading On the Road?

Reading On the Road made me want to travel, to see for myself and be part of the answer to Kerouac's question in that book: "Whither goest thou, America, in thy shiny car in the night?" In terms of its cultural importance, I believe that for North American and European artists and audiences of my generation Kerouac's novel provided a kind of synthesis, a loose codification of many creative, counter-cultural impulses. On the Road has influenced a long list of movements in art and politics that is too varied to enumerate here. I believe Jack Kerouac encouraged us to ask "Why not do it?"

What is Old Bull Lee's most important side to your eyes: the father, the writer, the teacher, the junkie, the lover?

All of those aspects of his character were important, but I believe the one we will see most clearly in the movie, and the one that to some degree includes all the rest, is that of teacher. His literary knowledge, as well as his irreverent and playful outlook on life, are important reference points for his younger fellow adventurers in On the Road.

The New Orleans stop is a short but crucial step in Dean and Sal's journey through America. Your character warns Sal about Dean's childish amorality and irresponsibility. Yet, Old Bull Lee is far from being moral and responsible. How did you deal with this contradiction?

In my opinion, there is a method to the Burroughs "madness". His drug-taking and other libertine interests were often based on serious study and meditation, as were, to a lesser degree, those of Kerouac. My sense about the real Kerouac is that his increasing alcohol abuse eventually diminished his creative powers and production during the 1960s, whereas Burroughs' chronic opium abuse seemed to have facilitated his literary output and experimentations.

What was the atmosphere during the shooting?

The atmosphere on the set was very relaxed, free-thinking, very conducive to exploration and risk-taking - just as Old Bull Lee would probably have liked it to be! Although Walter Salles, unlike David Cronenberg, likes to rehearse a lot and improvise to some degree with the script, I found that their ways of handling actors and organizing scenes were similarly well-informed and stress-free. Walter is very intelligent and kind, and seems secure in the knowledge he has gained over the years with respect to the technical skills required to make a good movie. He, like David and other extremely gifted and well-mannered directors, inspire confidence and respect.

David Cronenberg, who directed you in three movies, had adapted Naked Lunch in 1991. Did you speak about Burroughs together?

We did speak a little about Burroughs, which was helpful. I had seen David's movie as well as interviews he and Burroughs had done in connection with its release and promotion back in 1991, and I took another look at some of that as I went about preparing Bull Lee.

Coming out of playing Freud, how was it to play another older, "wise" figure?

My initial reaction was similar to the one I'd had when David had offered me the role of Freud - that physically and in other ways I was perhaps not the ideal actor for the job. However, I bear more of a physical resemblance to Burroughs than I do to Freud, so less of a physical change was required. In terms of the type of person he was, and the role he played in the lives of his contemporaries, I realised that the Burroughs-based Bull Lee had much in common with Freud. Like Freud, Bull was, for example, a slightly older and more formal mentor figure. In On the Road he shares with Sal, Dean and others his knowledge about writing, writers, drug use, weapons and other matters - just as Freud shares the fruits of his academic investigations and life experience with his colleagues.