Heart of a Champion

I couldn't sleep after seeing the game against Unión de Santa Fe on the hotel TV in Río Gallegos. Like all Cuervos, I spent some very anxious minutes. I'm happy with the result, of course, but the victory didn't come easy. Before saying more about San Lorenzo, I want to congratulate the Tatengue team, their coach and their fans for the example of courage and dignity they provided. Facundo Sava showed a huge amount of class as he expressed his feelings after the defeat, and his players also took it admirably. We aren't used to seeing coaches and teams behave as nobly under such adverse circumstances. I hope they return soon to the First Division.

© Club Atlético Unión de Santa Fe.
Franco Jara is to be congratulated for his goal, after having failed at critical moments in so many games, but I don't like the way he celebrated it at all. His defiant gesture was pure selfishness. Being lucky enough to score the Ciclón goal, thanks to his teammates, especially Romagnoli and Verón, handing it to him on a platter, is not an excuse for messing with the Cuervo supporters. It would have been better to celebrate the goal with them instead of against them. Juan Antonio Pizzi, without being too cruel, said it very clearly and fairly in his statements after the match: "In soccer, I learned one single thing: the only thing that's indisputable is the people." Jarita hasn't been playing as well lately as I suppose he could and wants to. He didn't start well in this match either. I don't say this just because he tried to make himself the big guy with that little backheel kick instead of kicking that great pass from Verón straight and well. A little later when entering to replace Kalinski in the second half, he ended up on the ground a couple of times and didn't get up quickly at all, like his teammates did. There was no urgency or good collective effort in the way he played. Besides, when scoring the goal that leaves the rival without hope, especially knowing that he is sentencing them to relegation, you have to show some common sense and compassion. I can imagine the frustration the player must feel when he has a run of bad luck, with a good part of the supporters booing him, and when he doesn´t play well in an important match. It must be difficult, but you have to bear it for the good of the team, and to grow as a player. His behaviour was completely at odds with that of the rest of his teammates, and with the moment they were experiencing, both his team as well as the opposing team. It seemed to me that it was a bit suicidal, as if subconsciously he had come to accept they were going to sack him or wanted the club to sack him. If he doesn´t apologise to his team and the supporters, it might happen. I wish him the best, and I hope he knows how to reverse his situation in order to keep getting better and for CASLA to benefit from his talent. 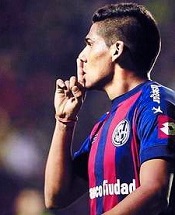 © Unknown.
Buffarini didn't have his best night, and it was noticeable that he was dissatisfied with being substituted, but he didn't hassle anyone about it. I'm sure that he will be looking to continue progressing. He's given a lot to the team and is going to be a key piece for San Lorenzo in the four matches that remain to be played in this tournament. Mercier made a crucial contribution, especially in the first half of the match, as was the case with Verón, Correa, Piatti and so many others. The best thing about San Lorenzo and its coach was the teamwork. They showed endurance and calmness, coming back in the second period with intelligence and the hearts of champions. On one hand I feel very sorry that a club as brave as Unión had to be relegated, and on the other hand, I have to recognize, as a Cuervo supporter, that this triumph was super important at this point in the tournament. The good result lets us continue to aspire to everything.

Mercier dominating.
© Unknown.
The Saturday before the match, I had the good luck of being able to drop by the sports complex to see a little of the training of the junior teams and those of the First Division. It was a very beautiful day and the players impressed me with their technical skill and with their collective good vibe. Pampa Biaggio, the great figure of the San Lorenzo championship of 1995, under the direction of Bambino Veira, continues doing a tremendous job with the youngsters of CASLA's 8th division.

Pampa Biaggio, 1995.
© Unknown.
Two players from that team, Germán Berterame (forward) and Gonzalo Villarreal (defender), have recently been asked to train with the National Team Sub 15. We have a great pool of talent. El Pampa was kind enough to let me take a photograph with the youngsters: 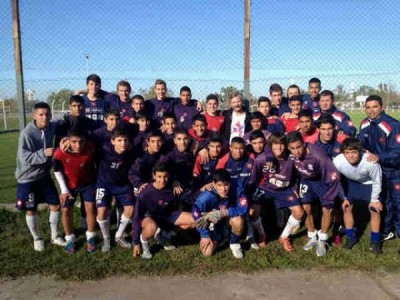 Viggo attends the San Lorenzo training ground - ….
© CASLA.
I could see up close how Pizzi was working with his guys. I was excited to see them preparing themselves for the match with Unión in a way that was relaxed and very connected at the same time. To see Pipi recovered and in good form after the long months of physical rehabilitation made me very happy, too. Romagnoli has returned as he clearly showed in the Monday match, and he's there to contribute his good game, his experience to Ciclon's winning streak.

I spoke by phone with Pablo Migliore a few days ago and admire the humility with which he has accepted the decision of the CASLA coaching staff to dispense with his services. He says that he understands perfectly the delicate situation in which his recent legal problems and incarceration have put the club. Although I know that Loco would have liked to remain with San Lorenzo to continue fighting for the championship (I would have preferred that, too), I congratulate him on signing a contract with Dinamo Zagreb, the reigning champions of Croatia. I hope to be lucky enough to go see him play in the Champions League tournament during the next European soccer season.

With his new shirt.
© Dynamo Zagreb.
We have one last day of work here in the Province of Santa Cruz. The landscapes in which we've been shooting are beautiful. They remind me of certain parts of the south island of New Zealand and Iceland a little bit, too. This is a photo of Laguna Azul, where we filmed Monday:

© Viggo Mortensen.
The few people I've been able to meet in Río Gallegos have been very nice and generous with us. Although we have only been here a couple of days, we have had a very good time. I'm going to return as soon as I can to get to know this province better.

A few days of work remain to finish filming the movie. I think that Lisandro Alonso is going to surprise [people] once more with his particular vision of the world and of human behavior. And Ghita Nørby, the great Danish actress that came to work with us on these final scenes, is educating us with her art and way of being. She gave me a new edition of the book that Johannes Sløk wrote about the philosopher, Søren Kierkegaard. The book's called Kierkegaards Univers [Kierkegaard's Universe]. In Spanish, the title would be El universo de Kierkegaard. I know that book's been translated into English, but I don't know about Spanish.

© Lindhardt og Ringhof.
I mention this book because, as our screenwriters Fabián Casas and Lisandro Alonso know, our film has a whole lot to do with the particular vision of Kierkegaard. The following quotes of his could describe our cinematic story up to a certain point (and definitely, the personal dilemma and journey through the desert of the character that I play, Gunnar Dinesen.)

"To be human is a synthesis of the temporal and the eternal, the finite and the infinite."

"Anxiety is the dizziness of freedom."

"Life is not a problem that has to be solved, but rather a reality that must be experienced."

I think that these phrases describe very well the continuity of the deeply rooted and at the same time inexplicable feeling of the San Lorenzo supporter. We carry on with a love ever more deep, learning and holding on in good times and in bad, without ever giving in. I guess that one of CASLA´s most philosophical Kierkegaardian sentences is the one from Bambino Veira:

"We right the ship and depart, baby!"

© Unknown.
P.S. I just read, right before posting this instalment of the column, that Jara asked for forgiveness. He said that "...it was a heated moment, after such a long time without scoring a goal." He righted the ship. Heart of a champion.
Top of this page
Last edited: 18 April 2014 15:59:24
© Sobrevueloscuervos.com.