Viggo Mortensen - The Lord of the Rings: Return of the King 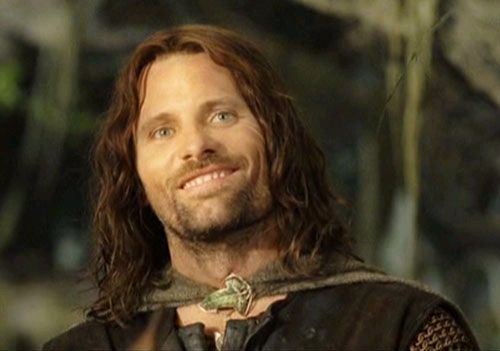 © New Line Productions Inc.
If Stuart Townsend hadn't relinquished the role of Aragorn in Peter Jackson's Lord Of The Rings trilogy, Viggo Mortensen might be best known now for his performances in the likes of G.I. Jane, Daylight, and A Perfect Murder. Luckily for him his turn as oh-so-serious Aragorn have made him an unlikely star in his mid-40s. He'll get a chance to test the brightness of that star wattage when horse racing drama Hidalgo opens here in the spring.

What's the best thing about having been a part of The Lord Of The Rings trilogy?

What for you was the biggest challenge in playing Aragorn?

The Return Of The King plays out the conclusion of Frodo and Aragorn's journey, and it's not all happy. What for you is the message of the third film?

Simply that life is sorrowful. You can't change that. But you can change your attitude towards it. I think that's what this film is about.

Ian McKellen says these three films are classics already. Do you share that view?

Absolutely. These are films which people will be watching ten, 20, 30 years from now. I think they are going to have that kind of legacy, and I think these movies will live on for a long time, not just in those of us who were part of them but for all the fans too.

Do you have a favourite moment from the trilogy?

You know, from the very first day I went to the set in New Zealand every day has been a special day. I can't pick one scene out or one day, or even a character. These movies were about collaboration and we're all part of a big family and we all feel the same way about these films. At the heart of the story is the idea that we have more in common with others than we have differences. There is more that unites us than divides us. And I think we discovered that for ourselves as actors whilst working on the films.
Top of this page
Last edited: 28 May 2013 16:21:29