Viggo Mortensen on Everybody Has a Plan, Beekeeping and The Hobbit 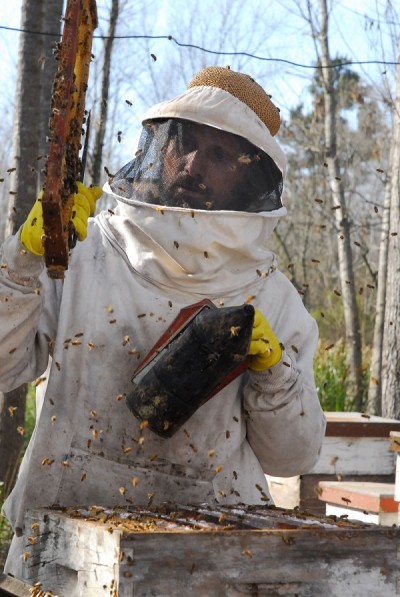 Image John Harris.
© 20th Century Fox/Haddock Films.
Of all the actors whose lives were changed by the Lord of the Rings movies, few have had as interesting a post-Rings career as Viggo Mortensen. Since playing Aragorn, he's gone on to star in such quiet but powerful movies as Good, The Road, and David Cronenberg's A Dangerous Method. Now he's playing identical twins in Argentine director Ana Piterbarg's Everybody Has a Plan (in limited release Friday), about a man who murders his identical twin, assumes that twin's identity, then finds himself in the middle of a violent feud. It's a moody, tense story, and Mortensen gives a transfixing performance - entirely in Spanish. (He grew up in Argentina and is fluent in the language.) Vulture spoke to the actor about his new film, all the preparation that goes into his work, and his nostalgia for Middle-earth.

First things first: As someone who grew up in Argentina, what do you think of the new Argentine pope?
The most interesting thing about the new pope, as far as I'm concerned, is that he follows the same soccer team I follow, San Lorenzo. And he's been following them since he was a little kid, like me. If there has to be a pope, and if he's going to be Argentine, then he may as well be a fan of the same team I am.

So much of Everybody Has a Plan is your character just thinking. That's something I notice over and over with you: You're able to convey actual thought onscreen.
I think part of it is just how you prepare roles. When I prepare, I ask a simple question: "What happened between the character's birth and page one of the script?" And right there you can find most of the answers, even before you start shooting. I find that process really enjoyable. Just like a kid does when he pretends: it doesn't matter how little they look like a princess or an Indian or a Viking or a sports star, whatever they're pretending to be, they really believe it. They enjoy playing, basically. So the goal is always - in a very serious, methodical, detailed, much more layered way, I suppose, intellectually, than kids use for make-believe - to get to the same place where it's just fun and play. But you have to do your homework first, and that's what I try to do.

One of your characters in the film is a beekeeper. Did you learn to do your own beekeeping for the film?
Yeah, I did. Of course, the first time you try, you're worried about being stung. It can happen even if you're wearing those masks. But the thing I didn't realize was how noisy it is, how loud a bee sounds when it's hovering right near you. So imagine thousands of them all buzzing at the same time. It's deafening. It's kind of shocking at first, but then it's strangely soothing. It's so overwhelming that it puts you into this place where you're very focused, unless you freak out and run away. But I had a good teacher. We even made our own honey. I still have some left.

Did you talk to David Cronenberg during preparation, since he did the ultimate movie about identical twins, Dead Ringers?
I did. He told me a little bit about what he remembered from Jeremy Irons's approach, which was kind of in line with what I was already doing, in terms of preparation. I tried very hard to differentiate between the two characters I was playing: in the scenes where both brothers appear at the same time, I really tried to make them two distinct personalities. And I do think that Dead Ringers was really two great performances - Jeremy Irons's best work he's ever done in movies, really amazing. And I don't think it should be any kind of surprise that when Jeremy won an Oscar for playing Claus von Bulow in Reversal of Fortune, one of the first things he did when he went up onstage was to thank David Cronenberg for the work he'd done in Dead Ringers. A lot of actors and actresses have done their best work with David - whether it's Jeremy or William Hurt or Ed Harris or Christopher Walken. He knows how to communicate with actors. He makes actors comfortable, and he gets the most out of them. He's the kind of person that you want to do an especially good job for.

I first interviewed you years ago, a few months before the first Lord of the Rings came out. You said you'd be more worried about playing a real person like Henry Kissinger than Aragorn, because people know what Kissinger was really like. Since then you've played Sigmund Freud, in Cronenberg's A Dangerous Method. So were you concerned at first to take the part?
To be honest with you, when David first suggested it to me, I wasn't available. He went and cast Christoph Waltz. Then Christoph won an Oscar for Quentin Tarantino's movie Inglourious Basterds and shortly thereafter left the production, I think amicably, in order to play in Water for Elephants. So David came back to me. He and I knew each other fairly well by then, and I didn't necessarily think I was right for the part. I said, "Are you sure?" And he goes, "Absolutely."

I was just worried about getting it right. When I do a fictional character, I ask myself questions about his life. With Freud, I didn't have to make it all up. My approach was similar to my approach to Old Bull Lee [a.k.a. William S. Burroughs] when I did On the Road for Walter Salles. I just started listening, looking at all the material I could, and tried to do my take on it and do justice to it. There is a lot of photographic material on Sigmund Freud, but there's very little video of him. I did find audio of him, which I think is available from the BBC. It was an interview, done in the last year of his life, and his voice was very weak; he'd had a lot of operations for the cancer he was suffering from. But I just read everything, reread everything by him. I paid particular attention to any documentation by his contemporaries: descriptions of him, how he walked, the cigars that he smoked, how did he smoke them, what food did he like, what kind of voice did he have. I learned that he was a charming extemporaneous speaker. Most of his academic contemporaries would pepper their speeches with a lot of Latin and Greek words, but he peppered them with humorous asides and spoke very good, understandable German. It helped a lot to learn that.

You do a lot of preparation for your parts. For Lord of the Rings, even though you were a last-minute replacement for Stuart Townsend, I recall you started reading all the Icelandic sagas immediately.
I knew a lot of those from my childhood, and I had them at home in my own library. The Völsunga Saga, for example, was one that I had at home. But I didn't realize I needed to bring it with me!

Did you get a chance to see The Hobbit?
Yeah, I did. I went on opening day to see it. I was actually in Argentina, and I went with a bunch of kids and their parents. It was kind of a party atmosphere, it was fun, it was in 3-D, and they had popcorn. I enjoyed it. In particular it was nice to see some of the landscapes I remembered. It was a nice trip down memory lane, where we'd shot near some of the places where I'd gone camping or fishing.