Viggo Mortensen on Everybody Has A Plan, Argentine Popes and His Beloved San Lorenzo 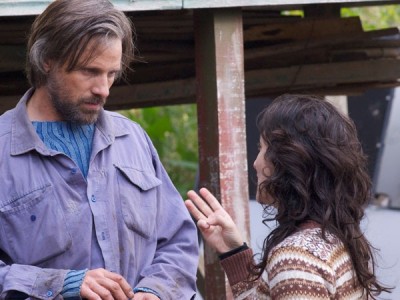 © Haddock Films.
Most people, when they hear the name Viggo Mortensen, instantly think Lord of the Rings. To the vast majority of popcorn-munching moviegoers, Viggo might as well be Danish for "Aragorn." His performance as J.R.R. Tolkien's legendary (and legendarily rugged) fantasy king was so iconic, Viggo could easily have carved himself a comfortable throne playing all the mythic monarchs that big-budget franchises rely on. Instead Viggo went on to portray a cigarette-swallowing Russian mobster, a helplessly intellectual Sigmund Freud and, most recently, Argentine twins in his latest film Everybody Has A Plan. In fact, Everybody Has A Plan, (which opens this Friday in New York and L.A.) is the perfect example of what drives Viggo Mortensen. While others salivate over a role in whichever potential tent-pole is good to go, Viggo's taking a chance on a Spanish subtitled film from a first time director he met at a soccer club. (Though obviously, given Lord of the Rings Viggo's not above those mega-blockbusters.) Because to someone like Viggo, starring in Everybody Has a Plan isn't a chance; it's a necessity.

I'm not just blowing smoke: I recently got a chance to work with Viggo on the upcoming thriller The Two Faces of January and saw him in action. So, granted I could be a little biased, but watching him work I began to understand why Viggo would star in a movie like Everybody Has A Plan without a second thought. He's the kind of star directors dream about: professional, playful and eager to make a movie that doesn't wrap itself up in a neat pre-digested bow. Likewise, Ana Piterbarg's Everybody Has A Plan is the kind of enigmatic film that gets under your skin and sucks you into its exotic, alienating world of Argentina's Tigre Delta. In other words; a perfect match. So, I jumped at the chance to catch up with Viggo and talk about betting on an unsolicited script, what he thinks of the new Argentine pope (having grown up in Buenos Aires), and of course, his favorite topic: soccer team San Lorenzo.

I really enjoyed the movie. It had an enigmatic South American literary feel, like a Borges story or a Bolaño novel. What made you want to do this script? I hear it came to you in an odd way.

Well, it was unsolicited. I ran into Ana Piterbarg just by chance [in Argentina.] I was actually at the headquarters of the club that I'm a fan of, San Lorenzo. Anyway, I was down there on a visit, a few years ago. I ran into her at the club. She said I'm a director of TV and shorts and I have a script I want to make a feature from, and I'd love to send it to you. I said okay and gave her my address and didn't think much of it. A few weeks later when I got back, it was waiting for me. Now I didn't think much of it because you know most, if not almost all, unsolicited screenplays are usually not well-written and certainly not very original material. But this one, just a few pages in and I'm intrigued. I'm like, "What's going on here? This is really good dialogue, very well drawn characters and it's really intriguing." The further I got, the more I liked it. It has a different pace, more thoughtful, with a lot of grey areas, which I really like. It's a story that kind of breathes and develops slowly and leaves you with a lot to think about at the end. I thought, well, if she's at all a good director, and can get any decent crew and cast together even on a low budget...

...this could be a really special movie?

It more than met my hopes. Everybody's who's seen it has said they were really surprised it was a first time effort because it's very self-assured and well told. I was really happy it turned out as well as it did. And it seems to be getting really great reactions. At the Toronto Film Festival, it was one of the most overwhelming reactions I've had in a screening, and the Q&A was remarkable. Most Q&As, even if they're great movies - certainly at festivals where people have a lot of parties and screenings to go to - not many people stick around. But at this one almost everyone stayed. And that was the first time a non-Spanish-speaking audience had seen it! So, I'm really happy for Ana. We just showed the movie at the Miami Film Festival and she won best director down there. I hope it gets seen by more than just the usual foreign film fans who go to the art house in New York and LA.

I hope so, too. It's artistic but has genre elements to it: mystery, thriller. Still it doesn't leave you with any simple resolution and really keeps its air of mystery all the way to the end.

I think most people aren't used to that any more in movies. Cronenberg does that, which is why I like working with him. [I like] movies that engage you and provoke thought, movies that ask a lot of questions but don't necessarily answer a lot of questions. Hopefully, they do it in an artful way and that's something to play with and think about.

It's a delicate balancing act. It really is amazing that a first-timer could pull it off.

Exactly. And she was really calm on the set. Kind of like Cronenberg, really. Very calm and with a good sense of humor. Well-prepared. And patient! It took a long time to get this movie made. She showed a lot of promise and I think she's definitely a director to watch.

This character is something of an enigma himself - it's as if the film wants you to be asking why he does what he does and still not be sure. And to boot you also play his twin. How do you crack that role?

Whether I'm playing twins or not, I always ask myself what's on the page, and what's underneath the words and between the words. I question what happens from the moment the character was born until page one of the script. As I fill in the blanks, by the time I get to shoot, I have a lot of information and a lot to go on. Every story asks for different things, I don't think there is any one way to do it. I don't think there is any such thing as "Method Acting" because method is "what works," you know? And what works for one movie doesn't necessarily work for another. I mean if I'm playing a Russian character, I have to learn a lot: I'm not Russian. I don't speak Russian. On this movie, I speak Spanish and I was raised speaking Spanish in [Argentina], so I did have a leg up and I knew the landscape. But as far as differentiating between the characters, you know, that takes some work. It was fun, though. I still enjoy it after all these years, like a kid who enjoys something and doesn't question it. But it takes a conscious effort for an adult. Any child, it doesn't matter who they are in the world, doesn't question. They just do it in a pure sense. It's that state, in a more sophisticated way, that I try to arrive at, where I'm just having fun and it's just play. Once I have all the preparation under my belt, then I can have fun and listen to the director and listen to the other actors and really play make believe.

Is there any type of role you're specifically looking to do?

I don't really think in terms of directors or kinds of roles or genres or budget. I'm just looking to do movies like Everybody Has a Plan and The Two Faces of January, types of a character that I haven't played before and stories that have a chance to be movies I want to see again and again, years from now. That's what I look for: the kind of movies I'd want to see.

Sounds like a good strategy. Okay, finally, just because this movie's set in Argentina, you've lived there and love it, I have to ask: what do you think about the new pope being an Argentine?

Well, what I'm more interested in is that he's a life-long fan of San Lorenzo, which is the team I've been a fan of since I was a kid. I couldn't care less about the Vatican but if you got to be pope, you might as well be a fan of San Lorenzo. That I think is kind of fun. Also, there's the fact that he seems more personable and down to earth; his character to me seems to be, I don't know, warmer.

Well, having been educated by Jesuits, I'm really intrigued by the fact that he was a Jesuit.

Yeah, he didn't come from bureaucracy, the institutional route. He was a priest for the poor people, typical Jesuit. That's probably why he's more personable and more humble. I mean, you don't get to be pope or president without making some enemies, but I think he's an intriguing person.

Okay, so what's the story on San Lorenzo: what's their vibe? I remember on Two Faces in Istanbul you went to a Besiktas game, they're kind of the blue collar team there, and it was in the Turkish papers the next day that you wore a Besiktas jersey. Are they at all similar?

San Lorenzo's not unlike Besiktas, and that's why I wore their shirt. The fans of Besiktas are singing the whole game no matter what the score is; there's something similar in that sense to a San Lorenzo fan. And it was a team that was founded by a Jesuit priest, Lorenzo Massa. He had a parish in that neighborhood of Buenos Aires, and there were lots of kids who used to play soccer in the street all the time. One day one of the kids was almost run over by a trolley car and the priest said okay, that's enough, come inside. And in the big courtyard of the Church, he said you can play here and he eventually provided them uniforms and everything! So that's how the team was founded and they wanted to call it Lorenzo Massa, and he said, "nah," but you can call it San Lorenzo in honor of the saint. And that was in 1908. Then he went on to travel a lot in the country, and worked with indigenous people and poor people. He was a really unusual man actually. So, Bergoglio, it was natural for him to be a fan. And when he was a kid in the late 40s, they were a fantastic team. In fact the 1946 team were champions and they had a tour when they were on holiday in January, in Portugal and Spain. They were just playing for fun, they were on vacation, and the only team to beat them was Real Madrid 4-2. They beat the Spanish national team twice by several goals, and they beat the Portuguese team by like 11-1 or something.

Yeah, it was the first team to pass the ball a lot, the way Barcelona does now. Anyway, that's the team that the present pope grew up with. He followed them his whole life and is a card-carrying member. In fact, an interesting thing happened. The day he was elected pope, somebody took the number from his membership and that number won the lottery!

Does this mean that San Lorenzo is now officially God's team?

Well... the good thing about it is I don't have to go around explaining to everybody what San Lorenzo is as much in my travels.