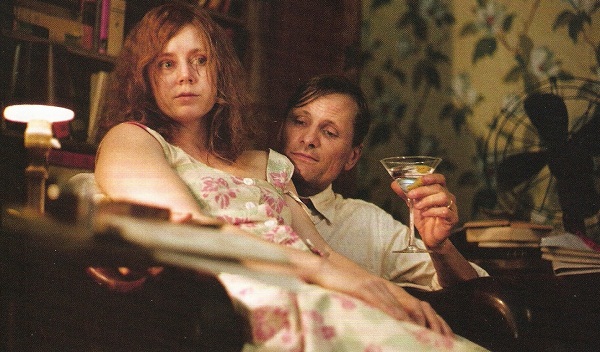 Today, April 5, 2013, his newest movie, On the Road opens locally in Miami, Boca Raton and Sarasota. I was given the opportunity to interview Viggo Mortensen recently. Among the topics we discussed included challenges he faced in Everybody Has a Plan, what some of his future projects were and his proudest moments from Perceval Press, a company he founded.

What was it in your life that made you decide to become an actor?

Good question. Perhaps the fact that I grew up on the move, with my family living in so many different places and different cultures, had something to do with it. Being an actor, imitating to the point of inhabiting the lives of others, may simply be a way of continuing to do what I learned to do as a boy - to travel, mentally and physically.

I know you speak perfect Spanish, so what was the most challenging aspect of taking on the dual roles in Everybody Has a Plan?

Making sure that the twin brothers I played, 'Agustín' and 'Pedro', really seemed like two separate individuals.

In truth I thought of David several times while working with Ana on Everybody Has a Plan. She was extremely thorough in her preparation for the shoot, and quite knowledgeable with regard to both the technical side of movie-making and in her handling of the actors. We were able to communicate a lot about the story long before the shoot, so were consequently well in-sync on the first day, not unlike my experience with David has been. Of course, he has much more experience than Ana, and therefore the ability to deal with unexpected obstacles more easily on the set, but I have to say that she, too, was remarkably calm at all times. Both are positive people, good problem solvers. Many of those who have seen our movie have expressed admiration for the maturity of Ana's work, and have been surprised to learn that this was her first full-length feature.

I do not find the two to be all that different in terms of what is required of the actor. If I believe in what I am doing and saying, chances are that a good portion of the audience will in either medium. A play does require a different sort of endurance, though, especially if you are onstage during most of the show. There is no "cut" or "take two". A kind of resilience and, at times, improvisational agility is required to keep a play moving along in the right way - whereas if everything falls apart while shooting a movie scene, you usually get another crack at it. The pressures are different. I like the detail work of telling a story in small pieces, as is done in movie-making, and also the long leap of faith needed to see a theatre performance through each night. Both require focus and self-discipline.

It appears you are very particular about the roles you choose. On average, how many scripts do you generally go through before choosing a new role?

No idea how many; it probably varies. I'm an optimist; I always hope that each new script is going to be a great story. Every year I hear people complain that the quality of screenplays and movies is declining. In my opinion, the vast majority of scripts written - as well as most movies that are released - are not very original, well-written, or interesting. It has always been that way, and I think it always will be. If the problem could be solved by throwing money at mediocre stories, or simply putting them in the hands of talented directors and actors, we would have hundreds of great movies to go see each year. It's hard to write a good, original script, and even harder to get it financed and made into a movie. That does not leave much room for true artistic innovation to come from the annual selection of green-lit projects.

What new projects do you have coming up now?

First up, starting in April, I'll be participating in the shooting of Argentine director Lisandro Alonso's new, as-yet-untitled movie. It is a story set in the 1880s in the Pampas prairie, in the middle of the genocidal military offensive against various native tribes in that country - the same thing that was going on in western North America at that time. I play a Danish military officer who rides alone out into the vast frontier territory in search of his teenaged daughter, who has eloped with a young Argentine soldier. Then, in October, I'll be working for French director David Oelhoffen on a movie set in the late 1950s in Algeria, when the fight for independence from France was beginning to really heat up. In that one I play an Algerian-born school teacher. It is based on an Albert Camus short story, and will be called Loin des hommes (Far From Men).

Is there a genre of film you haven't worked in yet, but would like to?

I've never been conscious of having any real career plan, and I do not have a wish-list of actors, directors, screenwriters, or cameramen I'm hoping to work with. Life, I feel, has a way of leading us to the right situations and people, or at least to interesting ones. There are many talented individuals in this art form, but if there is one thing I have learned during the thirty years that I have been working as an actor in the movies it is that there is always a surprise around the corner. Stories and performances you would not expect to work, full of moments of rare beauty, humor, and inspiration. As an audience member, every time the lights go down and the images begin to dance in front of me, I am hoping for that kind of story, those sorts of moments. As a person who helps to tell movie stories, I'm always looking for a script and accompanying circumstances - or hoping they find me - that will take me on an unusual journey. The movies I try to be part of are the ones that I might want to see a second time, perhaps many years from now, regardless of their genre or authorship.

I'd be remiss if I did not ask one question about The Lord of the Rings, what sort of impact did those movies have on your career?

Their success brought me, as they did to my fellow Lord of the Rings cast members, a remarkable burst of recognition from the movie-going public, and from those who do the hiring in our business. At least for a time, this gave me access to a greater variety of movie projects that I could conceivably be cast in. Within my possibilities for doing so, I have tried to choose well, to be part of telling good stories.

Can you share some of your proudest moments and/or people that have come from your formation of Perceval Press?

There are many people that I am grateful to and proud of having worked with. To name a few: Pilar Perez, who started the business with me in 2002 and was instrumental in establishing the reputation of Perceval Press in its formative years; to Michele Perez, who has beautifully designed all of our publications; to Hugh Milstein, who has helped us make press-ready nearly all of the images we have published; to Gráficas Jomagar, where we have printed all but a couple of our books; to Walter Mortensen, without whom it would have been impossible to keep making quality books all this time; and to the many people around the world who have consistently taken an interest in our publications. It is a real pleasure to be able to assist, in my capacity as editor, all manner of artists present their work in the way they dreamed it, with the appropriate words and images, in an attempt to be faithful to their particular visions. At Perceval we are always looking ahead, trying to nurture new projects, giving authors the time and care they need. As with the movies I have been involved in, I always try to publish books that tell stories worthy of being revisited.

Finally, Viggo, what do you love most about acting?

The ongoing journey of it, and its unexpected consequences. It is hard to know at any given time if you are making the right decisions as an artist, but the surest way to stay in the moment and make progress in this moveable feast of a profession is to say "yes" as often as you can. As Yogi Berra once said: "If you come to a fork in the road, take it."
Top of this page
Last edited: 18 April 2014 11:27:14
© Examiner.com.