Viggo Mortensen - Letter To My Younger Self

Source: The Big Issue
Viggo Mortensen, 54, on childhood screen tests, his romantic teenage years, and feeling like an 'alien life-form' 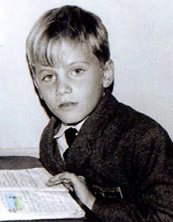 © Viggo Mortensen.
I remember my first year of school when my family moved to the United States from Argentina, they had this thing in the morning: a pledge of allegiance to the flag. I didn't know the words and mumbled them. The teacher said: "You - you don't know the words!" That was embarrassing. After a few days I realised it was, "Liberty and justice for all". That's it. I know it now.

Before school started each day, the kids used to gather outside on this grassy sidewalk. At that age, the kids tended to be in groups of girls and boys. It wouldn't do at all for you to be by yourself. I would stand near groups of boys so it seemed to the girls, in particular, like I wasn't standing alone. I hadn't grown up with these kids. I was an alien life-form, that's what it felt like.

I had no intention of being an actor. I've always been kind of happy being by myself. I was a teenager in my own quiet way, sullen and quiet, living in my own world. I didn't really go out destroying property... I mean, I did a little of that but not really much, like snowballs at police cars. I never had problems with animals of any kind and I didn't mind getting lost, but I would run from crowds of people. Acting would have been the last thing I would have thought of doing.

My heroes were explorers, Ancient Greek heroes or cowboys like Martín Fierro [a Gaucho character from Argentinian writer José Hernández's epic poem of the same name]. Above all were the players for the San Lorenzo football team. I always had a thing for explorers, people who went to places other people hadn't been to and tried things other people hadn't tried. If I was 16 right now, I would be really interested in the guy who skydived, Felix Baumgartner.

I wanted to learn how to act, as a kind of a practical thing. I was interested in movies and since I was very little my mom took me to see them a lot. In the first years that I tried it as a career, I kept having screen tests and it got down to me and one other person for a lead role in a movie. I kept going. I never had to deal with playing a major part in a movie for years. So I learned the craft but didn't have to go to premieres, which was probably good for me.

If a girl liked me it would be kind of terrifying. As I wasn't one for parties or social interaction, I was kind of awkward in how I would interact. I used to wear pyjama tops or shirts because they were comfortable. I think people thought I was really strange. I have one now that I wear sometimes with footballs on it.

One time I actually wore a big floppy hat, but that was post-hippie days. I was 14 or 15 with very long hair, a big floppy hat and a pheasant feather sticking out. With adolescence I became a little more impulsive. Whenever I would have a girlfriend, I would always have pretty romantic notions about it. I thought I would be with this person for ever. In the top three things for my younger self to look forward to, I would say: falling in love, having a son and travelling.

Is there anything I should definitely have avoided as a teenager? Drug use. Not that I was terrible. No, actually, scratch that one because I don't entirely disapprove of that. Of course I have regrets about things I did or didn't do, even as an adult. I think everybody has that. I have gradually learned to be more in the present, learn things and move forward. Otherwise you go crazy.

In 1974, the year Viggo turns 16... The Terracotta Army is discovered in Xi'an, China... Muhammad Ali beats George Foreman in the Rumble in the Jungle in Kinshasa, Zaire... The Rubik's Cube is invented... Turkey launches a military invasion of Cyprus...