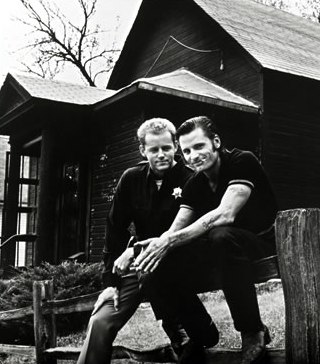 © Westmount.
When he made his directorial debut, Sean Penn - already established as a charismatic, edgy leading man but equally well-known for the paparazzi run-ins during his tenure as Mr Madonna - chose a typically unconventional route.

Rather than settle himself in gently by working with an established Hollywood scribe on a project already in the development process he wrote his own screenplay, which expanded a three-minute Bruce Springsteen song into a two-hour movie.

The end result may not be perfect but it's still a brave, heartfelt film that's worth revisiting in the context of his subsequent career and features a striking early turn from an actor who'd eventually contribute in no small measure to one of the most successful film franchises ever.

Looking back, it's no great surprise that Springsteen's short stories, set to music, of blue-collar protagonists trying to get by in a hostile world would appeal to Penn. He'd already garnered a reputation for gritty intensity in his performances - as the likes of At Close Range and Casualties of War can testify - and for political activism off-screen.

Highway Patrolman - which featured on the 1982 album Nebraska, the first of The Boss's stripped-down, rootsy efforts and had already won the accolade of a cover version by Johnny Cash - was an almost archetypal Springsteen song: a Biblical tale of the conflict between two brothers with nothing in common but blood ties, set against the backdrop of the Midwestern farm belt in the post-Vietnam era.

The movies have often inspired songs, but there's been markedly less traffic in the other direction. Probably because the intense, lyrical pleasure of the three-minute classic is hard to sustain for hours on end, and the internal logic of even the most 'realistic' narrative-driven songs doesn't stand up to the scrutiny that a full-length film demands.

Penn tackles the problem by expanding out on the song's hints at its central characters' backstories and throwing in a chunk of an even older American mythology - the 'Indian Runner' of the title, a hunter and messenger eternally pushing himself to extremes, braving the dangers and beauties of nature.

Both of the film's brothers have elements of this archetypal character. Joe (David Morse) is a one-time farmer forced to give up his home and land who now works as a State patrolman, essentially filling the role of an Old West sheriff in a job that can switch in an instant from listening to the mundane problems of local eccentrics to the film's memorable opening scene - confronting and killing a drunk-driver with a gun in self-defence.

He misses his old life and is haunted by the traumas of the job, but takes comfort in the simple pleasures of family life with his wife Maria (Valeria Golino), young son, and also in being a dutiful son in turn to his reserved, taciturn father (Charles Bronson).

Frankie (Viggo Mortensen) is his polar opposite ? a volatile eternal drifter whose time in Vietnam, it becomes clear on his return, was merely an extreme example of a constant desire to escape the routine of work and home which he sees as imprisoning the rest of his family.

Joe attempts to steer his brother in the right direction, landing him a job at a local construction site and giving house room both to him and his girlfriend Dorothy (Patricia Arquette), a naive but loving hippyish free spirit. For a time, all seems well, but Frankie's demons constantly resurface and in his capacity for violence Joe sees an uncomfortable shadow of the direction his own life might have taken...

In truth, the film does take its own good time to get to a climax that you'll probably see coming. Penn has a fellow actor's affinity with his performers, but this leads to a certain amount of showboating in the 'big scenes' where more brevity and intensity would serve the story better. The curse of the multi-hyphenate strikes again when it comes to the script, with the director unwilling to trim down his own interesting and literate but undeniably over-wordy screenplay.

The flaws are obvious but the compensations many. Penn had a definite feel for the incidental details and the everyday rhythms of small-town life. The camera-work is unflashy and the storytelling uncomplicated but it evokes the classic straight-arrow family dramas of the 1950s as well as darker, more noirish efforts such as Nicholas Ray's They Live By Night. There's even a touch of David Lynch in the depiction of the town's darker reaches and stranger rituals (trust me, you've never seen a wedding scene quite like the one here).

And the performances, when Penn exercises proper restraint, are impressive. Morse, who seems to have been a reliable supporting player in Hollywood since the late 13th century, proves himself more than equal to taking on a leading role. As Joe, he achieves the difficult task of making genuine decency interesting, painting a convincing picture of a man simply determined not to let life's cruelties and disappointments make him cynical or uncaring.

As Frankie, Mortensen has a plum role for an actor starting out and grabs it with both hands. Deploying that unsettling stare and those bacon-slicer cheekbones for the first time, he creates a memorably feral, seductive and unpredictable lost soul with a capacity to switch from charm to menace in an instant that brings to mind a young Kirk Douglas. It's no surprise that after this he was in regular demand for characters right across the spectrum even before Lord Of The Rings sent him stratospheric. The sheer charisma and screen presence he exhibited there, and in gems such as A History Of Violence and Eastern Promises since, are already plainly in evidence.

Golino and Arquette acquit themselves well in comparatively underwritten roles and Bronson's brief but effective appearances make you wish he'd stayed with us longer. Older, quieter and wiser than in his Hollywood tough guy heyday, his portrayal of a man unused to emotion and closer in spirit to Frankie than Joe hints at a capacity for great 'elder statesman' roles that were sadly not to be.

Dennis Hopper as an ageing outlaw barman is a refreshingly out-there presence in a somewhat too-serious film, as well as representing the temptations of a nihilistic lifestyle that Frankie can never quite shake off. And there's a blink-and-you'll-miss him but characteristically memorable appearance by a youthful Benicio Del Toro.

Penn would go on throughout the 90s to impress as both actor and director. The Crossing Guard, The Pledge and Into The Wild are undoubtedly more assured, accomplished films but by debut standards this is undeniably impressive. Not quite a solid gold classic but definitely worth putting back on the turntable now and again.