By Lisandro Alonso - translated by Ollie, Rio and Zoe

Source: Cahiers du Cinema
Change of course for Lisandro Alonso: the film-maker is preparing a movie with Viggo Mortensen, producer and actor. 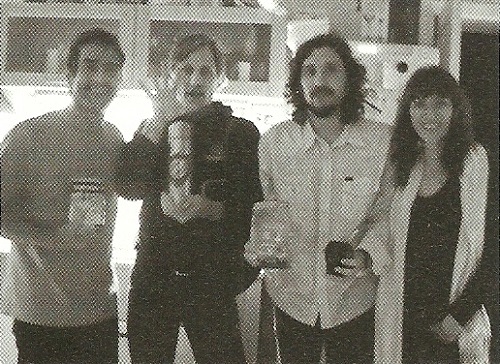 Viggo Mortensen and Lisandro Alonso in July 2012.
© Kamoli Film.
Four years after the release of Liverpool, Lisandro Alonso is getting ready to film in April his new long feature, still without a title. The story? Impossible to summarize. It´s a short script - twenty pages - but it´s better to let the film-maker tell you himself.

There where Patagonia begins

The action begins in present day Denmark. A beautiful young woman is walking her dog in the forest and she suddenly vanishes before reappearing in 1860 in the Argentinian desert, to the south of the Pampa and the north of Rio Negro, there where Patagonia begins. We meet her again along with her partner, a certain Blisken, played by Viggo Mortensen, and his 14 year old daughter. They are in the middle of the desert with a small troop of two or three Argentinian soldiers to explore the territory and see how they can make it fruitful. It is during the time in Argentina that is called The Campaign of the Desert, when the government tried to evict all the Indians. The film takes place in twenty four hours. It begins at five o´clock in the afternoon and ends the next day at the same time. Blisken´s daughter runs away in the company of one of the soldiers, with whom she begins a relationship. Then Blisken embarks on a search for her and leaves his partner behind. When he finds them, they are dying, having certainly been murdered by the Indians. Then the film enters an imaginary zone, a new dimension which corresponds with Blisken´s subconscious. Alone and exhausted in the desert, with only his horse and a few dogs around him. Until he meets a 70 year old woman with whom he engages in an existentialist discussion about the loss of the loved ones and the family. I would love the character of the old woman with whom Blisken speaks in Danish to be played by Grace Zabriskie, the actress from Inland Empire and Twin Peaks, because she resembles a lot Blisken´s partner, so she would be the same character, but in the future. The idea is that once the film is over, we can´t discern very well in what period it takes place - the Denmark of today or the Argentina of a century and a half earlier? Whether what we have seen in Denmark at the beginning of the film represents what the woman in Argentina imagines or vice versa? There is a present time, a past time and afterwards this "no-time" that can remind you of Tarkowski´s films or the end of Kubrick´s 2001.

When I began taking part in festivals in 2003 to present Los Muertos, I met Nika Bohinc, a Slovenian film journalist. We became close friends and I saw her every time I came to Europe. In 2008, in Vienna, she told me she had met a film critic, Alexis Tioseco, and that she was going to follow him to settle down in the Philippines. On September 5 2009, I received an email telling me that Nika and Alexis had been found murdered in their home in Manila. Unfortunately, sometimes you find yourself in the wrong place at the wrong time. This drama affected me deeply and it has marked the writing of the script. I have written it with Fabián Casas, an Argentinian poet whose novel Ocio was adapted in 2010 by Juan Villegas and Alejandro Lingenti. Fabián had given me to read La guerre dans la Pampa: Souvenirs et récits de la frontiere argentine (1876-1979) [trans. note: The war in the Pampa: Memories and stories of the Argentinian Border (1876-1979)], a book written by Alfred Ebelot, a Frenchman sent on an expedition to see how to exploit the Latin American continent (particularly the mines in Chile). He arrived at the harbour in Buenos Aires and went on horse to Santiago de Chile. Ebelot tells about the Gauchos and Indians way of living. And I´ve used some of the facts contained in this book for the film.

At first I thought I would make a film about an English family, which would have been plausible as in Argentina the first settlers were the Spaniards before the English arrived. But I didn´t want to give the film a historical dimension and that people could pay attention to the clothes or the behaviour of the English who lived in the 19 century. It turns out that Fabián Casas is a good friend of Viggo Mortensen; they are both supporters of the San Lorenzo soccer club. The fact of choosing him as an actor and making the film about a Danish family seemed to me more strange and, therefore, more appropriate.

The choice of working with him is certainly very different from my previous films, where I filmed non-professional actors [Misael Saavedra inLa Libertad and Argentino Vargas inLos Muertos, both of them together inFantasma. ed,] but I don't see Viggo Mortensen as a Hollywood star. He is an extremely charismatic actor who doesn´t speak too much, he is all physicality. His acting gives priority to body-language and the gaze. Moreover, he grew up in Argentina. His father managed an estancia [trans. note: a farm] in Chaco, in Santa Fe. So he knows the country, can ride a horse and, above all, speaks perfect Spanish. He is certainly a great actor but he also is - and maybe this is as important to me - a publisher of poetry, painting and photography books. Several years ago, he published a book of Argentinian poets. So he has other interests apart from acting. He can do The Lord of the Rings but also, as he did last year, act in, Todos tenemos un plan, the first film of an unknown Argentinian director. He´s an actor who takes risks, as he proves by acting in my film. According to him, it´s an experimental movie, and coming from him it might seem this is a film by Andy Warhol. But he knows very well what he´s doing. He´s seen Los Muertos four times and he´s completely aware of the risks he´s taking, the same as me. He will also produce the film [with Sylvie Pialat]. I´m also aware that Viggo Mortensen´s notoriety will bring me much more visibility. He knows and I know. But that doesn´t mean the film will be a box-office hit because it hasn't been conceived to be one. But it will facilitate me access to a wider distribution, and, when seeing a film with Viggo Mortensen it will allow people who don´t attend festivals and don´t read reviews to discover a strange film they didn´t expect. And as regards to the success or not of the film, one never knows what can happen with an Argentinian audience. Films like Alexandre Sokourov´s The Russian Ark, Abbas Kirostami´s Taste of Cherry or Inland Empire by David Lynch met with surprising success in Argentina.

I want to work with Timo Salminen, Aki Kurismaki´s cinematographer. I want a very artificial and hard light in order not to charge the story emotionally or with nostalgia. I need to make something different, more crazy than what I was doing before. The different times that will exist in the film will allow me to propose different kinds of interpretation to the spectator. We have entered a new modernity that, in my point of view, demands new stories. Nowadays, surfing through Internet you can begin researching about a dog´s breed and end up watching an NBA basketball game. You enter one site and end in another. There already are films that have stopped having only one level of interpretation to suggest two, even three. The films by Miguel Gomes, This Dear Month of August as well as Tabu alternate several stories and you let yourself go. With hundreds of TV channels, mobile phones, Facebook or Twitter, you are continuously taken from one thing to another. I want to try to get into that and see what comes up. And I feel the same curiosity, the same need as ten years ago when I had the whim to go and film Misael in the middle of the country and people would tell me that wasn´t at all interesting. I feel that same energy now. And it seems to me that´s the same curiosity experienced by Kirostami at the time of filming Certified Copy in Italy or Like Someone in Love in Japan. It seems important to me not to confine yourself to your own way of filming or always to keep on making the same film."
Top of this page
Last edited: 18 April 2014 11:30:47