"I love leading an itinerant life"

By P. S. - translated by Ollie and Zoe 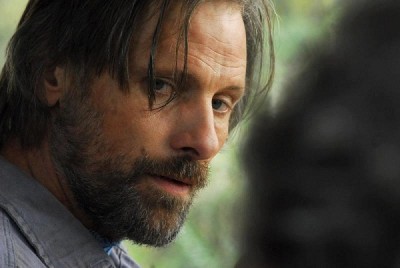 Image John Harris.
© 20th Century Fox/Haddock Films.
During his fleeting stop in Buenos Aires, the actor received us to tell us about Todos tenemos un plan, a film that marks his debut in the national cinema. Charismatic and with a prolific renaissance spìrit, he talks about his son, his current partner, Spaniard Ariadna Gil, and about all those sharp edges that make him the most porteño of Hollywood stars.

He enters the hotel slowly and in his wake appear neither press people nor all sorts of assistants, but rather a hefty Brazilian tourist looking stressed. And then something unusual happens: for a few minutes the huge Aragorn of The Lord of the Rings, the most Argentinian of Hollywood stars, becomes a doorman, holding the door not only for the good gentleman to come in, but for him to go and pick up each one of his 4 bags from the cab. That humility, praised by many, is combined as well with a contagious calmness, visible in every movement and in every word, making this man born in New York, but who lived in Argentina all of his childhood, a truly irresistible character. "Many times haste delays understanding," he will say at one point and the sentence will serve to explain his frugality and also his passion for diversifying himself, without any kind of fuss, on many fronts. It could be painting, poetry, photography, publishing (his own publishing house is called Perceval Press) and, of course, acting, the trade that brought him to Buenos Aires for a short time to present Todos tenemos un plan, Ana Piterbarg's first work, in which he is making his debut in the national cinema together with colleagues Soledad Villamil, Daniel Fanego and Sofía Gala Castiglione. In the film, Viggo (currently the partner of Spanish actress Ariadna Gil and father of Henry Blake Mortensen, a son from a previous marriage) plays two twin brothers whose lives intersect with a mysterious objective involved as well.


As happens in this story, have you sometimes wanted to leave everything behind, transform yourself into another person and say goodbye to your life?

Mmm...maybe when I was young, since it's an idea that has a lot of romanticism and adventure, because it's about setting out to discover the world, right? Now that I think about it, I still have a little bit of that, partly because acting is like that and also because I love leading an itinerant life. At the present moment, my home is in Madrid, but I continue traveling to the U.S. and Denmark whenever I can. And to Argentina, of course, a place where I have no relatives, but I do have a "family" that's an entire country.

Is your son familiar with Buenos Aires?

He only came here once, for scarcely a day and a half, but he knows that he has to return and travel around, as it deserves. He's a grown man already; he's 24 years old. He's finished studying anthropology in Los Angeles and is about to move to London for postgraduate work.

He never wanted to act?

Yes, and he did it extremely well, I must say. He's also a musician and writes very well. As you can see, he has many interests. Like me? (He smiles) Yes, could be, and maybe that's why I always try to support him. It was difficult for me when my father said to me, "Look for something else. You don't want to be washing glasses and moving furniture while you wait for someone to give you a position." He wasn't doing it to be nasty, but with my insecurities at that moment, I already had enough to deal with... Today, I advise Henry: "Try everything you want, follow your heart, your instincts."

Does long distance fatherhood get difficult?

Not too much, because we're always looking for ways to be together. The only time that we were separated for a long time was during the filming of The Lord of the Rings, which, although we had breaks in the middle, lasted four years.

And with Ariadna, has leading such a nomadic life ever been a problem?

We mutually support and understand each other. At times, this profession can be very difficult. There are many things that people don´t see and which carry with them a whole maturing process, be that creating a character or adapting to a life that´s constantly changing. I need my moments of silence and solitude, but apart from that, it´s nice to know that there´s someone at your side who supports you unconditionally.

Even if you don´t look like it, you are 54. Does the passing of time worry you?

(Thinks) I don´t want to die, that´s for sure.There are so many things to do, places to know, books and films to discover. Time always seems short to me.

Do you take better care of yourself because of that?

I usually do a lot of exercise, and although I feel very well physically, truth is I shouldn´t be drinking gin as I have recently. I shouldn´t be smoking a single cigarette either. Luckily, I inherited my parents' good genes and it´s not necessary for me to be taking care of myself excessively all the time. But, in addition, life would be too boring, don´t you think?

A fan of toffee alfajores [tr. note: filled sponge cakes], Viggo retains several Argentinian tastes: gin (the drink that's his companion in Todos tenemos un plan) and of course, meat. "I remember that I when I lived here I ate milanesas [tr. note: breaded veal) with french fries all the time. As far as I can see, Argentina has become less carnivorous. And so have I. Anyway, good asados [tr note: grilled meat] can still do it for me," he says and reveals a secret thing about London: In the Hackney neighborhood, to the east of the city, there's a grill above Broadway Market Street that's called El Buen Ayre. The owners are Argentinians and have the best back meat you can eat outside of this country." The word from Viggo.