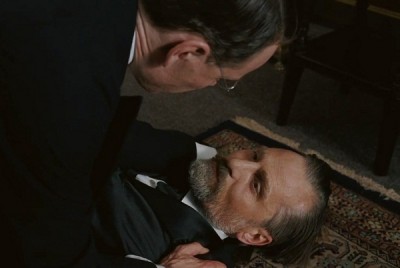 © Hanway/Lago.
What may at first appear to be a fictionalized portrayal of sexual intrigue between famed psychological giants Freud and Jung turns out be a fictionalized portrayal of the birth of modern psychology as seen through the eyes of its biggest players at the turn of the 20th century, but to damn a movie like this with such a simple banner is as big of a mistake one can make; when any film is helmed by filmmaking master David Cronenberg, it warrants attention that goes far beyond any living maker today.

Cronenberg got his start in the late 70's directing a few obscure but intelligent horror films, his career blossoming in the early 80's by merit of this intelligence culminating with the sci-fi horror re-make and masterpiece emeritus The Fly. With this crowning achievement, Cronenberg opted into his cerebral approach to filmmaking and moved into psychological thrillers and trenchant dramas in every arena ranging from medicine to crime. To many, his introduction would be from the highly lauded A History Of Violence.

Here, Cronenberg delves into psychological method with explosive results. Rather than focusing his attention on the aforementioned fathers of psychoanalysis and analytical psychology, he chooses to present the time period around which the birth of psychological thought was forged. Here, the film's title finds its expression; different approaches and thought processes informed our current perception of psychology, and after the biggest players, we are introduced to lesser known counterparts in Sabina Spielrein and Otto Gross. Spielrein, as we discover, was first a patient of Jung's and evolved into a romantic interest and eventually a respected psychologist in her own right, while Gross' obsession with sexual liberation and anarchy would be his undoing well after he helped inform Jung's processes.

Naturally this film doesn't choose to do supreme justice to historical record, as it is a work of fiction intended to entertain. Across the board, the performances are extraordinary. Michael Fassbender continues his meteoric rise to the echelon of the world's greatest actors as Jung and Viggo Mortensen brings playfulness and fortitude to the complex Freud. Keira Knightley steals the show as the unstable but frighteningly human Spielrein, and Vincent Cassel blows the doors off with his sick, menacing, achingly brilliant Gross.

What makes this film so absorbing is at once unnoticeable and entirely encompassing; each scene between characters taken individually and in a larger context depicts aspects of psychology that transcend mere methodology, making it both a period drama and a study of psychology so dense that multiple viewings are required to begin understanding the effect of each scene. Put simply, it's must-see visionary filmmaking that maintains its entertainment value while leaving an indelible stamp as a film of intelligence and poignancy.
Top of this page
Last edited: 31 October 2012 19:55:04