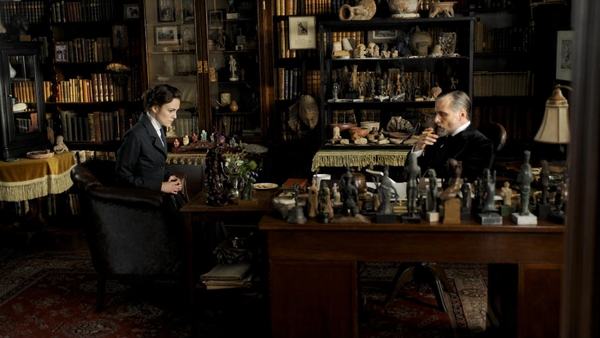 © Hanway/Lago.
Danger has been a factor in the recent films of David Cronenberg, but the tension and anxiety has been focused on the physical, the threat of bodily harm and the need to determine where said harm would originate.

Would, as in the 2005 release A History of Violence, the fatal treacherous blow be delivered by the ordinary father and local shopkeeper hiding a dark and deadly past, full of buried secrets and even more bodies? Would the danger arise from actions that run counter to most basic characteristics of a Russian mob enforcer who finds himself taking on the role of protector (2007's Eastern Promises)?

Besides Cronenberg, the common thread in each case is the onscreen instrument of danger, localized in the person of Viggo Mortensen, the actor/Renaissance man who embodies a roguish intensity that is always one step (in any direction) away from a fall over the edge into the abyss.

And so it is fitting that Mortensen is back for another round with Cronenberg, even though this time the danger is not physical. Rather, it is about the methods employed to expose the vulnerabilities of the mind and psyche. To further twist and undermine our expectations, this devious duo seemingly deflects the threat of danger onto Michael Fassbender, an actor who, like Mortensen, possesses the same devilish charisma.

In A Dangerous Method, Fassbender plays a developing Carl Jung who engages Sigmund Freud (Mortensen), the godfather of modern psychoanalysis, as a mentor. Mortensen huffs and puffs away on cigars and oozes his usual menace, but here it is intellect-based: a dry probing and sparring that keeps Fassbender's Jung off-balance, in a field overloaded with fresh psychological bear-traps waiting to be sprung. This is pure chess, a mental game that suddenly jumps from the mind first into the emotional realm and then quite vividly into the physical, sensual world.

With cat-like ferocity and grace, Keira Knightley plays Sabina Spielrein, an unusual patient who by all accounts was incurable. Oversexed and beyond the mores of society ? but with a beautiful razor-sharp mind of her own ? Spielrein intrigues Jung. He sees her sex and the drive it inspires in her, yet deeper still he spots something of himself, a reflection of his own analytic theories which contrasted with Freud's and triggered his ambition and urge to break free from his mentor/father figure. The triangular entanglements ? sexual, psychological and intellectual ? are certainly mythic.

And so, obscured by all the smoke and deflection, stands Knightley as the linchpin, the true danger this time. As the center, she pushes herself and shows that, up to this point, what audiences have come to expect from her youth and thin beauty has been bound and corseted. Her Spielrein is a dark-eyed fury with a whip-snapping sexual nature that has never been captured like this before. Knightley is raw and naked, especially in scenes with Fassbender (who is no stranger to such displays), but she leaves everyone else exposed and vulnerable. Spielrein/Knightley seizes control. Spielrein lasers in her mental focus, while Knightley sinks her teeth into every available morsel in the frame and refuses to let go.

Knightley joins the likes of Elizabeth Olsen and Kirsten Dunst, young actresses who during the past year found methods to move themselves out of the pretty It-girl roles and into stark and startling new challenges, the kind of character studies usually reserved for older actresses or actors like Mortensen and Fassbender.

What has likely made such turns easier to understand and appreciate from male actors is that these roles are sometimes born from the alter-ego dynamics between the actors and their directors. Mortensen and Cronenberg could be viewed as merely the next generation in the Martin Scorsese/Robert De Niro (Mean Streets, Taxi Driver, Raging Bull, et al). The elementally sympatico nature of that pairing exposes the more forced deficiencies of Scorsese's recent string with Leonardo DiCaprio (Gangs of New York, The Departed, Shutter Island).

But it is encouraging to see A Dangerous Method, which may be one of the first attempts to create a Scorsese/De Niro-like bond between an actress and director. If anyone could devise a method to bring that about, it would be Cronenberg. And Knightley sure seems game enough to play along.