A Dangerous Method: It's risky, but it works 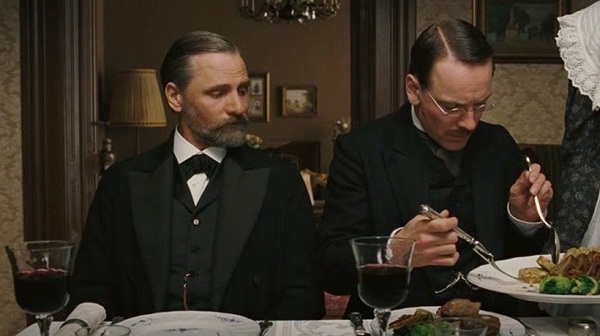 © Hanway/Lago.
Deceptively elegant and coolly passionate, David Cronenberg's masterly thriller A Dangerous Method, about the birth of psychoanalysis, begins like a horror movie. An ominous coach is drawn by two black horses through the Swiss countryside. Inside, a young woman is being restrained by two men, her screams gradually drowned out by the crescendo of the orchestral score as the coach pulls up in front of a mansion and the flailing woman is carried up the front steps. The place is Zurich's Burghölzli Clinic; the year is 1904.

We might be in a version of Dracula (written seven years before). The young woman, a psychiatric patient named Sabina Spielrein (Keira Knightley), writhes and juts out her chin like someone in the throes of demonic possession. The performance is risky, but the extremity of her condition sets up the miracle of her cure. After the initial shocking introduction, her condition subsides to a fevered simmer and her performance marks the film's central dramatic journey.

Her saviour is a handsome, reserved young doctor, Carl Jung (Michael Fassbender), who is gentle and curious about her condition. He wants to try the new "talking cure" that Dr. Sigmund Freud is promoting in Vienna. While he sits behind the patient and lets her talk, Jung determines that her obsession with sexual humiliation is the result of abuse at the hands of her father.

Christopher Hampton's script, adapted from his 2003 stage play The Talking Cure, which in turn was based on John Kerr's 1994 non-fiction book A Most Dangerous Method, gives a palpable sense of the pleasure Jung derived from his experiments with word association and dream analysis. It's no surprise that the highly intelligent Spielrein, once relieved of her symptoms, wants to study to be a psychoanalyst as well.

The third side of the story's psychiatric triangle forms two years later when Jung, in his early thirties, eventually meets the 50-year-old Freud (Viggo Mortensen) and the two men talk for 13 hours straight. Mortensen's sardonic performance sees the shrewd, possibly paranoid Viennese master waving his cigar to make his points and working to draw Jung into his movement. He sees the younger man as a potentially useful disciple, a Swiss Christian who can lend credibility to what has been regarded as a Viennese Jewish practice.

At the same time, they have differences: The mystically inclined Jung finds Freud's insistence on the "firm ground of sexual theory" too limiting and controversial. Later, when Freud sends a patient Jung's way, the younger doctor becomes aware of just how volatile a force sexuality can be. The patient is a cocaine-addicted dissolute psychoanalyst, Otto Gross (Vincent Cassel), who believes that all forms of repression are wrong. He sleeps with his patients as a matter of course. Given the green light from his patient-turned-counsellor, Jung begins a torrid affair with Spielrein, fulfilling her desire for sadomasochistic spanking.

The ferocity of their encounters is contrasted with the tranquility of Jung's home life with his pretty, astute and helpfully wealthy wife (Sarah Gadon). Throughout, the rhythm of the film is determined by similarly jolting transitions: Perfectly framed images and gliding camera shots of a costume drama cut to moments of intense physical immediacy.

At the heart of the drama, there's a betrayal. Jung, anguished but cowardly, decides he can no longer risk the potential scandal of the affair and breaks it off, later observing: "Sometimes you have to do something unforgivable to go on living." But Spielrein, ambitious and aggrieved, unbalances him when she decides to write to Freud with the plan of becoming his student. She also insists that Jung inform Freud of their affair.

The older doctor's disenchantment with Jung is further exacerbated in a well-calibrated sequence in which the two men travel together to the United States on a steam ship (the wealthy Jung, of course, goes first class). "Do you think they know we're on our way, bringing them the plague?" wisecracks Freud.

A Dangerous Method can be seen as a prequel to a horror movie, about the irrationality that would be unleashed in Europe in the next few decades. It's foreshadowed in one of Jung's visions of Lake Geneva filled with corpses, and alluded to in the film's postscript on the fate of Spielrein and her family in the Second World War. Mostly, though, A Dangerous Method is a suave chamber piece: a series of glimpses of two 20th-century intellectual titans, in friendship and separation, and the story of a remarkable woman who history had swallowed up, brought into the light again.