I lived through a somewhat schizophrenic weekend with a lot of travelling and little sleep. I had a rather weird but very special birthday. Halfway through the shoot in Greece and Turkey, I was with Ana Piterbarg for about 36 hours in England to support Todos tenemos un plan taking part in the London Film Festival. I arrived on Friday morning 10/19 straight from the filming of The Two Faces of January in Athens. On arriving in the English capital, I received my first gift when I learned the trust fund had been approved in the Porteña Legislature. The Return to Boedo is getting nearer all the time! The following day, my birthday, while I continued doing interviews with the English press, I received other extraordinary gifts. The most important was to see my son, who is in London studying anthropology. And then, during my last promotional commitment before returning to the airport to grab a night flight to Istanbul, I received some super cuervo gifts. First I briefly met some visitors from Boedo after an incredibly long interview (some 100 minutes) that they had me do for the Festival's "Screen Talk." I was becoming tired during that interminable chat, until I became aware of the presence of some Cuervos in the last row of the auditorium. I looked toward where "Vamos San Lorenzo!" [tr. note: "Go, San Lorenzo!"] was heard and I saw a few of ours wearing the colors. When I invited them to approach the stage, they gave me their hats, one of them exactly the same as the one that Gata Fernández wore when we ended up champions in 2007. 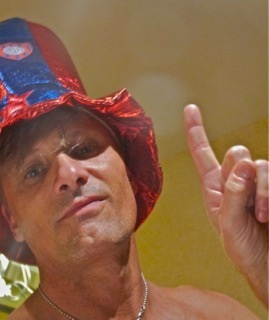 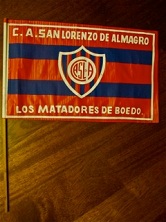 © Unknown.
Well, that's all. In this instalment, I don't offer you film, philosophy, or literary meditations. I just give thanks for my good fortune in staying alive and Cuervo in this world.
Top of this page
Last edited: 26 October 2012 20:06:24
© Viggo Mortensen/Club Atlético San Lorenzo de Almagro.