I Know That You Know I Know

Source: Clarin
The subject of the double and the confrontation of opposites is crucial in this thriller, that gets better when it takes place in the Delta. 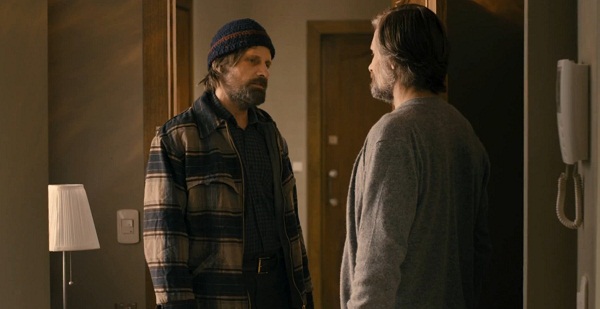 Trailer cap.
© 20th Century Fox.
Many are the themes of the first film of Ana Piterbarg which premieres today in the format of a thriller. The confrontation between opposites is the most evident, the one that clearly runs through the whole film. Two twin brothers with different personalities. The Delta and the city. The natural world and the urban. Sincerity and lies. And the most obvious, good and evil.

The configuration is that of the thriller, because there is a kidnapping and a death - there could potentially be others. But the film is also a drama, that of a man (Agustín) who is fed up with his ordered life and on glimpsing a chance to change, leaps in without taking the consequences into account.

Agustín (Viggo Mortensen) is a pediatrician, studious and timid, whose wife Claudia (Soledad Villamil in a character that merits better development) wants to adopt a baby. "I have nothing to give it. I'm no good for that," he says sincerely. "What is happening to you? Is there something you haven't told me?" is his wife's response.

Agustín's response will be unexpected for her, for him and for the audience.

When Claudia is away, Pedro, Agustín's twin, visits him. He is his antithesis. Pedro is a scruffy man sporting a beard. Agustín has begun to drink, to grow a beard and to let himself go in response to his wife leaving. There has been a kidnapping on the island in the Tigre Delta where the brothers spent their childhood and where Pedro makes his living by keeping bees. After that visit, Agustín will take on his twin's identity, travel to the Delta and try to pass for him.

The director delves into that duality between the urban and the rural, the story being much better when it takes place in the Delta than when the main characters are on solid ground. It may or may not be an intentional metaphor, but the change of location is abrupt.

The fact is that the characters in the Tigre are much richer. Agustín/Pedro is really a third main character to whom Mortensen offers that mask of ambiguity and fear that was so much required by the script. And basically, there is Rosa (Sofía Gala Castiglione), la Pichona, [tr. note: Pigeon, her nickname], the romantic interest of Pedro who helped him with the beehive and also of Adrián (Daniel Fanego); who know Pedro intimately so all of them feel disturbed in their encounters on this island.

The theme of the double is as old as cinema itself. Piterbarg shows herself to be a very good dialogue writer, although her script has, reveals (too many) literary winks. Perhaps it wasn't necessary to show the cover of a worn-out copy of The Exiles [Los desterrados] by Horacio Quiroga.

Technically the film gets 10 points - with great art direction - and Mortensen, who has given his all, is supported by Fanego with another great performance (remember ¡Atraco!).

"We all have evil inside," warns Rosa, and suggests not doing evil to others. The question is that many of these characters don't have a plan to fight against that, although they do for other things that support the title of the film.