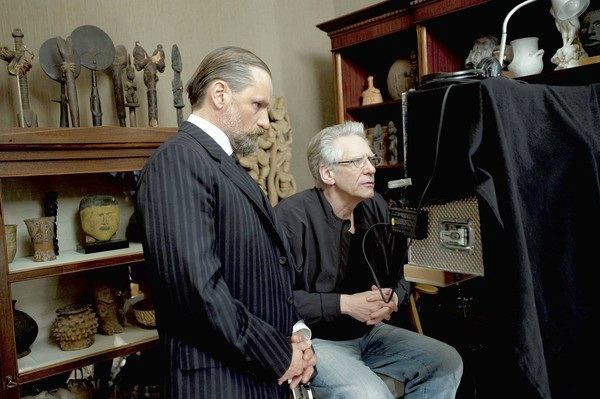 © Hanway/Lago/Sony.
By all rights, David Cronenberg and Viggo Mortensen should be mortal enemies.

Cronenberg, 68, a Toronto native with a storied career as a director, made his mark with body-mangling horror (The Fly, Videodrome) and roots for pro hockey's Maple Leafs.

Mortensen, 53, the Danish-American actor who lorded over The Lord of the Rings as warrior Aragorn, backs the rival Montreal Canadiens. And he likes nothing better than to rile the locals whenever attending the film festival here by proudly sporting his team's memorabilia.

Instead, they have melded into a potent creative unit as they talk about their just-opened third effort together, A Dangerous Method. The two are cut from the same cloth, thoughtful and perceptive. But there's also a remnant of sly humor.

As an apologetic Mortensen rushes into an interview about 10 minutes late, he asks Cronenberg, "What are you saying?" Teases the director with a pinch of French Canadian: "I am only saying bad things about you comme d'habitude" -- which means "as usual."

Their previous collaborations, 2005's A History of Violence and 2007's Eastern Promises (which earned Mortensen his first Oscar nomination), were action thrillers. Method, however, is a different sort of madness. As Cronenberg says, "It's the action of the mind."

Fans of both might be taken aback by the fact-based period piece that details the meeting of two titans of psychoanalysis, Vienna-based Sigmund Freud (Mortensen) and Swiss acolyte Carl Jung (Michael Fassbender), as World War I threatens.

The pair are proponents of the "talking cure," and Jung has found the perfect guinea pig to test out his theories: a highly intelligent yet acutely disturbed Russian woman, Sabina Spielrein, brought to life with jaw-jutting contortions and hysterical screams by Keira Knightley.

The subject matter isn't that strange for Cronenberg , who is quick to point out that his first film, a 1966 short titled Transfer, was about a psychiatrist and his patient.

But rarely has one of his films been so dialogue-driven, despite the occasional interlude of kinky S&M between the married Jung and Spielrein, an affair that caused a rift between the doctors. And rarely has Mortensen seemed so authoritarian and stately, even with a phallic cigar always within reach on-screen.

The director is aware that a film as dense with ideas as Method poses certain challenges for the audience. "We knew we were making a film that is like that," Cronenberg says, adding that a second viewing wouldn't hurt. "But there are a lot of instant-consumption movies. You eat them and they're gone."

One matter to chew over: a neo-hippie like Mortensen embodying the grizzled, tweed-suited father of psychiatry. Even the actor initially had a difficult time picturing himself as Freud. Says the director: "It's not obvious casting. It took a phone call from me to encourage Viggo."

Mortensen eventually gave in. "If another director had asked me, I probably wouldn't have taken the plunge. But because I know him and I trust him and we communicate well, I agreed. I wasn't sure. But then I felt there was something to it. It's fun to surprise people now and then. I feel good about it."

As someone who prides himself on his cultural pursuits beyond Hollywood, including painting, poetry and music, Mortensen managed to find a connection to Freud the artist.

"One of my favorite quotes of Freud's is when he says, 'Every place I go I find a poet has been there before me,' " Mortensen says. "He thought of himself as a literary figure. And other people did, too. There were academics who seriously were pushing for him to be nominated for a Nobel Prize. But there was a difference of opinion whether it should be for science or literature."

Darkened eyes, a fake nose, facial hair and about 20 extra pounds also helped him pull off the illusion. Besides, Cronenberg was showing a Freud in his prime. "Not the old frail man we all know, bearded and skinny," he says.

Given the shrink-wrapped circumstances, it's highly appropriate that Fassbender declares it was "just a dream" being a boundary-breaking Jung opposite Mortensen's wily Freud, adding, "He's such an original dude." As for Cronenberg, "his films have a darker edge to them, but he is so light, generous and loving. Viggo said, 'It's different working with David,' and it is. They both have such a strong bond. But they are both generous and open, too."

Although Cronenberg claims he first hired Mortensen for Violence "because he was cheap," the star also was hot off his success in Rings and had built a loyal following. The actor, meanwhile, was fearful of being typecast by the trilogy that ended in 2003. "I wanted to remind people I didn't come from Middle Earth."

The result is a relationship that will likely continue for some time. The director's analysis? "It's inevitable."
Top of this page
Last edited: 21 April 2012 09:35:49