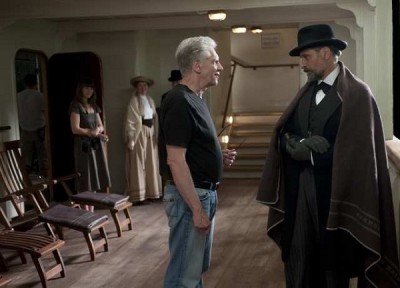 © Hanway/Lago.
Here's an example of what Carl Jung would call synchronicity.

Years ago, David Cronenberg was in unsuccessful negotiations to direct the original Total Recall (the one that would star Arnold Schwarzenegger).

In the last few years, the controversial Canadian auteur has suffered a spate of runaway actors. Christian Bale and Christoph Waltz both bailed as Sigmund Freud [sic] in his psychodramamatic triangle A Dangerous Method (Viggo Mortensen ultimately played Freud).

This summer, as Cronenberg prepared to unveil Method and begin filming Don DeLillo's Cosmopolis, Colin Farrell quit the latter movie at the last minute for a role in ... the remake of Total Recall.

"Jung would say there are no coincidences," says a bemused Cronenberg, who ultimately hired Twilight's Robert Pattinson to replace Farrell. "To make it even weirder, Total Recall had (Toronto) studios right across from where we did Cosmopolis."

For all that Jungian spookiness, Cronenberg is on Team Freud on the occasion of the TIFF release of A Dangerous Method, what he calls "an intellectual triangle" between Freud, Carl Jung (Michael Fassbender) and the psychiatric-patient-turned-analyst (Keira Knightley) who becomes Jung's lover and Freud's protégé.

Cronenberg hears the surprised cries of some fans over his latest work, a gentle, languidly moving piece, much of which takes place in bright sunshine on the gentle shores of Lake Zurich. But for Knightley getting the occasional spanking, and a few other moments of kink, you might think you were watching a Merchant-Ivory movie.

Cronenberg protests that, yes, A Dangerous Method is a Cronenberg movie.

"People analyze my movies a lot, so this is me analyzing my movie for them," he muses, "at least for people who say this doesn't seem like a Cronenberg movie. I say, it feels like me to me, so how can that be?

As it turns out, Cronenberg has had a lifelong interest in the intimately close relationship between the two ultimately opposing psychiatric icons.

What he didn't know about was the remarkable woman they had in common, a Russian Jew named Sabina Spielrein that is, until he read the play by Christopher Hampton that was eventually transformed into a screenplay.

"It's only in 1977 that her existence was spotlighted," Cronenberg says. "They discovered this cache of letters in the University of Geneva and they discovered what an influence she was on both Freud and Jung."

In fact, the project's been kicking around so long, it was once considered for Julia Roberts.

That it worked out now, in Cronenberg's estimation, is an example of "casting as a Dark Art.

"But the story has a happy ending because they had terrific chemistry and we also had great fun on the set, which is also a great indicator."

And then there's Mortensen, certainly the most physically imposing Sigmund Freud to ever insinuate itself on the public imagination.

"That's the beauty of acting," Cronenberg says. "Sure, we gave him a false nose, dark contact lenses and he gained 25 pounds and grew a beard. But still, he delivers a Freud I hadn't seen onscreen.