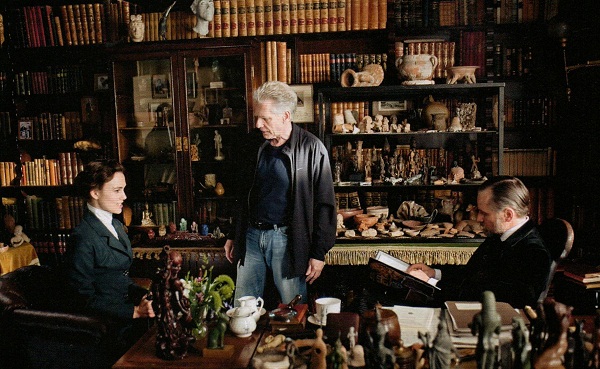 © Hanway/Lago.
Director David Cronenberg claims to have had ulterior motives when he chose the cast for A Dangerous Method, a period drama that examines the relationship between the founders of modern psychoanalysis Sigmund Freud and Carl Jung.

"I think my cast has great need of psychoanalysis, which is why I cast them actually, to introduce them gently to the idea that they needed help, a lot of help," Cronenberg joked during a packed news conference Friday before the world premiere of his latest film in competition at the Venice Film Festival.

Cronenberg motioned to Viggo Mortensen, who appears as Freud and Michael Fassbender, who plays Jung, Freud's protege. Also present was Keira Knightley, who portrays Sabina Spielrein, the psychiatric patient-turned-analyst who came between the two men.

"And you can see they are much better people. Before they were messes. When I found them, they were neurotics, hopeless," Cronenberg said to great laughter.

The movie focuses on Freud's relationship with Jung, from their mutual enthusiasm at finding kindred spirits in the development of new methods of treating psychiatric patients, then building up to their ultimate split over differences over Freud's adherence to theories about sex and Jung's interest in mysticism as a path to self-realization.

While their professional differences were couched in mostly clinical terms, a clear catalyst for their alienation was Knightley's Spielrein, an hysteric whose recovery under Jung's treatment validates Freud's sexual theories. The mentor-protege relationship goes awry when Jung - under the influence of a patient played by Vincent Cassel whose creed is to never repress anything - gives into Spielrein's sexual advances.

While the two psychiatrists seek to intellectualize emotion, neither Freud nor Jung come off as poster children for psychoanalysis. Freud alienates Jung when he stubbornly declines to relate his dreams to preserve his authority. And Jung disappoints his mentor when he enters into an affair with Spielrein, then lies about it.

"I think one thing you see in the movie is that their intellectual positions weren't so vastly different. It was really a question of pride. They behaved as childishly as the patients they were trying to help," Mortensen said.

Knightley's Spielrein perhaps makes a stronger case for their methods. She not only recovers from her hysteria, she successfully becomes a doctor, is willing to explore her own emotional depths, boldly confronting Jung's ambiguity about their relationship, and ultimately moves on with her life to marry a fellow Russian Jew.

In real life, Spielrein returned to her native Russia, where she became one of the most distinguished analysts of the new Soviet Union, according to the press notes. In 1941, she, by then widowed, and her two daughters were murdered by Nazi occupying forces.

The horror of the two World Wars that soon would ravage Europe were somehow foreshadowed in the film, which ends in 1913. At one point, Freud warns Spielrein not to put her trust in Aryans, that they would always be seen as Jews, and near the end when Jung recounts a dream he had of blood flooding over the Alps into Switzerland.

"You have to realize, at this era in Vienna, there were maybe five to eight mail deliveries every day," Cronenberg said. "It was like the Internet before the Internet. So if you wrote a letter in the morning, you expected by the afternoon to get a replay. So there were tons of letters among all these characters, and in these letters the quoted each other."

Knightley went deeper, reading biographies and Spielrein's diaries, as well as speaking to analysts, to better understand her character. Fassbender said his main resource was the script.

"It was written in such a way that I felt it was like a piece of music," Fassbender said. "Only through lots of repetition did I start to uncover the rhythms of the piece. "

He did make one concession to outside research.

"I got a great book on Jung that was 'Jung for children.' It was sort of an idiots' handbook. And I think I found pretty much everything I needed to find in that book," he said.

Mortensen still hasn't had enough. He appealed to the decedents of Jung to release even more of the Swiss psychiatrist's letters.

"I just want to know if the Jung family would be so decent as to release the remainder of the letters that he wrote to Miss Spielrein," he said. "Because they are very good reading. It's very entertaining material, and I'd like to see more of it."