Inside The Dressing Room

By - transcribed by Ollie and translated by Ollie, Rio and Zoe

Source: El Mundo
The following is a transcription of the El Mundo videoclip of Viggo talking in his dressing room about preparing to go on stage for Purgatorio. 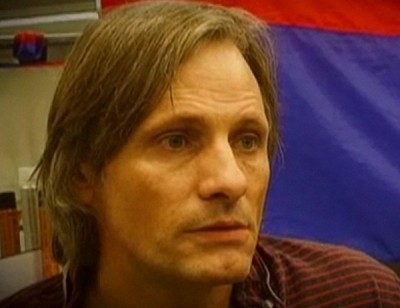 In the dressing room at the Naves del Español.
© El Mundo.
[...] It´s what I always do: I get dressed the same way, I play similar music, I sing some songs here to relax. I try to do everything here, as quick as I can, because what I like is to be backstage well in advance. Half an hour, forty minutes in advance, and there...although there are not many things on stage, I´m there for quite a while thinking, going over [the script].

When I arrive early like today, I have time. I listen to music, write some things. Every night there´s a blank piece of paper that...Well, I read the things I´ve got in this doctor´s folder.

Purgatorio, by Ariel Dorfman, is something rather existential. It´s not the purgatory where if you don´t expiate [your sins], don´t forgive or ask for forgiveness in a sincere way, you, let´s say, don´t go to heaven. You are there. It´s there where the thing has to be done...and done right; being honest when you ask and give forgiveness is the reward.

The whole process of the rehearsals that were so difficult up till now, with a very complicated script, has been a very interesting education for me. I´ve liked this very much and, up to a certain point, it heals, improves my perspective as an actor, as a person.

For me, every performance, like every take in film, is as if it were the first time. That's what's thrilling.

It's unusual that a theatrical performance would be sold out in the first week, I don't know, which is what happened. It's a luxury to have the theatre packed full every night and to know that it's going to be that way until we close. But even if there were [only] five people, I'd feel the same obligation. Not out of egoism. I do it for myself and I do it for Carme. That is, we both do it for ourselves. I think people feel that. We're always looking for a connection, which is also what the characters are doing.

There are actors who prepare - sometimes very well - what they do, technically, but there's no variation. They do it with precision, in film, too, right?, and they're not going to change. In other words, if you do something different, they're probably not going to change course during the performance. It's good that they can concentrate so well, but what you lose is that you can't play. When everything's said and done, it's a pretty sophisticated way of playing, with a script like this one, in a theatre like this one...

As an artist and as a person...I mean film and theatre artist, someone who likes to draw, paint, take photos; I have a publishing house, I publish books, write. I do many things that are all the same thing to me, right? The same desire to pay attention in a life that´s relatively short, compared to the years a mountain, a very old tree have...I don´t know. To make the most of what´s going on, trying to remember about what´s happening and weigh it. Filtering what I see, what I feel and expressing it, it´s the same thing.

I have Danish and American nationality. I have very strong ties with the country of my upbringing, Argentina, with many places. I'm not very fond of passports, borders or flags, but [laughing and pointing at the SL flag behind him] for San Lorenzo de Almagro, I do have unconditional love! They can almost do no wrong!

Out of superstition, that flag, or one like it, is everywhere, on a film shoot or wherever...

[Camera focusing on his dressing table]

I put the script here, although I already know the text. I always have the script backstage. I have this owl with the bracelet in San Lorenzo colors; I touch the two eyes of the owl every night before I go on. I have a photo of San Lorenzo's first championship team in 1923, Father Lorenzo Massa, the Silesian who founded San Lorenzo, I have chocolate. I'm always eating...

Mate. I drink some mates to calm myself. [Pointing] Here's the mate. Also, in the back, luckily there is a fairly dark alley and I can go out and sing and do my thing [laughing] and no one bothers me. So, when they call me, they say to me, "OK. We're going to let the public in now," I'm already in Purgatorio.
Top of this page
Last edited: 18 February 2012 09:40:25