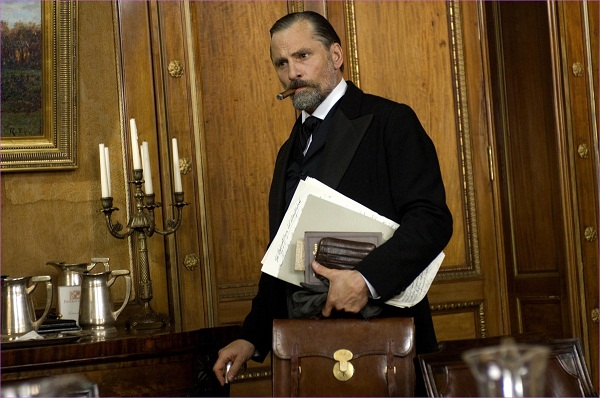 © Hanway/Lago.
Viggo Mortensen has played a wide variety of characters in his career, comfortable in seemingly any role - but Sigmund Freud?

Yes, in frequent-collaborator David Cronenberg's film A Dangerous Method (the two have also paired on A History of Violence and Eastern Promises). Mortensen plays the cigar-smoking psychoanalyst opposite Michael Fassbender's Carl Jung, as the two men work together and then split, divided over a patient (Keira Knightley). He spoke about his extensive research for the role and what he learned about Freud in the process.

How many cigars did you have to smoke in this movie?

I smoke a lot of cigars. Fortunately, they were good cigars. That was part of my research, finding out exactly what he smoked and finding the cigar that was closest to that. He smoked at least 20 a day, which is a lot. Each cigar, if you smoke the whole thing, is like smoking a couple of packs of cigarettes.

From descriptions of him and photographs, it's almost impossible to find a photograph of him, unless it's a childhood picture, where he doesn't have a cigar, whether it's with friends, family, indoors, outdoors - it's constant.

Freud is famous, but there aren't a lot of recordings of him for you to base your character on.

There is a BBC voice recording of him, but it's toward the end of his life, the late '30s, and his voice is quite feeble at that point. But there are many descriptions of the way he spoke, that he was incredibly eloquent. He's admired as much as a scientist as he is as a literary figure. There are even some people, when he was at the height of his powers, there were people that were trying to promote his being nominated for a Nobel Prize, which he never was, and there was some debate over whether it should be for science or literature, because he wrote so beautifully in German. He had a great appreciation of literature.

There have been plenty of portrayals - even parodies - for you to watch.

None of his portrayals have moved me or stayed with me, to be honest with you, to the most extreme, whether it be kind of a Mel Brooks approach or more serious ones. None of them really get to me. It wasn't that I didn't like them. It's just not something that I had in my head or had to get out of my head.

What I did have in my head was a preconceived idea of what he looked like and he was like as a person, which was that he was this frail, white-haired, formal, rigid kind of old man, gentleman, professorial type. ... Brilliant mind, and there was a formality to his dress that he maintained his whole life, in his dress, his writing style. But his ideas were revolutionary. They weren't staid by any means.

And as I say, what I learned about him was that he wasn't that way at all. Those preconceived ideas that he was kind of a fuddy-duddy and a very rigid person turned out not to be at all the case. He was a warm family person, a good friend, a very sociable person.

Aside from the man himself, did playing him change any feelings you had about his ideas?

You've worked with Cronenberg a lot. Why do you work well together?

Well, we get along. We enjoy what we do. We're not making movies - I don't think he is any more than I am - in order to win awards or to make money. Otherwise he probably would have accepted the studio offers he's had over the years, some of them, and so would I, most of which were not great stories, but hell, would have been a great paycheck. We like what we do. We enjoy talking about what we're working on and sharing ideas and building the storytelling aspect of it together. It's a lot of fun. Bottom line is, we have a similar sense of humor. That helps a lot. Nothing is sacred, is basically the bottom line.

To be relaxed as an actor is a key. Otherwise you're not going to be able to pay as much attention to what's going on in the room and what the other person is giving you, because you're tense and you're worried about how you're coming off. If you're relaxed and open, you're going to be able to take in and take on board for your own performance what the other person is doing, what the director is telling you.

David's an expert by now at creating a very necessary illusion that there's plenty of time and there's no pressure. Which is, of course, I say an illusion because it's not true. Moviemaking is all about pressure and the fact that you never have enough time to get it right. Somehow when you have someone who creates that atmosphere, you get it right.

I saw you described somewhere as his muse.

(Laughs.) I don't mind that. I don't know how he looks at it, but it's flattering.

You make eclectic choices in choosing roles. Why?

You want to learn new things. I think that's another thing that connects us. David, he follows his nose - "Well this is something I don't know about. I want to do that." Rather than, "I'm going to do a version of something I already did, and do it over and over again," and it becomes a dead-end street. He wants to challenge himself. He's got that eternal beginner kind of attitude.