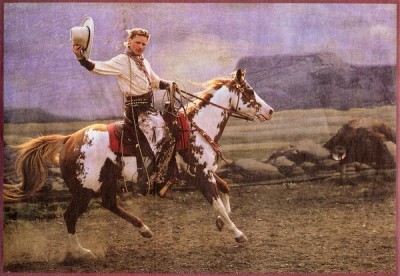 © Touchstone / Buena Vista Pictures.
Go to just about any movie and you'll see them — those almost-anonymous, hardworking actors whose name nobody remembers but who always play the hero's pal or the heroine's second-string boyfriend. Sometimes, they just might get a lead role in a small movie that almost nobody sees, going from obscurity to "you know, that guy who was in that movie" and then fading again.

They don't need your sympathy — they're making a living in their chosen career — but they're occupying a world far different from that of Tom Cruise or Denzel Washington. And, every now and then, after years in this cinema twilight, one of them, like Viggo Mortensen, vaults to the stars.

Mortensen entered the stratosphere through his work in Peter Jackson's The Lord of the Rings trilogy, the last film of which (The Return of the King) won a record-tying 11 Oscars last weekend. Now he's established as an above-the-title star, appearing next as Wild West cowboy Frank T. Hopkins in Hidalgo.

Mortensen came to Seattle last month to do publicity for "Hidalgo," which opens Friday. His laid-back interview demeanor, which is thoughtful, sincere and without a drop of A-list attitude, underscores his trajectory — he was a working actor long before he became a movie star.

Like his screen persona, he's at once intensely focused and relaxed. It's an intriguing combination, making even his less-interesting digressions compelling. (Mortensen does tend to ramble, but in a charmingly nonscripted way, with reckless disregard for the day's schedule.) And he seemed to see the interview as an encounter between two people, rather than an assembly line — asking, for example, what neighborhood I live in (he's visited Seattle often), how I like the city, how the interview process feels from my chair. Perhaps this was just further evidence of his acting skills, but in many years of doing interviews with actors, I can count on one hand the ones who've asked questions back.

Mortensen made his screen debut as an Amish farmer in Peter Weir's Witness in 1985 — and no, I don't remember his work in that movie, nor probably do you. Since then he's worked steadily, occasionally suffering the unknown actor's indignity of being cut out of films (like Woody Allen's The Purple Rose of Cairo), but gradually attracting notice for his vivid blue eyes and soft-voiced, all-the-time-in-the-world charm. He became known, in a who's-that-guy way, as a dashing and slightly dangerous onscreen suitor to the likes of Nicole Kidman (The Portrait of a Lady), Gwyneth Paltrow (A Perfect Murder), Sandra Bullock (28 Days), and Diane Lane (A Walk on the Moon).

All this changed with one phone call, several years ago. The Lord of the Rings: The Fellowship of the Ring had already begun shooting in New Zealand, with Stuart Townsend (now better known as Charlize Theron's boyfriend) in the role of reluctant king Aragorn. But after a few days, it became clear to director Jackson that Townsend, still in his 20s, was too young to play the complex, brooding character. A call went out to Mortensen — who, as luck would have it, was available.

"I basically got a phone call explaining to me what was going on," remembered Mortensen, sipping herbal tea from a metal straw in a handmade-looking cup with a horse on it ("a friend gave it to me"). "My son (Henry, now 15) overheard — he was sitting with me in the kitchen. They were offering me the opportunity to go to New Zealand to do this job, based on a book I'd heard of but never read. I had to think about it that day, basically. I called the director, spoke to him a bit, and just sort of desired to go." Henry, a Tolkien fan, assured his father that it was a good role.

Thus began the work on the movie trilogy that would change the actor's life. When The Fellowship of the Ring was released in December 2001, Mortensen's matinee-idol performance attracted attention — and suddenly who's-that-guy became That Guy, with plenty of new offers to field. He signed on for Hidalgo, a big-budget adventure about a dangerous horse race across Arabia, while still at work on the Lord of the Rings trilogy.

Mortensen remembers those days as hectic, to say the least. "We started shooting (Hidalgo) between the releases of Fellowship and Two Towers, and even as we were shooting, I was doing interviews in the evening on the phone, on some sand dune trying to get reception." During Hidalgo's production, Mortensen frequently took red-eye flights to do interviews or reshoots for Lord of the Rings, alternating between Africa (much of Hidalgo was shot in Morocco), New Zealand, England and the United States.

"It's been kind of a balancing act," he said, "going from Aragorn to Frank Hopkins, but it was worth that extra effort. Because you can't count on it, having experiences as important in your life as being part of Lord of the Rings. You don't expect, certainly not right away, to get the chance to be in another interesting story with a really good cast that you learn a lot from. I didn't expect to have that much good luck."

Now, after his press commitments for Hidalgo are done, Mortensen looks forward to some time off, and to reuniting with his new horse T.J., with whom he starred in Hidalgo. The two bonded during production, and Mortensen bought the horse when filming was completed. He grins when talking about the horse. "He's great. He's got a pretty big appetite for a very small horse. He's kind of relaxing and enjoying himself. I look forward to getting back and visiting with him and trying to get us both back in shape."

And he'll spend time looking over the many roles offered to him since Aragorn, reflecting his newfound clout. Where once he said yes to any acting work, his new fame has given him, among other things, the opportunity to be picky.

"In the end, the actor's main power is the power to say no," he said. "I have more things that I can say no to. It's not so much that you can say yes or control what's going to happen, because let's face it, if something works really well, something popular sells tickets, then chances are that you'll be offered things like that, doing the same thing more or less over and over again. That's not necessarily my idea of a good time."
Top of this page
Last edited: 23 October 2013 15:26:44
© The Seattle Times Company.