"If ETA asks for forgiveness, it must do so without conditions"

By Julio Bravo - translated by Ollie, Rio and Zoe 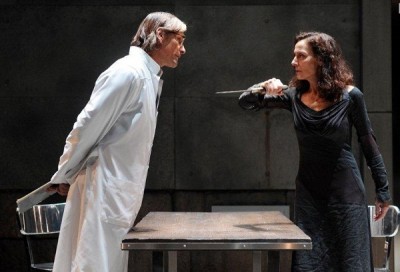 Rehearsals - October 2011
Image Andrés de Gabriel.
© Teatro Español.
Third time lucky. Next Friday, Viggo Mortensen will make his debut on the Spanish stage with the play Purgatorio by Ariel Dorfman (author of Death and the Maiden, among other titles). The production was already announced on December 2009 - with the New York actor along with his current partner, Ariadna Gil - but in the end it couldn´t be carried out. The project was taken up again in February 2010, this time with Emma Suarez as Mortensen's co-star, but the sickness of the actor's mother forced the production to be postponed again. "Ariel Dorfman said that it looked as if this play was cursed, because every time he planned to get it on its feet something would happen, and several openings have already been cancelled. This is the first Spanish-language version of the play."

Las Naves del Español, in the Matadero, will at last host the opening of Purgatorio. Carme Elías is his partner in the cast in a staging of the play directed by Josep María Mestres. Ariel Dorfman himself has travelled to Madrid to attend the opening of his play, and has been very much involved in the rehearsals. The actors agree that it's an extremely complicated text. "When I read it, I thought, `But what is this, how does it touch me?´ I read it a second and a third time and then it was like a flood of emotions inside me," says the actress amidst knowing laughter from her stage partner.

"The basis of Purgatorio," Mortensen explains, "is in the Greek tragedy. Carme´s character has a lot in common with Medea, but it´s a universal story; it could be any man or any woman. It´s not important to know Medea´s story..." "It is good for us as actors," interjects Carme Elías, "because we can nourish ourselves with Jason and Medea´s story. It suits us because myths always refer us to what went on before and what is going on now. But they actually are a man and a woman, like those we encounter on the street or who appear in the papers."

"Just as in the lives of our friends, or people who are in the public eye, in politics, the same as in the Greek tragedies, the gods or the legendary, ancient, mythical characters, the most interesting thing is their failings, the weaknesses. There's a lovely poem by Leonard Cohen in which he says, 'There's a crack in everything; that's how the light gets in.' And this play deals a lot with that, and as actors and characters, there's no other way; you have to be honest with the weaknesses, with the blame we all carry. This play asks questions without demanding that you think one way or another; it doesn't give you any answers. The most important question is whether it is possible to forgive unconditionally. Are there things so ugly, so horrible, so harmful that they cannot be forgiven? And if there is something the author is responding it's that forgiveness, if it's true forgiveness, cannot have any conditions, whatever it is one has done to someone or to society. If you forgive, you have to do it without asking for anything."

At this point, a reference to ETA and their recent announcement is inevitable. Viggo Mortensen admits his interest in the matter. "It's obvious that there are two sides, as in this play. Yes, they ask for forgiveness and you demand, 'They must ask for it without conditions.' But on the other hand, you can't be saying, 'They've asked for forgiveness, now they have to go to every house, knock on every door and ... no, no, no. You don't have to" - his Argentinian upbringing is showing [translators' note: a reference to his use of Argentine grammar] - "tell anyone how they must ask for forgiveness. They must do so without any conditions. Now yes, laws, criminal punishment... You can demand that someone pay the price for what they have done. But forgiveness is different. Should we forgive ETA members or not? And they, do they forgive those who might have done something to them or do they not? And you can say, 'What do you mean, 'the things that have been done to them'?!'' Dealing only with their asking for forgiveness, no, that doesn't work. And you can see that in this play."

"It would be interesting to see," Carme Elías adds, "how this whirlwind of violence we live in can be stopped: first, forgiving yourself [in order to] to then forgive the other, and maybe later that redemption he speaks of."

"But [whether] it's ETA or something personal at home with your wife, your husband, your father, your mother...," Viggo Mortensen speaks again, "you can't say, 'Good, I'll forgive you, we've wiped the slate clean, but I need just one thing more.' You've already fucked it up there, because vengeance, time and again, is a poison. The desire for vengeance, even though it might be very justified... 'They burned my house, they killed a friend, a bomb...' The thing with Gaddafi, as well. It isn't a good sign. Why did NATO bomb so much, and didn't in another place, in previous years? Why now? Who is first in line for oil now? And if there were no oil beneath Libya's sand, would NATO have bombed them, would the Spanish and other European and North American citizens have paid for the bombing with their taxes? I don't know. And who is going to benefit from this? If Gaddafi could have been allowed to speak, could he have been forgiven?"

And Carme Elías returns the conversation to the play again. "In short, all this refers us to a couple." But Mortensen continues brooding over the previous matter, "You can imprison, punish, fine a person or a terrorist organization, whatever... But you can also forgive them. People confuse [the two], 'If I forgive you, you won't pay for what you have done.' No, no, they're different things. You can put a monster in jail, but at the same time forgive him."

There´s no religious component in the forgiveness the play speaks of, say the actors. "It´s not the Coptic or Catholic purgatory; there are no indulgences, no money that will allow you to get away, to escape from sincerely asking forgiveness, unconditionally. There´s no other place, there´s no reward. The reward is doing it right, from your heart. And only you know whether you are doing it from your heart. And whether the other person, if they know you well, like in this play, will also know if it is from the heart."

Is it easier to forgive those you love or those you hate? "Sometimes we feel the people we love can hurt us more than those we don´t love," answers Mortensen. "I don´t know if it's easier, but...look, I didn't know the Nazis, but is it possible to forgive what Mengele did, the atrocities committed on both sides during the Civil War, what happened in Argentina? Anywhere? It's an eternal thing. The beauty in human beings is that they are unpredictable, but that's what's dangerous in them, too. We have a great capacity for understanding, and therefore to forgive. But we also have a great capacity for cruelty." "Darkness and light coexist within us," adds Carme Elías. And Mortensen adds, "If you know someone really well, you know better than anyone how to hurt them."