By Kerstin Lindemann - translated by Athelin 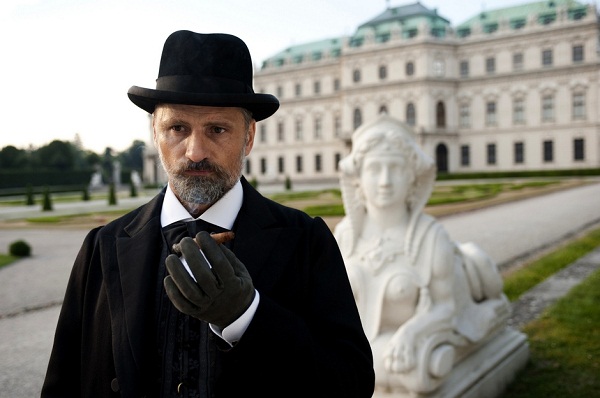 © Hanway/Lago.
For fans of complicated dialogue, David Cronenberg's costume drama A Dangerous Method (opening 10 November) is a must. Outwardly innocent, the Canadian director who is otherwise known for shocking effects, brings the complicated friendship between psychoanalyst Carl Jung (Michael Fassbender) and his mentor Sigmund Freud (Viggo Mortensen) to the screen. Of the austerity Viggo Mortensen radiates as Freud, nothing is to be seen during the interview. The 53-years-old arrives relaxed in flip-flops and with a fan bag of his favorite soccer team: San Lorenzo de Almagro from Buenos Aires.

A Dangerous Method is very different from A History of Violence or Eastern Promises, the movies you made with Cronenberg before...

You mean, there are no exploding heads?

On the contrary, there are many of them - only in a symbolic way. But when I watched the finished film for the first time, I felt unwell during the first 5 minutes. With David, everything is very personal and you ask yourself "Do I buy it or not?" And from one second to the next, you find yourself transported into his world. This movie may superficially be more traditional than the ones before, but just only superficially. When I see the film for a second time, I'd most probably like it very much from the first second on.

During this film, you cannot resist the impression that Freud was talking about sex all the time.

No, he wasn't. But he attracted huge attention with this topic, given the time period in which he talked about it. Today, people are talking very openly about their family and how it came into being, they think it to be normal. But during the late 19th century, when Freud grew up, it was not at all normal, especially for women. They hid from young girls even the fact what a man's body looked like. Men probably could talk about sex amongst themselves, but of course, there was no possibility for an open discussion.

The movie hints at that Freud's concentration on this topic might reflect his personal problems with it: that he was talking so much about sex because he had none.

That's a funny line from the script. But obviously Freud had a large family. So he must have had some kind of idea of how sex works.

How did you prepare for this part?

I went to his birth place Pribor in the Czech Republic, which formerly was part of the Austro-Hungarian Empire. Then, I spent some time in Vienna, followed his tracks through the lanes and of course visited his house, which nowadays is a museum. But I also rummaged through second-hand book shops, where I found many books which could have been part of Freud's library, too, and read them.

And Freud's own writings?

Of course I read some of those as well. The guy had an incredibly beautiful way of writing. That's why Freud was not only famous as a scientist in his time, but also as a man of letters throughout the German-speaking world. He was one of those gifted people who were able to do even long lectures without manuscript or preparatory notes. He used a very beautiful, comprehensible German and employed only few Latin or Greek words, which set him apart from other scientists.

Besides, he was a very fine lecturer, because he was able to transmit complex ideas and included his audience into his lecture to such an extent that in the end, they believed "this could have been my own idea as well!"

Do you have a favorite Sigmund Freud quote?

"Everywhere I go to, there has been a poet before me."

Sigmund Freud talks non-stop. You are rather famous for silent heroes. Were you at ease with this?

Of course, because you can interpret the relationship between Carl Jung and Sigmund Freud this way, too: The worse they get along with each other, the more they talk. And the more they talk, the less they express of what really bothers them.

The relationship between doctor and patient is - in film as in real life - complicated and dangerous.

It's always dangerous outwardly to express your innermost feelings and fears. But ideally, psychoanalysis is supposed to be a confession without punishment. No matter whether you aim at healing according to Jung's method or at an amelioration of the state of mind according to Freud: Both is done by the way of love. And the first step in love always is: listening. That goes between parents and child, between man and woman, between partners - in all kinds of relationships.