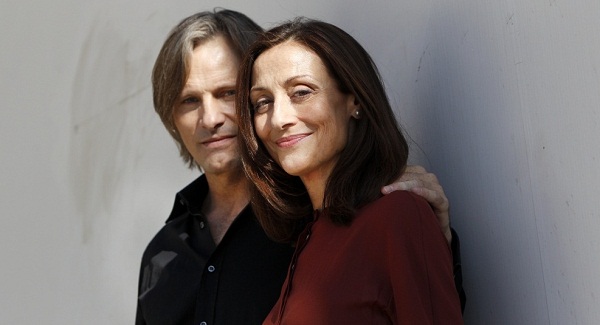 Image Álvaro García.
© El País.
Not even the handsome and famous are entirely free from stage fright. On Friday, actors Carme Elias and Viggo Mortensen opened the Madrid premiere of an Ariel Dorfman play called Purgatorio (or, Purgatory). And it may be that all the trouble that beset the production from the start added to the usual nerves of opening night. After all, one might say that destiny united them on the stage, against all odds.

"You have to be honest about feelings of guilt," says Mortensen, an actor from New York who was raised in Argentina and is widely known to film audiences for his role of Aragorn in the Lord of the Rings trilogy.

Mortensen was one of the first people to join this project by Dorfman, an Argentinean writer who grew up in Chile and lived in exile in New York. Later, the director Josep Maria Mestres joined the crew. The female role in the story, in which a man and women are confined in a room together (it remains unclear whether the setting is a psychiatric hospital or a penitentiary), was supposed to be the Spanish actress Ariadna Gil. When that fell through, Emma Suárez was signed on, but then Mortensen's mother fell seriously ill.

"For the first time in my life, I pulled out of a project that I was committed to," explained Mortensen this week. "But the time in between was good for everyone, and this Spanish version is very refined. In fact, Dorfman claims that this is a world premiere that will put an end to the alleged curse on a play that he has so often tried to stage, not just in Spain but elsewhere too, but always got canceled because of some unexpected circumstance."

Purgatorio marks Mortensen's return to the theater after 20 years, and it will be his first play in Spanish.

The last one to jump on board was Carme Elias, who was approached in April. "I had an attack of nerves," she says. "But I was always aware of the difficulty of the text; to me it was important to work with Viggo, to work again with Mestres, to have Dorfman with us, but ultimately the text had to convince me."

The purgatory that these actors are placed in is not the one that the Catholic faith refers to. "In this one, there is no indulgence, no money that can let you off the hook; over here, the meaning of purification is to live out a continuous process that has no beginning and no end," notes Mortensen.

The actor, who has taken on increasingly challenging characters since his Lord of the Rings success, believes that it is good for the play's author to be so involved. "Especially when he is so on top of the things that worked and those that didn't, and not afraid to make changes or improvements. He knows it is a very complicated text, and he wants to get the most out of it and for it to be well understood."

The play has whiffs of Sartre and the plot could well be reminiscent of a Greek tragedy, most notably Medea. "Ariel wants the audience to see that there are two people who are suffering, so the basis could be a Greek tragedy, but it is a universal story, it could be any man and any woman, and if one doesn't know it, it doesn't matter."

Elias adds that "it's good to know [about the Medea connection], as actors it is a good thing to feed on and it was very good for us, but myths are myths because they talk about now and about forever, about what we read in the newspapers. But Ariel's discourse is very deep, and it takes you to the reality of a modern couple."

Both actors take turns talking enthusiastically about the play, without stepping into each other's territory, as though they had rehearsed it. They always complement each other's words and never disagree with what the other says. "The most interesting part is that you clearly see how, both in our friends' lives and in the lives of people in the public spotlight, in politics, in legend and myth, mistakes and weaknesses always emerge," says Mortensen, and to illustrate it he brings up a fragment of a poem by Leonard Cohen: "There is a crack in everything. That's how the light gets in."

The actor says that this is what the play is all about: "You have to be honest about weakness and feelings of guilt. The good thing about any creative work, movie, story or poem, is that it asks you questions without asking you to think one way or another, and this play asks whether it is possible to forgive unconditionally, whether there are things that are so hurtful that they cannot be forgiven, and the answer I personally provide is that real forgiveness cannot set any conditions, be they what they may."

The subject makes the conversation veer inevitably to the end of ETA violence: "It is very interesting to look at it from this play's viewpoint; there are two sides, as in the text, and if they apologize, you cannot place conditions on how they must do so; it's another thing to demand that they pay the price for what they've done. What you see in this play is that it is useless unless both sides see how much they have hurt each other."

Elias adds: "The point is to see how we can stop the spiral of violence that we live in, and it's difficult to do that when only one side is aware; you have to learn to forgive yourself before being able to forgive others."

"That's the key here," adds Mortensen. "First you need to forgive yourself, then forgive others. Revenge over and over again is a kind of poison, even if saying so is quite justified."

Then both actors forget about the interview and start talking amongst themselves about Gaddafi, NATO, oil, why some places are bombed but not others, oil interests in certain parts of Africa, and who benefits from all this.

Purgatorio, starring Viggo Mortensen and Carme Elias. From November 4 to December 18 at the Matadero Madrid.