By Kurt Zechner - translated by Athelin 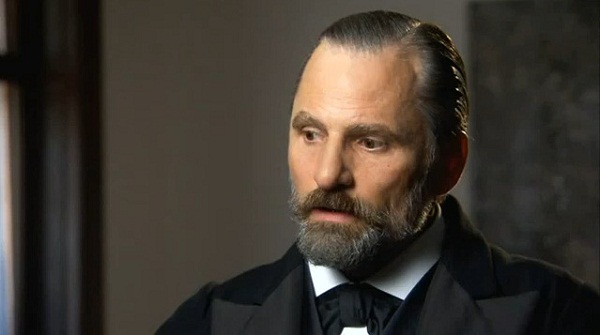 © Hanway/Lago.
In a last-minute decision, Viggo Mortensen accepted the part of Sigmund Freud in David Cronenberg's new movie A Dangerous Method as a replacement for Christoph Waltz - a really big stroke of luck for all persons involved. SKIP met Viggo to talk about trips to Vienna, the pride of a father and soccer games, after which one of the most astute and well-read movie stars sometimes has to cry like a baby.

SKIP: In A Dangerous Method there is an exceptional amount of dialogue for a David Cronenberg movie.

Viggo Mortensen: That's right, Freud and Jung are talking a lot, and the longer the duration of the movie, the more they talk. But the more they say, the more indirect they get. In many of my movies, a great part of communication takes place by gestures and facial expressions. In this movie, words are the gestures. It's fascinating how little you can say with many words.

SKIP: This is your third collaboration with David Cronenberg after A History of Violence and Eastern Promises...

Viggo Mortensen: I've been lucky: Christoph Waltz, who was originally cast as Freud, bailed out at the last moment, so David asked me, if by any chance I wanted to do it. Exactly like with Lord of the Rings, where I came on board at very short notice and it turned into something rather big (grins). David and I get along so well that I simply know I'm in good hands with him. So I believed him when he said I could pull off Freud. I wasn't so sure myself, as it is not a very likely part for me.

SKIP: Part of the shooting took place in Vienna - how did you like it there?

Viggo Mortensen: For me as a big Freud fan it was extremely interesting to walk along Berggasse, where he lived, or tread the staircase leading to his flat. In the first take in the movie when you see Freud, he is standing at the very base of the stairs by which over decades people ascended to Freud's practice. The very same stairs he himself walked up and down every day. Madness. I'd already visited Vienna a few times before we started shooting, just to take walks. Freud himself took walks for hours every day, in every kind of weather around Ringstraße. There, parts of the city still look like in his time, which I found very inspiring. By the way, I kept up taking walks after that, rose very early today and walked around Venice for a long time.

SKIP: Did you ever undergo psychoanalysis yourself?

Viggo Mortensen: Yes, I gave it a try years ago.

SKIP: And did it work?

Viggo Mortensen: Yes, it was quite comfortable to talk to somebody who did not judge at all what I said. Who was not at all involved, but only listened, which was absolutely liberating.

SKIP: You are a profound connoisseur of the writings of both Freud and Jung and occupied yourself in depth with their theories. Both worked on the psychology of children - did they form any influence on the way you brought up your son (Henry Blake, born 1988)?

Viggo Mortensen: If ever I learned something from Freud and Jung, it's the fact that you cannot form a human being, but only guide him. You can aid him in being aware of himself, but never change him basically. With Henry, it was important for me from the beginning to show him asmuch of the world as possible and let him take his own decisions. He always was a very bright boy, he reads a lot and watches
all kinds of films.

Viggo Mortensen: Sure but he's not quite as mad as I am (laughs). But he's soaked up a little bit and happens, quite accidentally, to be a San Lorenzo fan, too (Viggo Mortensen is an avid fan of the Argentine first-league club). Last year we had a wonderful mutual experience. Before Christmas, I picked him up at university in New York to visit my father. Suddenly I had this idea and asked him: "I've accumulated some air miles and we've got a few days left until Christmas Eve, so what do you think, should we take a quick flight to Buenos Aires? If we hurry, we can make the afternoon flight!" It was a close call, we took off in snow, left the plane at 38° degrees of heat in Buenos Aires and drove directly from the airport to the season's last match, which came down to the championship for San Lorenzo. The most important match of the whole year! But then San Lorenzo lost, and nobody left the stadium after the match, everyone stayed seated and cried. Me too, of course. It was highly emotional. And then Henry said to me: "You know, Dad, up to now, I was a follower of San Lorenzo. But now, after witnessing you here, I'm a true fan!" (laughs).