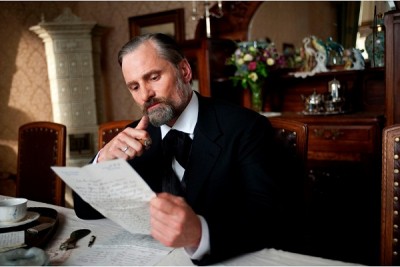 © Hanway/Lago.
"All friendships evolve one way or the other," Viggo Mortensen says. "Ours keeps getting better."

He's talking about his relationship with director David Cronenberg, now on its third film with A Dangerous Method. It's the story of a less salubrious friendship, between Sigmund Freud (Mortensen) and Carl Jung (Michael Fassbender), and the effect on them both of a patient, Sabrina Spielrein (Keira Knightley).

The Viggo-David collaboration (Mortensen-Cronenberg sounds too much like a law firm) is just one of several examples of TIFF films by directors who have found an actor worth coming back to.

"I think it was a relief for David to cast someone he knew," Mortensen says. "For me, it was comforting, especially playing a role where I had so much dialogue."

Mortensen even detected parallels in temperament between the father of modern psychoanalysis and Canada's progenitor of body horror movies. Not the ones you might expect, however. "The sense of humour, the intelligence, the warmth," Mortensen says. "It was helpful to have someone like David there; I had a model there all the time."

Says Cronenberg: "I had confidence that he could and would be able to deliver the Freud of my dreams, which was not everybody's Freud. Most people think of Freud as this frail, cancer-ridden 80-year-old. But this is a different Freud; this is a Freud at the age of 50, in the prime of his life, at the peak of his powers." It also helped that the U.S. actor had a Danish passport, since the Canada/Germany co-production could only hire Canadians and Europeans.

Cronenberg won't go as far to as call Mortensen his muse, however. "I'd be happy to do every movie with him, but if it's not a role that would really be great for him then we're not helping each other." (Cronenberg's next film, for instance, Cosmopolis, is Viggo-free.)

He's come to count on Mortensen's excessive research, however. "I know I'm going to get a phone call from him and he's in the Czech Republic standing in front of the birthplace of Freud. And then the next time I get an email he's in Hampstead in London at the Freud museum and he's sitting in Freud's real chair."

Mortensen arrived on the set with antiques books he'd purchased in Vienna, and having learned to write (in German!) with Freudian penmanship, a skill he uses on camera. "That takes real dedication," Cronenberg says. "If he gives me that it means I can do a shot like the one I did. When you've got a guy who does that it makes your life a lot easier."
Top of this page
Last edited: 29 October 2011 14:17:02
© Postmedia Network Inc.