Source: MSN Canada
The star of A Dangerous Method speaks highly of his work with the renowned Canadian director 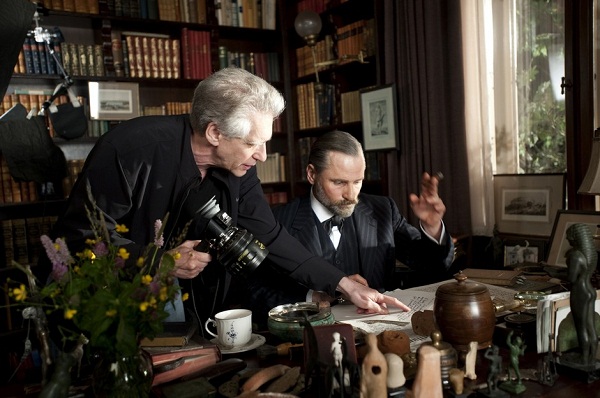 © Hanway/Lago.
"David's not Barnum and Bailey," says Viggo Mortensen, the frequent feature player in the films of Canada's beloved Mr. Cronenberg, sitting on the sunny and windy balcony of a downtown Toronto hotel. "A lot of directors are. A lot of actors, you know.

"George Clooney is someone who's very talented as a director and actor," Mortensen continues, in conversation with me and MSN's own home-video expert, Norman Wilner. "But he's as talented as a salesman. He really knows how to work that shit all autumn. And David just kind of does what he's supposed to do. He's understated."

Mortensen himself, at the Toronto International Film Festival to talk up his role as Sigmund Freud in Cronenberg's film A Dangerous Method, isn't so much a salesman as an intensely fascinated (and fascinating) collaborator. Now appearing in his third Cronenberg film - Eastern Promises and A History of Violence are Mortensen's previous two entries - the actor takes questions from both Norm and myself and runs with them, giving expansive and detailed answers and obviously enjoying what he does and who he works with.

It's a pretty sweet deal for two reporters. A Dangerous Method - which will get its big opening in December - centres on the arrival of Carl Jung (played by Shame lead Michael Fassbender) and his increasingly competitive relationship to Freud, and on Jung's venture into transference with patient Sabina Spielrein (Keira Knightley), who eventually comes into her own in the same field.

Mortensen marvels that a director as great and universally lauded as Cronenberg still hasn't been given the minting of major awards hardware. He wonders whether A Dangerous Method, where the sly intricacies of Cronenberg's humour are on full display, might change things.

"Like Freud," Mortensen says, "he's someone who is capable of making a brilliant aside with irony and humour, and a lot of times people don't even get it. And he doesn't care. He doesn't bother to go 'No, no - wait a minute! I was just making a joke.' That's stuff that maybe you realize when you go home: 'Wait a minute. That guy was just having me on.' Or, you're at his movie six months later and you go 'Shit, that's funny! That's really disturbing. That's great!' But it takes time."

Loyalty, though, is part of Mortensen's own brand. He never gives less than a full performance, and his dedication to his work and those around him is constant and palpable. And that includes his hockey team, Les Canadiens de Montréal.

Our 20-minute discussion breaks down, and while Norm and I get up to shake hands, Mortensen asks if there are any films we recommend. I mention that he should see Goon, Michael Dowse's excellent hockey enforcer comedy starring Sean William Scott, and I add that there is a subtle Montréal/Boston rivalry in the film - a point of interest, with Mortensen being Hab to the heart, and me a lifelong, black-and-gold-bleeding Bruins fan.

"You know," he says as we shake hands, "we would have gone all the way if we had beaten you. That was the best series of the playoffs."

That opening series won by the Bruins in Game 7 with an overtime stunner from Nathan Horton? No question. Norm and the photographer for the print outlet he works for - Toronto's weekly NOW - set up on the balcony to get a couple of shots of Mortensen, and I head back inside the hotel to go on my way. Until I hear a call back.

It's Mortensen, suddenly brandishing a huge Canadiens flag. I laugh, because all I've got on me is a Bruins keychain. But he insists I come out for photos with him, for which Norm's photographer kindly obliges. Now, I never pose for photos. I never ask to - and, at TIFF, it's wisely verboten to even think about doing so.

But I didn't ask. Mortensen did. Viggo Friggin' Mortensen, the guy who loves his Habs so much, he reportedly wore a Canadiens T-shirt under his wardrobe throughout the Lord of the Rings trilogy.

"Hold it up higher, so she gets it in the shot," he tells me as we stand shoulder-to-shoulder and I hold my keychain against his flag. Then, we shake hands again.

"Good luck next season," I respond. "It'll probably be a hell of a series again when these two meet next spring."

It's moments like these that make the Stanley Cup so worthwhile.