Source: Berlingske Tidende
Danish Viggo Mortensen has just premiered in the USA with the biggest role of his life in G.I. Jane - as the sadistic instructor in the Navy Seals who beats Demi Moore in a really evil and brutal scene. 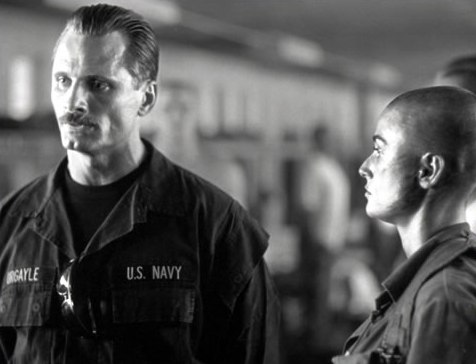 © Hollywood Pictures / Trap-Two-Zero.
It sounds a bit like a dream for the hussars.

Six months together with the lovely Demi Moore who we last saw in all her silicone in Striptease.

The reality is that it was hard-nosed work for Danish Mortensen who plays together with Moore in G.I. Jane.

Moore has one of the leading roles - Mortensen has the other.

Actually Demi and G.I. Jane is so un-sexual and brutal that you have to be very unusual to be turned on.

In return there are a lot of sex roles politics - as often happens when Ridley Scott (Alien and Thelma and Louise) directs.

The movie is - to make it short - about the navy officer Jordan O'Neil who is the first woman that is allowed to try her strengths against the Navy Seals.

Viggo Mortensen plays the almost sadistic instructor who does what he can to knock the strengths and self-confidence out of Demi.

When he doesn't succeed with mental torture he starts using more tangible learning methods. In the central scene of the movie - the point of no return - he beats her blue, purple and yellow. It's a very raw and very tough scene.

How did it feel to beat Demi Moore? "Well... I'm happy that scene went as well as it did," Mortensen says, when B.T. meets him in his hometown of the last more than ten years.

"That scene is very important in the movie. This is where it'll show if Demi has it in her. It's always important to me to learn a role as good as possible.

It was extremely well prepared. I think we went a little further in that scene than was originally planned. It's choreography so nobody gets hurt. But otherwise as an actor you don't have your feelings with you in a fight like that."

"By the way, I have great respect for Demi Moore. She is very serious. It is so easy to generalise and compare with Striptease. I hope the reviewers are going to be fair and judge her by her fabulous performance in the role as O'Neil."

Viggo Mortensen as a person is as far from his role in G.I. Jane as it's possible to get. The 38-year-old Dane has reached a stage where it's all about the leading roles when the scripts arrive at his house in Venice Beach. But privately he seems shy, modest and deep. His great interests are movies, poetry - and the nine-year-old son that he "shares" with the singer Exene Cervenka.

But Viggo Mortensen is ready to defend his role.

"In war it's not about sex, it's about being the first one to shoot or to push the button. Urgayle is fair, thoughtful and first of all a good teacher."

In spite of its success G.I. Jane is in many ways atypical for Hollywood. Partly it can in its dark and surreal way remind one of Ridley Scott's third movie, the cult-classic Blade Runner, and partly the director avoids the typical Hollywood-ending.

There are no sheets, no love, and the two enemies don't throw their arms round each other's neck in the end.

"Ridley has a status that means he can do what he wants. In that kind of movie where a man challenges a woman it always ends with sex, or she surrenders sexually. The good thing about this movie is that it doesn't end like that."

Something seems to show that the Americans like the movie - even though there's no love in the end. G.I. Jane is number one on the movie-lists today and the movie, director, Demi, and Viggo are getting tons of great reviews.

In LA Weekly the reviewer writes: "Viggo Mortensen is one of the reasons why they invented movies."
Top of this page
Last edited: 29 October 2011 09:31:55
© Berlingske Tidende.