By Viggo Mortensen - translated by Ollie, Rio and Silver

Source: CASLA
Viggo gives us "11 for El Bambi," a series of questions to Bambino Veira you cannot miss.

© Unknown.
I was able to ask Bambino Veira 11 questions, and we include them with his answers in this installment. We are going through a critical moment in this tournament. We are still on top, among the best, but we no longer can be careless - especially at home. Now, more than ever, we are thankful for Bambi´s positive outlook. He is right: with the work the players are doing under the command of Turco Asad we can still fight for the championship. Those who know well the legend of Bambino Veira are aware that it includes many stories and deeds. And those who don´t know the legend...tune in. To begin to appreciate it a bit (or to relive it), before reading the 11 answers from Bambi I recommend to you the following, compliments of YouTube. 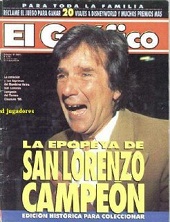 1. Do you like how this team has been taking shape for this tournament?

I think I do, Viggo. Things are being done very well. We are going from less to more and without a doubt we have a competitive lineup. So we have to keep on working with our usual seriousness so the San Lorenzo people can enjoy this moment.

2. With the absence of River in the tournament, rivalry between San Lorenzo and Boca is increasingly important. What did you think of the match between Boca and San Lorenzo in the Bombonera?

San Lorenzo played a very good match. At a certain moment they dominated Boca. At another moment San Lorenzo worked the match with great intelligence, and I think that scoring a point in Boca´s field is very productive at this moment when San Lorenzo is in its initial stages.

3. Between 1997 and 1998 you coached Boca. What do you feel watching the clásico between San Lorenzo and Boca Juniors - do you enjoy the match?

Yes, I obviously enjoy the match because it´s a clasico. Boca-River not being there, Boca-San Lorenzo is the traditional clásico this year. So we enjoyed it very much, also for the spice added by both Boca and San Lorenzo supporters to such a nice clásico, that I have played and coached for so long.

4. On November 5, 1967, playing in the Old Gasómetro, you'd already scored San Lorenzo's four goals against Boca in the first 34 minutes. There are those who say you made a fifth goal that shouldn't have been disallowed as off-side. Yours was quite a feat that day.

The fifth goal really was legitimate. It was one of those unforgettable afternoons where you really got into the game and everything turned out well. So because of that, I remember it so well, and so do the San Lorenzo supporters, obviously.

5. You played for Huracán between 1970 y 1971, and you were champion of almost everything as River Plate's coach in 1986. What do you feel now seeing those two teams in the B [division]?

It's an unexpected thing. Basically, nobody believed that River would be relegated and well... it's something that happens in the soccer world because Milan was also relegated, Juventus was relegated, teams that are tremendously significant. In this case, it was River and Huracán's turn. You know they're naturally first division teams.

6. I don't think another player could have played for el Globo [Huracán] and el Ciclón [San Lorenzo] and continued to be an idol to the supporters of both teams. In spite of having played well for both teams, of having coached for Boca and River, and after all the unexpected turns in your public life, the vast majority of people love you greatly. Do you feel that love? Does it surprise you?

Yes, yes, of course. What happens is that you go out walking and you feel it, you feel the affection of everybody very much. I'm basically an extremely positive person who doesn't criticize anyone. I think that in the long run that helps me greatly as a human being, and I think that people very much take that into account.

7. It seems to me that el Turco [Julio Asad] is doing things well, but as a San Lorenzo supporter and as someone who admires you and appreciates your achievements as a coach, I would have liked you to have taken the reins when Ramón Díaz stepped down after the last game we played against Tigre - at least for the rest of that tournament. Did that possibility cross your mind?

No, you have to have tremendous energy now to be a coach. Because of that, I think el Turco Asad was the right man, because of his great optimism. He's a coach with a lot of tactical experience who really manages the lineup very well. The players are content, and he's also very happy to be leading San Lorenzo de Almagro.

8. El Manco Casa was an important player for our club at the time of the Carasucias, and a brave man who accepted the bad luck that befell him in 1965 with courage and a good sense of humor. You were with him the night he was hit by the shot that destroyed his arm, weren´t you? That scene must have been terrible. Later he tried to go on playing but he seems he could not get back to the shape and physical balance that had made him such an impressive forward in the feint.

Yes, all that was terrible, Viggo. You are speaking a great truth: he was the bravest player I ever met. He was (he is!) an exceptional person, and you also add to that how humorous he was. You don´t know what Casa was like, Victorio Casa, when he would fall over his stump on the playing field! It would always end up as a raw wound and they would apply merthiolate to it and we all would tell ourselves, "Well, I think Casa won´t be playing again next Sunday." And yet he would come and kept on playing... He was one the bravest players I was lucky to meet. Notable player, notable player. He had that misfortune at the best moment of his career as a soccer player.

9. And Belgrano, Rafaela? Do you see them on top at the end of the tournament? With how close the matches are, it seems like we'll need more than luck, no? Boca is figuring it out right now. Not us. Does it seem to you that we'll go on throwing away how hard the players are trying, the great and well-prepared efforts of the team in the game - or is it a matter of chance?

Rafaela is a team which had already been playing like that in the National B [division] while the other teams are in their formation stages. I think that when the other teams are already assembled, in the case of Boca, the case of San Lorenzo, the case of Vélez, that they're already a bit more used to playing as a group. I think they're going to do very well. Belgrano is a very enthusiastic team that's coming on with a lot of motivation after defeating River. It's a tough, tough team. Our team gives its all; San Lorenzo is very ready to have a good tournament. What happened the other day against Belgrano is that they found themselves playing a team that parked all their players in our side of the pitch, that defended itself very well, and we didn't have situations where we could score, that's all. The matches aren't all the same, you know? No two matches are the same, and I think that in the next encounters our game is going to open up a little more, and that's where San Lorenzo's fielding abilities will start to work.

Of course...I think that the National Team wasn't very well organised at that moment. Not like afterwards when Flaco Menotti came and revolutionized everything with the organisation. I think that then everything was a little bit more lyrical, with great players, those superb soccer players from the sixties, but the organisation that Flaco Menotti brought later wasn't there.

11. You see a lot of movies, and a while ago you discussed current film on the radio. I know you like independent art films, as well as big budget North American movies when they're done well. What are the best ten movies you've seen this year? They can be Argentinian or foreign, new or old.

Many thanks for talking with us, Bambino!
A hug - "Guido"