By Mauro Donzelli - translated by Ollie and Rio 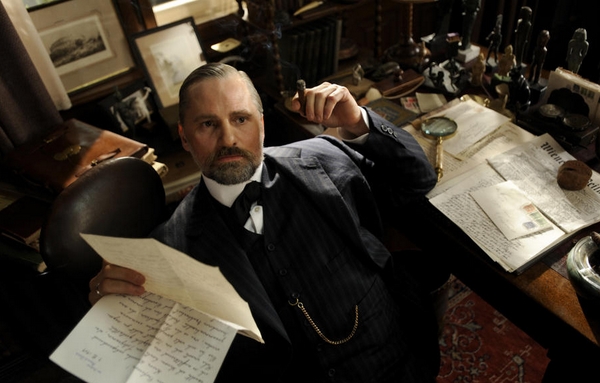 © Hanway/Lago.
At the last Venice Film Festival, where the film premiered in competition, we interviewed the actor, protagonist in David Cronenberg´s film.

Here's what he told us:

I believe that playing a character who really existed, a real person, is a big responsibility. How was interpreting an icon as Sigmund Freud, a pioneer of the 20th century?

It is always a challenge to play a historical character, especially one so well known to the public. Certainly you cannot please everyone, so you mustn´t worry too much, you just have to give your best. For me it was interesting because I had an image of Freud, as I believe most people have, as an old man, very thin, with white hair. This image, of course, belongs to the last years of his life, when he was ill with cancer. I play Freud at the age of 50, while still robust, healthy, a man of many appetites. I learned a lot about him, things that I did not know. When you play someone, you learn something you do not expect. I thought I knew his character and his ideas and what kind of person he must have been, but I discovered an ironic man, and considering how revolutionary his ideas were, a normal person.

As you said before, he was a revolutionary. He broke the rules, he changed society. Tell us about his relationship with Jung, because the film shows it in all its nuances, is very precise and thorough.

All the people who will watch the film and admire Jung will find things that are right for them and elements they will not accept, the same for the admirers of Freud and Spielrein. The thing that struck me most about this project, after much research, is how much hostility, how much vehemence there is between the different factions, how much vitriol has come out of these people, from their work, their relationships. In the end it is not a documentary, although it is very clever, well written. Many of their ideas are shown in an intelligent way, but it´s a fictional film, their ideas don´t matter. In fact, I discovered that their ideas were not so different, there was not much difference between them either intellectually or on an academic level, it was only a matter of ego. These people could have had any job. Both Jung and Freud, and also Sabina, were people with big egos, full of insecurities, who wanted to leave a mark on history and who fought against those differences of opinion they thought, almost in a childlike way, could threaten their reputation or their validity as thinkers, as people. It is a matter of jealousy, paranoia, lust, envy, all aspects which are part of being human. This is the most interesting thing for me in the script by Christopher Hampton.

A very interesting aspect is this duality between rationality and emotion, on one hand the rationality of public life, they are scientists, but on the other hand we have the emotional side, because it speaks about real life, people and real emotions, such as love. I think it's an interesting aspect of the film.

If we consider the historical context in which it´s set, a new element for David, directing a period film like this one, though in the context in which they lived, it was already amazing to talk about these things. People didn't. That's why they opened new ways, they made mistakes and sometimes they confused people with academic issues. Often their theories evolved due to personal feelings, in other words the feelings they experienced dictated their academic theories. If we read their work now, we can see that sometimes they forced a stand even when it is clear that there is not much difference between the two stands. I think this is more a matter of ego than academics.

What do you find interesting in the role of Sabina? That's something new; she goes from passion to being a psychiatrist. What is the effect of her personality on your character? Today we all know how important she was at a professional level.

More will be known soon, something for television has already been done, but a very interesting movie could be made just about her. She had a very interesting life before and after the events of this film. Eventually she became a highly respected doctor in the Soviet Union. Then both Hitler and Stalin criticized psychoanalysis, relegating psychoanalysts to the bourgeoisie or considering it a job for Jews. She continued to practice, especially with children, then was killed by the Nazis during the Second World War. Her life was very interesting; I'm happy if this film will raise interest in her. She was an interesting character. The relationship between Freud and Sabina was the kind he had with many students, as [he had] with Jung. He loved teaching, loved to share his ideas. Freud was very generous about it, he did not think of his ideas as his own property, he freely gave away his intellectual theories. His relationship with Sabina and then with Jung was like this at first but then Jung being the younger, with as much pride as Freud had, he felt treated with condescension by Freud. A sort of father/son relationship where eventually the child, to feel himself as a person, needs to distance himself from his father. I think the problems started at that time and that's what I find interesting, personal dynamics, not so much the intellectual conflict.
Top of this page
Last edited: 2 October 2011 12:07:49