By Trine Larsen - translated by Rebekka 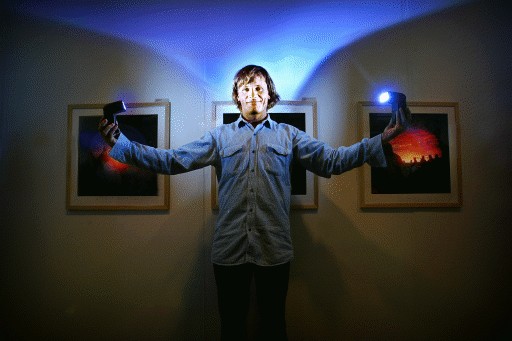 Image Andreas Szlavik.
© Polfoto.
As the beautiful hero Aragorn in The Lord of the Rings, Viggo Mortensen has already made his Danish name a household name in Hollywood.

So when this big movie star is suddenly exhibiting his own photos at Brandts KlÃ¦defabrik in Odense for the first time in Denmark, it's quite an event.

The sheer number of members of the press signals that this is big. But, his star status not withstanding, 44-year-old Viggo Mortensen is so very nice, easy-going and affable.

He enters the room, smiling somewhat shyly, in bare feet and immediately starts his own little provocation: he hangs a United Nations flag on the edge of the table.

'Because I am an optimist. There isn't much of a future unless we accept each other and live in peace and understanding. No matter what you call it, that's the idea behind this flag and I like it.'

Now you're opening your photo exhibit this Saturday here at Museet for Fotokunst in Brandts KlÃ¦defabrik in Odense. Why here?

'I couldn't say no, when I was asked. I was both surprised and very happy because I think it is an honour when so many well-established artists have exhibited here before me,' says Viggo Mortensen who despite the Danish-sounding name was born in Manhattan in New York to a Danish father and an American mother.

But no connections to Odense?

'No, my family here in Denmark lives in the middle of Zealand and even though I worked lots of places in the country when I was young, Odense has always been a town I just passed through. But we are changing that now,' says Viggo, who will be reading poems at a sold-out event tomorrow besides exhibiting his photos and, therefore, will stay in Denmark for a few days so his family can expect a summer visit.

It is a retrospective exhibit from 26 years of work. How have you picked the images?

'It's been very difficult because one would like to, but cannot, include everything. But I am very happy with the result and full of expectations. I hope that people will like it, but even if they don't that doesn't matter. It's okay,' says a smiling Viggo and adds. 'Please tell me what you think even if it's something bad!'

The photos definitely aren't. Actually the press photographers agree after having seen the exhibit that they are impressive.

Because there is action in the photos, because they capture the moment and its details and make small insignificant things important. Viggo's photos not only tell a story but also intrude and pull you closer to the image, according to the photographers.

'It's become like that, sort of a habit, a way to communicate. But I think that everybody who follows their innermost feelings and does what they really want to is driven by passion. Only a few people will take up f.x. photography with the sole goal of exhibiting.'

'People write poems as well without having them published in books. Often the joy and satisfaction you achieve from what you create is the greatest reward,' says Viggo who takes his pictures with a Hasselblad - one of the world's oldest and finest cameras.

Lots of people will probably assume that it's your status as a star that makes the interest in your works bloom?

'That's okay. I don't object to it if some people are here because of the movies I've been a part of. I don't try to kid myself because it's hardly possible to separate these things. But they're all my forms of expression and I paint, write and photograph mainly for my own sake,' says Viggo, who's called his exhibit Ephëmeris, which means log or diary.