Venice 68, Mortensen: "The secret of Freud? The cure through love"

By Christina Penco – translated by Ewa

Source: Best Movie
The actor of David Cronenberg's A Dangerous Method tells Best Movie the way in which he was influenced by the revolutionary theories of the unconscious. 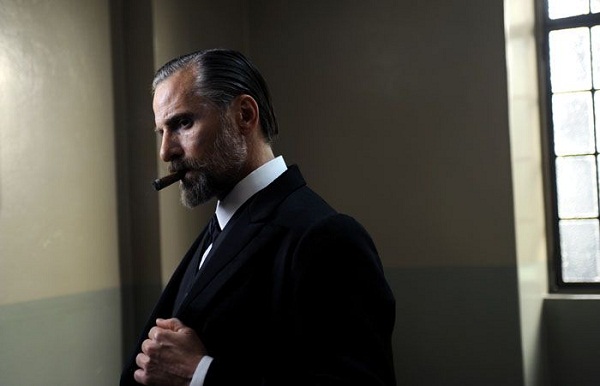 © Hanway/Lago.
Viggo Mortensen appears with the coat of arms of San Lorenzo de Almagro on his jacket, even the red blue knitted bag, in which the actor carries his personal belongings, is dedicated to the Argentine club, of which he is a passionate fan. The grey suit and the blue shirt highlight his placid and bright eyes. He is proud to be a part of the cast of A Dangerous Method directed by David Cronenberg, in which Aragorn of the Lord of the Rings interprets Sigmund Freud, the father of psychoanalysis.

BM: Referring to the title of the movie, do you follow a precise method in recitation?
Viggo Mortensen: For the part of Freud I have certainly used another approach than for previous roles. But in general I always like to ask the same simple question: What happened from the moment in which this person was born until his death or up to the present moment if he is still alive. Undoubtedly this is very interesting research and definitely very useful. In the case of Freud it was necessary to understand, beyond the psychoanalysis, the historical period in which things happened and the social and cultural context the doctor worked in, in that Vienna was by then the capital of the Austrian Hungarian Empire.

BM: Does an actor also experience a sort of transfer with his own personality, like in the relationship between therapist and patient?
Viggo Mortensen: After working on a film some colleagues complain: I suffered; I couldn't do anything than to take a backpack home, it ruined my marriage. To me nothing similar happens. It's not that I'm not attached to my work ... sometimes in the past when my son Henry looked at me while I was studying a part and when he got angry with me in certain moments I came back to myself realizing, for instance, that I was speaking with a strange accent; but I told him to not worry about it. In general learning a role implies a positive and incredibly useful transfer to me, it's a pretext to learn a lot of new things and to watch the world from another perspective. It was the same now with interpreting Freud.

BM: What do you think about Freud's work?
Viggo Mortensen: I believe Freud wanted to find a way, a method exactly, that allows people to confess without being punished, proposing therefore a cure through love. I think there is no greater form of love in a person's confrontations than listening. Whether it concerns a child, a lover or an enemy...Listening is the first level of love. If you are a good actor, you are a good listener; and this applies also to directors.

BM: It's the third time you've worked with Cronenberg, after A History of Violence and Eastern Promises. How has your relationship changed in this time?
Viggo Mortensen: Cronenberg is a great listener, very attentive to details. Working on a film with him means we are spending a lot of time together. Our relationship has improved over the years. Telling a story about psychoanalysis and about two psychoanalysts of the calibre of Freud and Jung meant there was a risk to make something boring; full of long dialogues and words, but it was the opposite. I enjoyed the carefully worked out details of it, I was very involved on an emotional level, as well as in the conversations I had with the other actors, especially with Fassbender.

BM: Have you already met psychoanalysis in your personal life or as an actor?
Viggo Mortensen: Sure, in reality I think it's present in the life of all of us. The way we read a book, how we relate to the family, how we watch a movie ...today everything has something to do with the new ideas introduced by Freud and Jung. Why do things happen? Why do I behave like that? Why am I so angry? These are questions that we accept nowadays as natural and spontaneous; but this wasn't the case in the period of the two doctors. The new science by Freud was born more or less in the same years as the cinema and both revolutionized the vision of the world, creating something new that didn't exist before. However, some twenty years ago, for a short term, I was in analysis myself. I found it an interesting and useful journey.

BM: Where are we going to see you next?
Viggo Mortensen: In On The Road (by Walter Salles, after a novel by Jack Kerouac) where I am interpreting Old Bull Lee. In the beginning I was not convinced of being able to attach myself to this personality, which is also what happened with the first proposition to take the part of Freud; but the directors assured me, telling me that I had the right approach. There's a link between Freud and Old Bull Lee: others look at them with admiration; they want to learn from them.