By Alex Vicente - translated by Ollie, Rio and Zoe 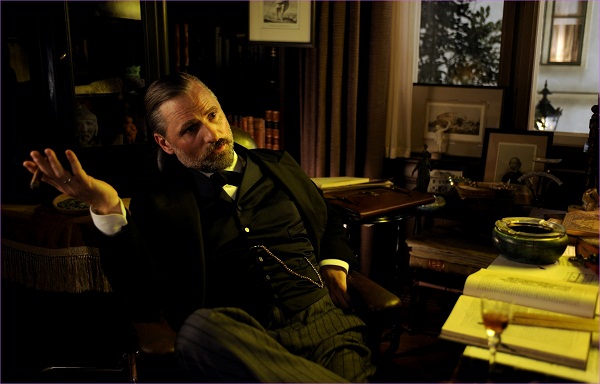 © Hanway/Lago.
First thing in the morning after the well-received screening of A Dangerous Method, the acclaimed biography of Freud and Jung that David Cronenberg has brought to Venice, Viggo Mortensen shows up with a San Lorenzo emblem on his lapel. He adores his team to the point that he once dedicated a tango to them. "In Spain, I prefer Real Madrid, although almost all my friends are for Barça. The one I can´t stand is Mourinho. You have my permission to publish that," says the actor. Mortensen, known as much or more for his soccer passion as for his exhaustive preparation before acting any role, now confronts the challenge of being believable in the skin of the father of psychoanalysis.

You said that you work "filling holes" in the biography of your characters. You research what happened between their birth and the first page of the script. Did it happen the same way with Freud?

Of course. The only difference with respect to the fictional characters was that this time I had more material at my disposal to give me an idea. I visited Pribor, his birthplace, which is now located in the Czech Republic, and spent a lot of time in Vienna walking around the places Freud must have frequented. I went to his house and scoured the bookshops, buying his books. It never worried me that it was a real character, maybe because I play him as a middle-aged man and not during his last years, which is where the image we all have in our mind of the bearded old man comes from. In the film, Freud is about 50 [the same age as the actor, who will be 53 next October].

What did you discover about your character that you didn´t know before?

I discovered that he was a great teacher, for instance. He was a very generous guy who made anyone listening to him believe that they could also have reached the same conclusions. I would say he was a great public relations person and very intelligent. He´s also a very contradictory character, revolutionary about certain things and very old-fashioned about the rest. Freud dressed in the same kind of clothes worn at the end of the 19th century. He never adapted himself to fashion. His home was also decorated in an old-fashioned way. Except for his study, maybe because he developed his theories there.

You say in the film, "In a hundred years, what I propose still won´t be understood." Is Freud still being misunderstood?

In spite of being practiced much more than in other times, there still are a lot of people who don´t understand his theories. Psychoanalysis was born as a confession without punishment, without negative consequences. Unlike Jung, Freud didn´t believe that it was a cure, but a way to become aware about our neurosis, to be able to moderate or correct behaviours that end up being harmful for us and those around us. It was a way for desire and self-control to make peace.

One of the other attractions of the project was collaborating with David Cronenberg again, but in a movie that's very different from what's usual in his films.

That's what everyone in the world tells me, that this time there's no blood or exploding heads. What they haven't understood is that they are exploding, but in a more symbolic way. As a filmmaker, Cronenberg makes you look at the world from his perspective, which is what you expect from any true auteur. In the hands of another director, it could have been a very boring film. In the three movies I've filmed with David (A History of Violence, Eastern Promises, and A Dangerous Method), something pretty strange happens to me. There are movies I like from the first scene, but with Cronenberg's, that never happens to me. During the first ten minutes, his movies always make me feel profoundly uncomfortable. It takes me a while to decide if I'm believing what he tells me, if I'm liking it or not. Until, suddenly, I'm caught up and I can't escape.

Can acting also be a form of therapy?

Any artistic discipline can be therapeutic. Everything depends on the way you approach your work. I'm not clear that mine is, although yes, it always interests me a lot to get to the origin of things to prepare my roles. On the other hand, film is especially psychoanalytical, perhaps because film and psychotherapy were born at the same time. If you look at the program of this festival, you'll understand that without Freud, not one of these films could be screened. Take a look at the plots and you'll see that the vast majority have something to do with his way of treating neurosis.

You paint, take photographs and write. Do you do it to detoxify yourself from film?

Don't you believe it. All those things are just as stressing as film. In addition, I have a tendency to always leave things for another day. Before I make the first mark on a canvas, it always ends up seeming much more urgent for me to have another cup of tea [laughter]. And then I only have 45 minutes left before some other appointment, so I've already made myself late to begin with...

You're known for supporting the left. Now that you live in Madrid, are you happy about what has happened with the indignados?

I completely support 15-M.* What the movement demands makes a lot of sense. The truth is that the PP's [Partido Popular's] drive is so strong right now that it's hard to believe they won't come into power. But the way Esperanza Aguirre and his government handled the situation seemed very clumsy to me. It would have been more intelligent to have been less restrictive. The only thing they achieved was for it to go on even longer. In any case, I didn't demonstrate. I would have liked to be there, but I happened to be in Argentina filming when everything happened.

[* Translators' note: The 15-M Movement, also called the Indignados (The Movement of the Outraged) is a citizen's movement formed on May 15, 2011 after a series of non-violent demonstrations in Spain with the intention of promoting a more participatory democracy, distanced from PSOE-PP bipartisanship [tr. note: current governing political parties] and the domination of banks and corporations, as well as a true separation of powers and other measures to improve the democratic system. (Translated from Wikipedia.es)]