By - transcribed and translated by Rio, Zoe and Ollie 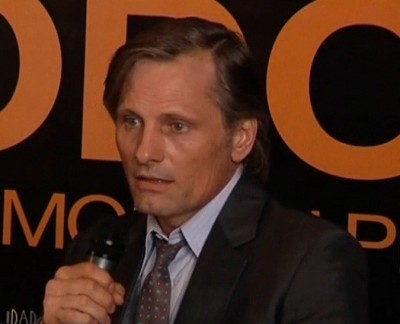 © La Metro Television.
The shoot that Cuidad de la Luz studios are taking in is the film Todos Tenemos un Plan. The film tells the story of Agustín, played by Viggo Mortensen, a man desperate to leave his frustrating life. After the death of his twin brother, Agustín plans to take on his identity, but finds himself involved in a dangerous criminal world. Today, the shoot was introduced on the sets of the Ciudad de la Luz film studios. Today's presentation was attended by Viggo Mortensen, the star of the film, the director Ana Piterbarg, the Spanish producers Gerardo Herrero and Mariela Besuvievski and Argentinian producer Vanessa Ragone, the actors Soledad Villamil and Javier Godino, and the director of Ciudad de la Luz, Elsa Martínez.

Elsa Martínez: What's important above all is the presence of all the actors and the film which I believe is the first platform from Fox that we're doing at Cuidad de la Luz. It's the first international project with Fox. I would like to emphasize that, and above all, I'm only going to introduce you to all the others but basically to emphasize that as director of Cuidad de la Luz, I feel very proud that these studios have the support of producers like Castafiore [and] that we have this visit from great artists and actors.

Ana Piterbarg explained how the experience of her first film has been.

Ana Piterbarg: Actually, the most difficult thing about a first work, at least with these characteristics in general, I think, is to be able to do it at all. No one knows you - or knows you, but, well ... you have to make up your mind to be self-motivated. I was lucky that Gerardo, Mariela and Vanessa were interested in the project for many years and we were assessing the way to do it, but for a first film, it's very costly, and so it is difficult to get people that are willing to put up the money. On a first film especially, if it's more costly, things start to happen. The truth is that getting the actors was not the most difficult thing. It was getting the leading roles and to me ... the strange thing about this situation is that I, truly, was thinking very hard about Viggo and I ran into him.

The truth is that arriving here at La Cuidad de la Luz at the end of long weeks on the river and in the cold was like coming into a sheltering house.

[...] excited and surprised to be living this, right? with this incredible cast, both those who are here like Daniel Fanego, Sofia Gala and all the rest of the Argentinian cast. I think the experience has been wonderful, so let's see how the film turns out.

Viggo commented on how exciting it has been to film for months in Argentina, remembering his childhood in that country, not to mention how difficult the filming turned out to be. As well, he commented on the script, his role and how it is to film at the studios of Ciudad de la Luz.

Viggo Mortensen: I've never been here. I have friends who have filmed here and they told me that it was an ideal site for filming and it's like the best that there is in the United States. I've filmed many times in studios in Los Angeles and New York and in other places and it is ... there is nothing better there than what you have here, so, very good!

The thing about this story, this script ... I gave her my address, she sent it to me, it surprised me. I liked the script very much. It was a strange story, but strange in a very positive way, because it's very original. It's a very original thriller. What I liked immediately and what I continue to like a lot are the contradictions, the dualities that it contains, not only between the two twin brothers that I play, but also the landscapes, the city and the river, and all the characters have certain contradictions.

[...] which is the same difficulty you confront with any role: not to force things. Playing twins, you are maybe going to believe that since their behaviour, their lives are different, you should force the thing, try to force the difference between the two of them... And the best thing was, with Ana´s help, to be more subtle.

The actor Javier Godino explained his role within the film.

Javier Godino: My character, the one I was asked to play, is very complicated. He is an islander, a guy who lives on a wild island, a hunter, a fisherman, with some values very different from those of the city and who has to use violence to get money. So, my part of the story has to do with violence and how to be able to be true to your nature without betraying your heart.

I think that it's about a little of that and how not to allow yourself to have bad bosses, not like Ana who is a great boss.

The actress Soledad Villamil commented on what her professional life has been like since the film El secreto de sus ojos.

Soledad Villamil: Receiving that award was a great joy. Everything that the film El Secreto entailed was marvellous and extraordinary that way, and of course it opened doors permanently. So yes, [I'm] very happy and of course also really wanting to continue expanding ... you know ... the scenarios.

Javier Godino tells us about Viggo Mortensen's initiative to create a family within the film crew.

Javier Godino: The first day, Viggo Mortensen arrived and hung up a San Lorenzo pennant. It started like that, little by little. First a pennant, then later, he felt, since we were in Tigre ... he brought a Tigre pennant. Then after that, he brought a Boca one. He started ... but in the end there's a ... this whole wall here is full of shirts from all the Argentinian teams, but also those of Real Madrid, of Barcelona, and of Uruguay too, of course. [laughter]

And that, I think that has been the only thing that managed to ... that's what I think made all of us come together. It's true that Viggo has created, like, a family.