At The Café Sperl

By Michael Omasta - translated by Sally

Source: der Freitag
David Cronenberg's new film Eine Dunkle Begierde (A Dark Desire) is celebrating its premiere at the Venice Film Festival these days. Filmed on location in Vienna. A day on the set. 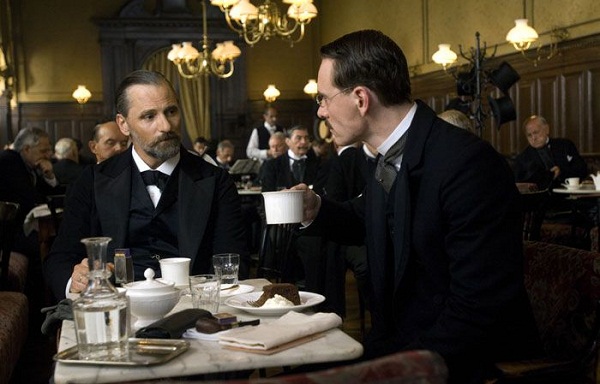 © Hanway/Lago.
It is almost seven o'clock in the morning and the Café Sperl in the sixth district of Vienna is already well frequented. Outside on the Gumpendorferstraße the café is illuminated by a battery of floodlights as in broad daylight. On the scene in its interior, the tables with heavy marble slabs and the window seats in red plush, lies a curtain of blinding velvety light.

However, no one drinks coffee here yet. To that, those present are too busy: production assistants and prop masters, electricians and assistant directors, the sound engineer and the entire camera crew from the lighting technician to the cinematographer. The vanguard, the first 30 of about 100 people in total. The narrow alley Girardigasse, right around the corner, is full of parked trucks on both sides, almost down to the picturesque Naschmarkt.

For three days, director David Cronenberg has come to Vienna to shoot on location for his new movie: at the Mölkerbastei, in the Berggasse, in the garden of Belvedere and now in an old Viennese coffeehouse. The Sperl. "After weeks in the studio in Cologne," says Peter Suschitzky, "this shooting in Vienna is a welcome change, and the more so, as we are two days ahead of schedule." Suschitzky, whose family derives from Vienna, is one of the most sought-after cinematographers worldwide and has filmed every Cronenberg film since Dead Ringers in 1988. Eine Dunkle Begierde is the ninth joint work. It's about the young psychiatrist Carl Gustav Jung, his former mentor Sigmund Freud and Jung's temporary patient and lover Sabina Spielrein. Less known than the affair is that Spielrein (born 1885, murdered by the Nazis in 1942) became the first woman to publish psychoanalytic topics and did pioneering studies in her specialty area of child analysis.

Christopher Hampton, a British playwright, used the web of relationships as a basis for his play The Talking Cure in 2003 and has edited it now for the film. In the lead roles play Michael Fassbender, Viggo Mortensen, Keira Knightley, Vincent Cassel - as measured by this star-studded cast, the British-Canadian-German-financed movie with its budget of circulated 15 million euros presents almost low-budget production.

In addition, properly speaking, Eine Dunkle Begierde is Cronenberg's first foray into period pic. For three days of shooting, the film crew lets Vienna resurrect in the fin de siècle. The real background to the key scene in the cafe, which is on the schedule today, is likely to be a visit of Jung from Zurich with Freud in Vienna in the spring in 1909.

In the morning the entire left half of the café is prepared for shooting, before the extras arrive at eight o'clock. Smoldering cigarette butts in the ashtrays, old-fashioned coffee mugs are available, various newspapers of yesteryear are laid out. Desserts are arranged on a sideboard, especially tempting: a tower of Schaumrollen (translators note: a very well-known sweet pastry in Austria.)

Two dozen distinguished gentlemen, who have to look like the action in the background, in full dress-up. Only their black top hats, that they carry with them, are in transparent plastic bags. Then they are admitted to their seats, puff cigars, read newspapers, play chess. Waiters bustling around a trial basis.

Less than half an hour later David Cronenberg is suddenly there. Beside him, Viggo Mortensen, aka Freud, who has entered the cafe, as if he were a regular guest here. The most difficult scene is first. Jung and Freud, both in their frock coats and upturned collar, seated at a table, discuss for one and a half, two minutes. Mortensen and co-star Fassbender act through the two-page scene of dialogue.

Freud has got a cup of black coffee in front of him, Jung works on a piece of Sachertorte with a fork. He had no idea, Freud warns his friend, what fierce resistance would meet their studies, not least it comes in handy for the enemies that the members of the psychoanalytic group in Vienna were all Jews. Jung says he does not understand what difference that makes. Freud briefly scrutinizes Jung, but he, innocent looking, especially now, with his distinctive beard of whipped cream. "That, my dear, is a truly Protestant remark."

Cronenberg watches the scene on a small monitor from a distance, on top of it: a plaster bust of Freud! Even though the first shot is fine, it is repeated for safety reasons. An assistant lights up a new cigar for Mortensen, the table is re-covered, a new piece of cake is served. Walter, the assistant director, gives commands by radio. Once again, the traffic is stopped on the spacious Gumpendorferstraße, sound recording: "start", background-action: "start", last: Action, please!

It is sweltering hot, indoors and outdoors. During a break, Viggo Mortensen enjoys a roll-your-own in front of the door. He seems deeply lost in thought, but not so deep that he wouldn't give a light to one member of the crew without having been asked. No one dares to speak to him. With only roughly outlined gestures and a cigarette instead of a cigar, he memorizes scene and text on the forecourt of the café, touches the lapel, his lapel - signifying Freud's professorial sovereignty.

After a short conversion follows the detail resolution of the long dialogue scene into shot and reverse shot. Cronenberg doesn't let his stars talk to the wall at such individual recordings, the other one is sitting at the table, even if he is not in the picture. This morning, Fassbender as Jung has got the more challenging part: He has to scoff a total of five or six half pieces of Sachertorte with whipped cream.

Scene of the afternoon is the right half of the café, while everyone and everything, which is not in use at the moment, is now moved to the other side. Mortensen comes around in T-shirt and sweatpants once more to again record a short dialogue. The stars have finished their job for today.

One of the scenes shows a young kitchen helper who fills a jug with water, turning left to go through a door into the narrow kitchen behind, serves coffee and puts it on the service hatch. Another scene shows a wide shot of the café, you can see, how two men enter and are received by the slightly portly waiter and are escorted to a table near the entrance, you see young men playing billiards, and older men puffing cigars or browsing newspapers. In both cases, the greatest difficulty is to produce coherent motion. Again and again the extras in the kitchen get in the way, the pool sharks and the waiter anyway. After a few more test runs the scenes are shot.

"David works very economically," says Peter Suschitzky, "he shoots scenes twice, maximum three times." And Christian Almesberger, his assistant from Salzburg, confirmed: "Cronenberg knows exactly in advance how and what he wants, but of course, if there's something wrong with the camera or the film, and one does not notice while filming, this might be a problem because little material is available to do the additional editing later."

In order that this system really works, David Cronenberg has gathered a number of co-conspirators for some years. This includes cinematographer Suschitzky and lead actor Mortensen, working for the third time for the director after A History of Violence (2005) and Eastern Promises (2007), composer Howard Shore, editor Ronald Sanders, casting agent Deirdre Bowen, designer James McAteer and Cronenberg's sister Denise, who is responsible for the costume design.

Jeremy Thomas, one of the largest independent producers of European cinema has already worked with Cronenberg concerning Naked Lunch and Crash in the nineties, and filmed in Vienna (Blackout - Anatomy of a Passion in 1980 with Art Garfunkel as a psychoanalyst) once before. He does not need the former usual cigar and gives the impression of being sympathetic and relaxed. This afternoon he is on set not for a long time, making sure that everything works as desired, and soon says good-bye. In search of a taxi a shoelace - very casual, very British - comes undone.

Anyway there is no hassle at all on the set throughout the day. Each of the hundred technicians, actors and supporting staff seems to know exactly what he or she has to do - and does it. Neither the director nor the cinematographer nor one of the stars raises their voice ever. Cronenberg constantly keeps his people happy, probably that's almost the most important thing for a shooting.

At about half past four the last scene is in the can. David Cronenberg looks satisfied and poses for a souvenir photo. Then in the background, a few sentences by him are recorded for the making of the film. "Freud is a synonym for Vienna. To capture this atmosphere of an era, one needs venues like the Cafe Sperl. We practically had to change nothing, it feels like being put back into the early 20th century."

The day has gone on long enough. For most of the people, it began in the dead of night, and to put everything back into its original state in the café, it needs at least another two hours. After all, the production assistant asks: "Anyone else want to have another piece of Schaumrolle?"
Top of this page
Last edited: 3 September 2011 14:36:28
© der Freitag Mediengesellschaft mbH & Co. KG.