By Martin Walder - translated by Sally

Source: NZZ
David Cronenberg tells in A Dangerous Method of the relationship between Sigmund Freud, C. G. Jung and his patient Sabina Spielrein. A visit at the filming in Vienna. 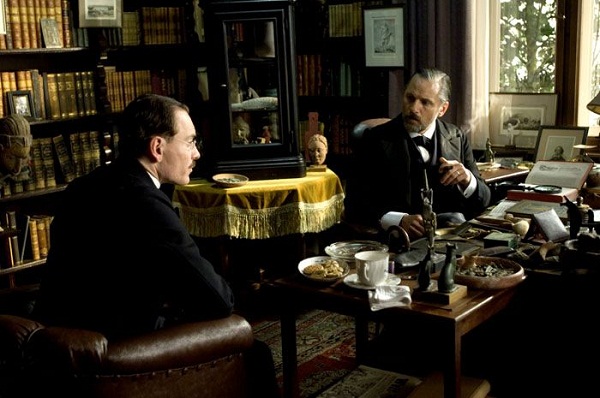 © Hanway/Lago.
"Freud is closer to me than Jung. For me as an atheist, his understanding of human nature is more appealing to me."

The Canadian horror specialist David Cronenberg convincingly filmed the drama about Sigmund Freud, Carl Jung and his patient Sabina Spielrein. A visit to the filming of A Dangerous Method in Vienna. The day will be glowing hot. The Vienna Belvedere Park with the ornamental shrubs is still almost deserted. Crows above the trees. A man in a frock coat and top hat is to be spotted in the distance. A jogger runs across the gravel alley, and a resolute young woman shouts "Lock it up!" into her walkie-talkie. On the horizon, someone sprints off and intercepts the jogger. Just don't lose concentration, thinks the man with the top hat.

The actor Viggo Mortensen looks as lonely as Professor Freud at this moment, whose outfit he wears in his new film. Sigmund Freud, the father of psychoanalysis, "the icon of the century regarding cultural and intellectual history," has cast a spell over the Canadian director David Cronenberg. And the star of his last two films, the New Yorker Mortensen embodies him. There is tension in the air if an actor must portray a historical figure. As if this is a matter of beard, top hat, the gloves or the paunch of 25 pounds which the wiry actor has developed for the role. Mortensen knows that. His background is a variation of "method acting". During filming breaks, he prefers not to get out of the role, he wants to stay close to Freud. Being in Freud's shoes. One should also take this literally.

"Shoes are very important for actors," reaffirms the costume designer Denise in a break during the filming. "We have had them especially produced in Italy." For the sister of the director who, like the editor and director of photography has belonged to his permanent team for years, her first period picture is an enormous challenge. Ten weeks of preparation. The costumes were made in London, "because the preserved originals were too worn out." Now the crew has been working since 2.30 in the early morning to dress the actors. "For the exras alone we need 20 to 30 minutes, the ladies are all in corset." The baby buggies that the extras mothers take for a walk in the background, the bicycles or wheelchairs that others push along, they are historic.

Scene of the crime Burghölzli 1904

Which story does this film tell? David Cronenberg, a master of the inscrutable and violent unfathomable, is shooting the film about the relationship drama between the married Carl Gustav Jung and his young Russian patient Sabina Spielrein in Zurich. A mortal sin in the young science of psychology. She is 18, he is 29. Sigmund Freud, the father figure plays his multi-faceted role, as friend, doctor, counselor and later as a reputation-conscious professional politician who, like Jung, won't shy away from sacrificing the queen.

We are in 1904. Jung is a doctor at the Burghölzli with Eugen Bleuler. He has taken the young Russian, who made a paradigmatic hysterical scene in Hotel Baur en Ville at the Paradeplatz, under his wing. She will be his key case and, after her studies, as future analyst also his colleague. The mixture is explosive. On the slim shoulders of Keira Knightley rests the load to embody the development of a teenager to an upcoming hopeful doctor. That Jung has an intimate relationship with his young patient, he doesn't like to admit to Freud for a long time. As the liaison becomes known, he drops Spielrein and she turns to Freud. "One can not say that Sabina Spielrein had a catalytical effect on the subsequent rift between the two men," sums up her biographer Sabine Richbächer who lives in Zurich in our conversation: "First the men tried to stabilize at her cost, wooing one another, and then later to make her take their side." Both harmed her.

Cronenberg's repeated trip again (after Naked Lunch) into the so-called "biopic" (biopic), and into the "period pic" amazes just at first glance; thematically he remains faithful to himself and to his works that are not stingy with horror. Mechanism and motor activity of the soul in our age of technology have fascinated him in viscal terms from year one, as they express themselves physically, telling of body stories, of body worlds and of body transformations. Think of The Fly, Crash and of course, Spider. "Freud is closer to me than Jung, without question," admits the director in an interview as well as: "For me as an atheist his understanding of human nature is more appealing to me. Jung's version of psychoanalysis is ultimately a religious endeavor."

The film is based on the the exciting, but rather didactic play The Talking Cure penned by the Englishman Christopher Hampton. "Not quite right," corrects Cronenberg: "It started with a script called Sabina for Julia Roberts, and when the project fell through, Hampton adapted the scenario for the theater. We fell back onto the much more cinematic screenplay."

But now the film is called A Dangerous Method, and this refers - in the words of Jung himself - to the title of a weighty tome by the American John Kerr, who has meticulously researched the history for the first time. "Why we have chosen this title - you will understand, when you see the movie" says Cronenberg. "It hits the radical, the subversive of the then new thinking more accurately."

Not only Sabina Spielrein has become dangerous to C. G. Jung, but indirectly a fourth person that came on the scene as well. It is the drug addict Otto Gross, being portrayed by Vincent Cassel in the film, who - before getting out over the walls of the mental hospital of Burghölzli - is treated by Jung and enables Jung to design the vision of an existence being freed of patriarchal and monogamous structures. The overwhelmed Jung, who knew that a "philistine" was inside himself up to now, now proposes a menage a trois to Spielrein and claims his wife would agree.

Otto Gross is the topic that Freud and Jung discuss during his second visit to Berggasse 19 in 1909 on this hot day of filming in Vienna's Belvedere Park. Slowly they walk down the gravel path. Cronenberg in a black t-shirt and worn out jeans is leaning relaxed in his director's chair. It is 5:30 am. He hasn't had any sleep, the 68-year-old apologizes. However the two main characters step in briefly. Mortensen says he also wants to show the soft and open-minded side of the Nestroy-lover Freud. "They both had big egos, but Freud always knew exactly what he wanted, unlike Jung," characterizes Michael Fassbender (Jane Eyre), who's as tall as Jung, his role.

The film is a German-Canadian co-production, with which the Swiss company Millbrook of Karl Spoerri is involved. Filming took place mainly at studios in Cologne, but also in Vienna, amongst others just at the Belvedere and the Berggasse 19 with the still original entrance. "There, in Freud's apartment, it should look dark and somewhat claustrophobic," says production designer James McAteer. For the recreated rooms of the smoker Freud it was to produce a nicotine haze. For the Jungs in Küsnacht, it should appear more open, brighter, lighter. Burghölzli Zurich, Küsnacht? Yes, we were there and scouted out in Switzerland. There was asphalt in Zurich in 1900 already, but that still doesn't guarantee a period pic."We even had to rebuild the entry of Jung's villa with the tower and to complete it with computer-based imaging technology,"says McAteer regretfully. "Even today Burghölzli could have been historicized only with great efforts by visual effects." So now in the film, Lake Constance smiles in the role of Lake Zurich, because there a suitable structural replacement could be found.

Does the film really take sides? David Cronenberg reacts calmly, "Probably the Freudians will be satisfied and the Jungians less. But as a filmmaker I wanted to bring the figures as close and as truthfully as possible to life. In any case we are dealing with a very strange menage à trois - because between Freud and Jung, it was love. Mutually! A Dangerous Method runs in competition at Venice, on Sept 26 at the Zurich Film Festival and from Nov 10 at the theatres.
Top of this page
Last edited: 2 September 2011 06:01:19
© NZZ/Pressdisplay.