Hidalgo: A Filmmaking Journey to the Middle East 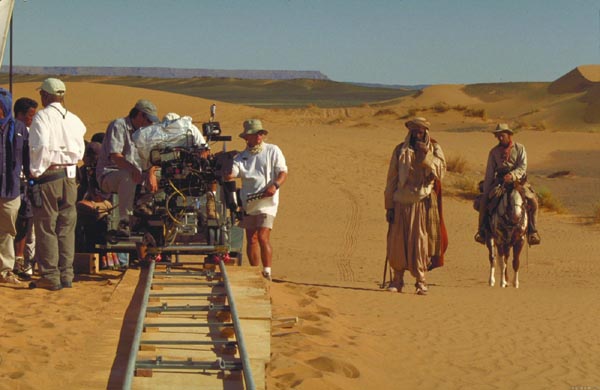 © Touchstone / Buena Vista Pictures.
'This kind of story, and this character - they set a good example.' There is a noticeable passion in the voice of actor Viggo Mortensen as he discusses his latest project Hidalgo. 'To have an American protagonist, who is more or less welcomed...He's not trying to educate people about the American way, and he's not conquering and pillaging.'


Even before its release, Hidalgo was dogged by charges of fostering an anti-Arab, Islamophobic message and accusations questioning its veracity.

However, when one hears Mortensen, as well as director Joe Johnston and writer John Fusco talk about the film, one thing becomes clear. Hidalgo was a labor of love from start to finish that led them on an amazing journey of discovery, not only of the world they were chronicling, but also ultimately of themselves.

For John Fusco, the journey to Hidalgo began 12 years ago while visiting the Pine Ridge Indian Reservation. It was there that an elder tribesman told him the story of a Mustang ridden by a half-breed cowboy. His curiosity as a screenwriter piqued, he began to research further and learned of long-distance rider Frank Hopkins, who, according to the traditions of the Lakota and the Blackfeet Tribe, traveled to Arabia where he competed in and won a race spanning thousands of miles.

For the writer, this provided a unique opportunity to expand the horizons of filmgoers. 'All Americans know about the beauty of the Native American Horse Culture, but few know about the equally beautiful Bedu horse culture and proud history.' The story of the American stranger coming to the Middle East and embarking on his own spiritual journey provided the perfect backdrop to serve this end. 'I not only wanted to depict the Middle Eastern characters fairly,' says Joe Johnston, 'I wanted the audience to be as fascinated as I was with the culture, the costumes, the way of life of these characters.'

From the outset, writer Fusco researched extensively to ensure his story had an authenticity that was heretofore unheard of in a major Hollywood production. 'I drew from a vast library of Arabian travel narratives from the 1800's such as the writings of Sir Richard Burton, Lady Blunt, Addison and so on. I also worked with an Iraqi consultant, enlisting him to cross-reference cultural details at every turn.'

'I wanted Hidalgo to be regarded almost as a time capsule of life in Saudi Arabia in 1890,' says Johnston. 'We studied details of everyday life including clothing, food, customs, even the designs of various types of Bedouin tents. There are over sixteen different cultures represented in the main tent camp and all of them are as accurate as we could make them. There are countless details that an audience will never see, but it was important for all of us involved that we never took the easy way out by genericising the visual components of the various cultures.'

'This is really very subversive coming out of Hollywood,' says Mortensen, pointing out how rare it is to see an active effort made to fairly portray Arab culture in mainstream films. 'We made a movie that's entertaining, it moves along, it's beautiful, it looks right, it's well cast - yet it contains so many more things in it, and it's done in a subtle way.' Filming in Morocco for the majority of the film's Ocean of Fire race scenes, the cast and crew had the opportunity to interact with the indigenous population on a daily basis. 'I gained a tremendous affection for the Muslim people,' the actor continues. 'When I was in Morocco, they didn't reject us out of hand as Americans because of what our government is up to. The people were open-minded.'

Johnston was offered a personal bodyguard of three soldiers from the Moroccan army, but quickly dismissed them. 'I can't imagine the impression it would give the citizens of Morocco to see an American walking down the street surrounded by an armed guard. I would be saying that I had something to fear. It would have had the effect of separating me from the population in a very negative way. In truth, I never felt any animosity from any Moroccan, or sensed that I was ever in any danger whatsoever.'

A drive into the desert to explore and get away provided Johnston with an encounter that would prove one of the most memorable and joyful experiences of his Moroccan visit. More than a hundred miles from his hotel, a young man on a bicycle approached him. Though neither spoke the others' language, they were still able to communicate with each other through nods and gestures. Johnston, noticing the rider had no canteen or water bottle, offered him one of his own unopened bottles before the two parted ways. 'I felt a deep respect, even a measure of envy for this man. It occurred to me that he had achieved a balance, a fitting level of cultural evolution that westerners cannot understand. I felt out of place, and somewhat weaker in comparison, with my internal combustion engine and the waiting comforts of my hotel room.'

While in Morocco, further authenticity was provided by the predominantly Arab cast, including legendary actor Omar Sharif as Sheikh Riyadh. 'The Sheikh is an example of violating stereotypes,' says Fusco. 'He is a man who loves and respects his daughter and provides a freedom for her despite the cultural mores.' Johnston continues, 'Omar gave a deep sense of legitimacy not only to his own character but to the story's placement in the Middle East. He also was an excellent sounding board on issues regarding realism and believability. Omar suggested a few changes in dialogue and nuances of the portrayals of some of the Middle Eastern characters.'

Addressing concerns that the film portrays its Arabian characters in a negative light, Johnston is forthright. 'Are all the Middle Eastern characters honest and upstanding? No, and neither are the American and British characters. Without conflict there is no drama, without drama there is no entertainment. It was more important to me to give depth to the characters of Sheikh Riyadh and his daughter Jazira, to Prince Bin al Reeh, Yusuf the goat herder, Sakr the Falcon man and Jaffa, Jazira's guardian. All of these characters are sympathetic and ultimately noble. Other than Frank Hopkins, I'd argue that the Sheikh is the most sympathetic character in the film.'

'I wasn't going to make an Islamophobic movie,' says Mortensen. 'If you know me, you know I'm not someone who has anything against Arabs or anyone else.'

© Touchstone / Buena Vista Pictures.
Johnston continues, 'I think that Frank Hopkins as portrayed by Viggo Mortensen undertakes his ordeal with humility and grace. He is a guest in a foreign country. He doesn't come with an attitude of superiority or even pride. He appreciates and accepts the viewpoints of his hosts. He is understanding and even forgiving at times. He accepts things at face value.'

'It doesn't always have to be the American going in and showing people how to do things,' says Mortensen. 'The stereotyping of the American cowboy has made it so that around the world those images have negative connotations.' He feels the characteristic that most defines true cowboys is curiosity. 'That's the first step toward learning something you didn't know.'

The actor immediately dismisses claims that the story is an outright fiction, feeling that such charges merely serve to undermine a film whose ultimate message is that 'people are people.' 'How much more enmity is necessary between East and West?' he asks. 'Especially over something that is well-intended?'

'The story of Frank Hopkins, Hidalgo, and the Arabian Race has been written about for 72 years in equestrian history,' says John Fusco. 'Perhaps there are aspects of legend to the story of this long-ago race, but it has been proven beyond a doubt that Frank Hopkins was an experienced and gifted long distance horseman, that his philosophy on natural horsemanship training was fifty years ahead of its time, and that he was one of the earliest proponents of saving the Mustang horse from slaughter.'

'It's not a documentary,' says Mortensen simply. 'It's a story.'

Reflecting on Hidalgo and its place in an increasingly tumultuous world, director Joe Johnston is thoughtful. 'I am not in agreement with the current administration's policies in the Middle East...or anywhere else on the planet, for that matter. I think understanding is the key, on both sides. The problem is that information and truth are withheld when they don't promote the goals of those in power. There is a lot of ignorance in this country about the people of the Middle East and probably vice versa. My own experience was one of friendship and caring, and a desire to work together.'

It is clear that for Viggo Mortensen, his experience in the Middle East while filming Hidalgo holds a special place in his heart. 'There's so much violence happening in the world right now, it's harder for people to reach out and understand...I personally think common ground exists between all of us all the time. It's there.' The actor pauses, 'You're not obligated to find out what you have in common with others, but it's worth it!'

This article was written for Q-News Magazine and is reproduced here by permission of the author, Zaki Hasan
Top of this page
Last edited: 12 September 2006 06:19:22