By - translated by Ollie, Rio, Sage and Zoe

Source: Terra.es
In his latest film Todos tenemos un plan that he is currently shooting in Alicante with Soledad Villamil (El secreto de sus ojos) and under Ana Piterbarg´s helm, the actor Viggo Mortensen plays two twin brothers whose portrayal has represented "a mental challenge" for their protagonist, according to what the actor himself has said. He has admitted to "being more scared about the sequences the two brothers have together" than "the hard shooting" experienced in the cold Argentinian winter. 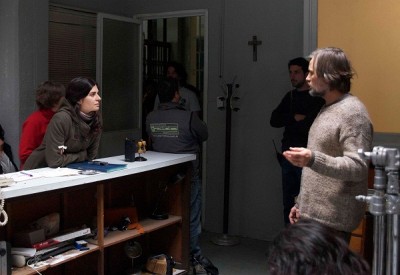 Image John Harris.
© Haddock Films.
In a press conference held this Tuesday in the studios of Ciudad de la Luz, just a few days from the end of the filming of Todos tenemos un plan, the artistic team of the film has demonstrated their satisfaction with taking part in this "complicated story" marked by the contradictions of its characters, according to its star.

"What I liked right away, and continue to like very much, are the contradictions, the duality it has, not just between the twin brothers I play but also the scenery, the city, and the river." In addition, he emphasized that in this story "In the end, Agustín comes to truth through lies, and comes to life through death."

Todos Tenemos Un Plan is the début in film direction by the scriptwriter and director Ana Piterbarg. In her first work, she depicts the story of Agustín (Mortensen), a man desperate to abandon what has gradually turned into a frustrating existence after living for years in Buenos Aires.

After the death of Pedro, his twin brother, Agustín prepares to begin a new life by assuming the identity of Pedro and coming back to the mysterious region of the Delta del Tigre, where both brothers spent their childhoods. However, shortly after his return Agustín becomes involuntarily involved in a dangerous criminal world of which his brother had formed a part.

The film is set in the unique landscape of the Delta del Tigre, a labyrinth of islands and rivers in which there are hidden spots that have always served as a refuge for criminals and the marginalized, and where Agustín must fight desperately to survive while trying to reinvent himself and leave the past behind.

On Tuesday, all of the artistic team of the film, completed by Javier Godino, Daniel Fanego and Sofía Gala, emphasized the harshness of the shooting in El Tigre, due to the cold winter and the extreme conditions. The film's protagonist, who enjoys the countryside and outdoor life, acknowledged that he found the physical challenge easier to bear than the mental work of playing the two brothers.

"The filming in Argentina was hard, because of the weather, but we were very lucky and miraculously finished on time. The encounter between the two brothers, which we're filming here, we knew that that was going to be complicated, because it was another challenge, a more technical challenge on the one hand, more mental, a puzzle, and I almost had more fear of that as an actor than of filming in the winter and on the river," the North American actor confessed.

Mortensen also is said to have loved the experience of filming in Argentina, where he resided during his childhood. "To be filming for months, creating a family together as we did on this shoot, is very different from spending a few days and I really loved it. For me, it's comparable to the filming of Alatriste or to the filming of The Lord of the Rings, but this happened more quickly, in part from being in the country where I was raised and in part because it was hard and we got through it together."

Javier Godino recalled some anecdotes experienced by the crew during the shooting in Argentina, a crew that Viggo Mortensen took care "to transform into a family" through his love for San Lorenzo de Almagro´s soccer team, he said.

"The first day, Viggo arrived and hung up a San Lorenzo pennant. That´s the way it started, little by little, and then he brought a pennant from Tigre and later the one from Boca. In the end, he filled the entire wall with jerseys from all the teams from Argentina, but also from Real Madrid, Barcelona and Uruguay. And this has been the only thing that succeeded in uniting everybody," said the young actor.

The actor's love of soccer was also what led him to take part in the film, since, as he recalls, years ago he met his director at the door of the San Lorenzo headquarters, on Avenida de La Plata, and she spoke to him about the project for the first time. "She told me about this story, this screenplay, and I was surprised. It's an odd story in a very positive way; it's a very original thriller," Mortensen said.

After having lived through the experience of filming in Argentina, the crew moved at the end of July to the warm lands of Alicante, where the recording of the interior scenes will be finished this Friday.

Mortensen has highlighted the professionalism of the Spanish film crew and assured [us] that the conditions at the Ciudad de la Luz studios are "like the best there is in the U.S." "There is nothing better there than what you have here," he pointed out during a meeting with the media made available by the director of the cinematic complex, Elsa Martínez.

The film, which premieres next year, is a co-production of Haddock Films, Tornasol Films, Terz Films and Castafiore Films, in association with Telefé and is produced by Gerardo Herrero, Mariela Besuievsky and Vanessa Ragone, the production team responsible for The Secret of Their Eyes, winner of the Oscar for Best Foreign Language Film.