David Cronenberg Tells Of The Bond Between Freud And Jung

By - translated by Ollie, Rio and Sage 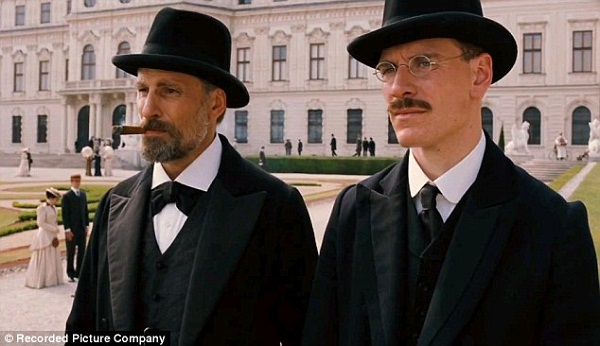 © Recorded Picture Company.
If the title didn't already exist it could be called "Clash of the Titans". Because the subject of A Dangerous Method, the new David Cronenberg film starring Viggo Mortensen, is the confrontation between Sigmund Freud and Carl Gustav Jung.

The third meeting of Canadian director Cronenberg with the actor Mortensen (they have already collaborated on A History of Violence and Eastern Promises), A Dangerous Method is an account of the initial friendship and the beginnings of the rivalry between Sigmund Freud (played by Mortensen) and his disciple Jung (Michael Fassbender), and, more extensively, the tensions that accompanied the beginnings and the early development of psychoanalysis, at approximately the time of World War One.

According to the film (which is an adaptation of a theatrical work by Christopher Hampton), one of the causes of the rivalry between Freud and Jung had to do with a patient, played by Keira Knightley, who becomes Jung's lover. History books add a few additional elements: the authoritarianism of Freud (who didn't allow dissent and considered anyone who differed with any of his conclusions a "traitor"), Jung's flirtations with the occult and "magical thinking" and his probable anti-Semitism, which at a certain level accentuated his estrangement from his Jewish teacher.

Initially, Freud came to consider Jung his natural successor. Nevertheless, the disciple never completely believed in the omnipresence of sexuality that permeated his master's theory (he might have considered him, like William James, "a man with an idée fixe"), and understood that the range of research needed to be expanded. In his autobiography, entitled Memories, Dreams, Reflections, Jung wrote, "Freud's greatest achievement consisted in taking neurotic patients seriously and entering into their peculiar individual psychology. He had the courage to let the case material speak for itself, and in this way was able to penetrate into the real psychology of his patients. He saw with the patient's eyes, so to speak, and so reached a deeper understanding of mental illness than had hitherto been possible. In this respect he was free of bias, courageous, and succeeded in overcoming a host of prejudices. Like an Old Testament prophet, he undertook to overthrow false gods, to rip the veils away from a mass of dishonesties and hypocrisies, mercilessly exposing the rottenness of the contemporary psyche. He did not falter in the face of the unpopularity such an enterprise entailed. The impetus which he gave to our civilisation sprang from his discovery of an avenue to the unconscious." [translators' note: translation of the Jung quote is by Richard and Clara Winston]

For the director Cronenberg, the meeting with Freud was probably only a matter of time. The exploration of sexuality, the world of dreams and the drive of the unconscious have been repeated themes in the work of the Canadian filmmaker. From his beginnings as a maker of efficient terror machinery in which a porn star could become a sort of deadly mutant (Rabid), killer parasites could suggest a phallic symbology (Shivers), or an uncontrolled burst of passion resulted in a scientist overlooking the controls in his lab and becoming a giant and monstrous insect (The Fly), to his incursions in William Burroughs´ literary universe (The Naked Lunch) where it´s possible to trace similar influences. In any case, Freud, Cronenberg and Mortensen initially are a suggestive triad. The film´s world-wide release is scheduled for November.