By Emilio Gancedo - translated by Ollie, Rio, Sage and Zoe 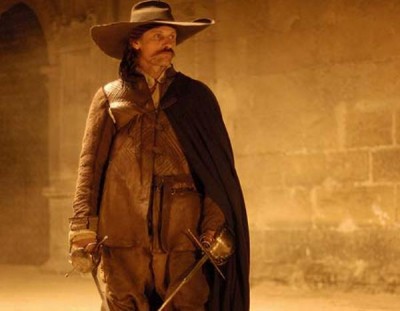 © Estudios Picasso / Origen Producciones.
The saga of Captain Alatriste, of which another installment will be published shortly, conceals numerous references to León, compiled by the historian Ricardo Chao.

It is perhaps the most popular saga from the Spanish author who has the greatest number of readers in this country: Captain Alatriste, the character created by Arturo Pérez-Reverte, will shortly live a new adventure whose title will be El puente de los asesinos [The Bridge of the Assassins] and that is ready to be published by Alfaguara. According to several digital sites specializing in the work of this prolific author, the writer and journalist from Cartagena, who visited the Magistral de Ajedrez Ciudad de León more than two weeks ago for documentation in view of a project for a novel and also to enjoy one of his great passions, could be presenting it next autumn.

Set in northern Italy, the plot of El puente de los asesinos begins when, after the failure of the Duke of Osuna's conspiracy, the Spanish again attempt to assassinate the Doge of Venice during Christmas Eve Mass, a dangerous deed which is entrusted to Diego Alatriste and his men. It will be the seventh installment in this saga of adventures set in seventeenth-century Spain, of which the most recent book to date was Corsarios de Levante, published five years ago. According to the author himself, "There are readers who have been clamoring for a new episode all this time".

It was during the writer´s recent stay in the city that he disclosed the reason for making Alatriste from León when he already had five installments of the series published. It all had to do with a fixation for this land by the actor Viggo Mortensen, who portrayed the Captain in the film adaptation by Agustín Diaz Yanes. "Look, Arturo," he said to him, "I have travelled a lot through Spain looking for a place to identify with my character, and I think I have found it at last in the mountains of León. Do you think Alatriste can be from León?" "Obviously I didn´t refuse and answered 'Of course,' besides, he is a rough, plain guy like those from your mountains, so I said 'Go ahead'," said the writer.

Enamored with this land. Everyone knows that on numerous occasions, Mortensen travelled to the Curueño valley and to many other places in the province, and the flag of this area became his inseparable companion not only during the shooting of the film, but also in public appearances, talks and tributes, even those celebrated in places as distant as Japan, Denmark, Argentina or the United States. A love for León that earned him the gold insignia of the province and the city in 2006.

What is not so well known is the number of references to León that exist throughout the saga. The writer and bibliophile Ricardo Chao has undertaken to compile them and puts them on his website, Corazón de León. The first of them is from the narrator himself, the young servant of Alatriste, Íñigo Balboa.

In the second novel of the saga, Limpieza de sangre [Purity of Blood], Íñigo falls into the hands of the Inquisition. The Dominican who conducts the interrogation glares at him on hearing his name. "Balboa," he says, "It's a Portuguese name." In those times, as Chao indicates, the Portuguese were viewed very badly for being suspected of conforming to Jewish customs, so what the Dominican insinuated was that Íñigo could be descended from Jews.

Soldier of Leónese origin: The text says, "It is true that the name came from the area bordering Portugal, where my grandfather had come from to enlist under the king's colors (...) "My father was not Portuguese," I protested. "He was a soldier of Leónese origin, like his father, who remained in Oñate on the way back from a campaign and married there... Soldier and cristiano viejo." [Translators' note: Roughly, Christian with no Jewish or Moorish blood, as opposed to cristiano nuevo, a converted Jew or Moor.]

So therefore, Íñigo Balboa (might the surname refer to the Berciano town of the same name?) is of Leónese origin on his father's side, although he was born in the aforementioned town in the province of Gipuzkoa. [Translator's note: A province of Spain in the Basque Country.] In that same book, there is also a reference on page 174 to San Marcos de León as the future prison of Francisco de Quevedo, who appears frequently as a secondary character.

In the third novel, El sol de Breda, [The Sun of Breda], another Leónese character reappears: the captain Carmelo Bragado, the immediate superior of Diego Alatriste (for whom Captain Alatriste was a nickname, and not his military rank). Specifically, on page 45 Íñigo Balboa tells us that, "He was a Leónese from the Bierzo, big, six feet tall." [Translator's note: Bierzo: a shire in the province of León, Spain.]

On page 41 of this volume, he brings forward, as shown by the historian and writer from the capital , some traits of Bragado's character: "Don Carmelo Bragado was one of those who hear "clink" and say "mine"; never passed by a penny, and he even kept deserters and the dead enlisted to keep their wages, when there were any, for himself. This, on the other hand, was common practice, and in defense of Bragado, we can say two things: He never refused to help soldiers who were in need, and in addition ,on two occasions he proposed, for his benefit, Diego Alatriste for Corporal. Íñigo adds that Captain Bragado had fought shoulder to shoulder with Alatriste and his father Lope Balboa in many battles.

Finally, in the last installment of the saga so far, Corsarios de Levante [Corsairs of the Levant], (published after Viggo Mortensen "claimed" the Leónese birth of don Diego), on page 130 Íñigo mentions a phrase spoken by Captain Alatriste before the landscape of "a bare and rocky island, typical of the Mediterranean, on whose crest can be divined the ancient columns of a pagan temple; a landscape very different from the Leónese mountains of his birth."
Top of this page
Last edited: 2 July 2011 13:24:24
© Diario de León.