Viggo Mortensen Will Shoot A Movie In Tigre 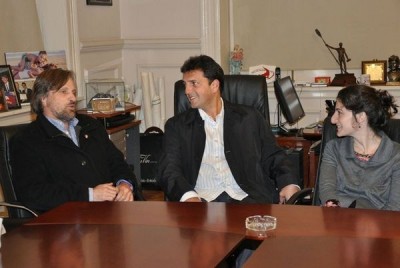 Meeting at Municipio de Tigre, 05.24.20011
Image Daniel Fariña.
© Municipio de Tigre.
The well-known actor will shoot his next film, Todos Tenemos Un Plan, along with Soledad Villamil. The filming begins in the next few days and will show the whole world the natural beauty of our district.

With an incredible cast, including Soledad Villamil, Sofía Gala, Daniel Fanego and Javier Godino, Viggo Mortensen will begin to film his next movie in Tigre.

The mayor, Sergio Massa, received the actor and Ana Piterbarg, the director of the film, at his office and talked with them about the characteristics of the district and the making of the film. In that regard, the City's Undersecretary of Culture, Daniel Fanego, emphasized that "this film, which is a co-production between Spain and Argentina, will allow everyone to know about the islands and our area, since they also will be using locations on the continent."

On her part, the film director, Ana Piterbarg, added : "Our film is going to be called Todos Tenemos Un Plan, and it will take place on an island in the Delta and in the city. Tigre is a special place, very beautiful and nostalgic; we are very happy to be here."

According to the synopsis, in Todos Tenemos Un Plan, Mortensen will portray two twin brothers (Agustín and Pedro). One of them, on the death of the other, establishes himself on the Delta, where he grew up, and takes the identity of his brother but finds himself involved in "a dangerous criminal world."

Mortensen, born in New York and raised in Argentina, will be filming in this country for the first time, and in doing so, will honor an "outstanding account" in his career. The actor is known for films including The Lord of the Rings, Alatriste, and Eastern Promises.

The film, which will premiere in 2012, will provide an opportunity to show the natural beauty of the area, which has once again been chosen for the production of films and series with great prestige and world-wide recognition.