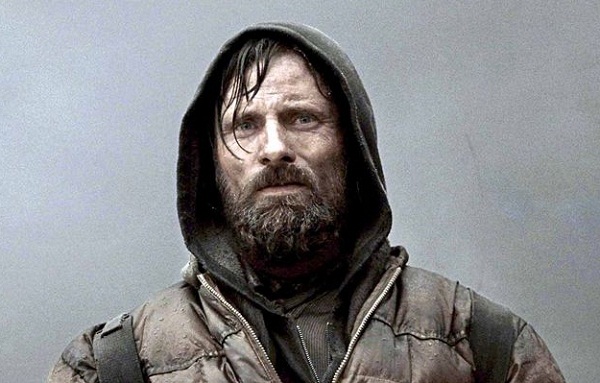 © 2929/Dimension Films.
Viggo Mortensen stars as 'Man' in director John Hillcoat's adaptation of Cormac McCarthy's unfilmable novel The Road; proving that it is filmable, if not exactly fun.

The Road is about as miserable a Hollywood film as you are likely to see. Watching it is like dying for two hours. It is pegged as a journey for survival, yet as the story offers no possibility of this, life becomes merely a reprieve. If such wretchedness does not put you off however, a rewarding passage awaits; to vicariously experience what you hope to god you will never have to face in real life.

Australian John Hillcoat has only four features under his belt including this one. Up until now The Proposition (2005) was regarded as his most notable achievement. An outback set revenge western shot as a ghost story, it was given the thumbs up by critics and public alike. Even if some people did not know what to make of this genre splicing, everyone could agree Hillcoat realised his vision with astonishing attention to detail.

The Road is just as precisely made; only instead of dusty plains we get deserted roads and decaying forests. It is a tough trip to weather as there is practically no respite. This is credit to Hillcoat. He does not back away from a post-apocalyptic world minus cyborgs in trench coats and Kevin Costner delivering the mail. There is nothing to see here but grey.

Costume designer Margot Wilson worked with Hillcoat on The Proposition, accurately reproducing late 19th century military and civilian attire and Aboriginal dress - indeed she won an Australian Film Institute award for her trouble. Although The Road cannot be classed as a period film as such, Wilson has created a similarly homogenous look, here comprising layered quilted jackets and baggy unflattering knitwear, bobble hats and carrier bags used for socks. Garments are worn for two reasons: to keep dry and keep warm.

Food is all anyone really cares about in The Road. Water can be found and boiled, yet food is so scarce that the desperate have been driven to cannibalism. Those who choose to abstain survive on tins of syrupy fruit and steamed chocolate, which might help explain why everyone has teeth as rotten as the scenery. Just a minor touch this, but another example of Hillcoat's dedication to getting it right. Toothpaste is an obvious luxury, and luxuries are seldom plentiful at the end of the world.

Although, as this straightforward set-up of travelling and scavenging is requisite of 'Man's' world, it does trap the narrative on a hamster wheel; a repeating cycle for 'Man' and 'Son' (Kodi Smit-McPhee), undertaking their pilgrimage on faith only assurance of a coastal Shangri-La. Head south. Try to find food. Try not to become food.

It does not take a genius to figure out The Road is a road movie. It is not a typical road movie, more like a chase movie in some respects, which becomes especially apparent during the final scene. Trawl movie might be a more apt description, though despite the journey being slow Hillcoat does not bloat the running time with drawn out vista pans; we get just quick flashes to feed our imagination - an abandoned truck in the middle of an overpass breathtaking in its meaning and simplicity.

So do not hold your breath for tidal waves or tornadoes. Following an unwarranted voiceover opening (strip it out and we lose nothing) the hint is that an environmental catastrophe has occurred. 'Has' being the optimum word. The story deals with aftershocks, literal and metaphorical. A forest of uprooting trees and the simple act of waking from a bad dream are used to exhilarating effect. Some of the jolts are blacker, brief but horrific, like the soon to be infamous basement full of battery farmed humans. You will be taken aback watching The Road. Infrequently perhaps, but you will be.

All of the characters in the film remain unnamed, except Robert Duvall's near blind geriatric, though he lies about his age (claims he is ninety) so who knows what else? His appearance is typically fleeting for a story that focuses solely on the two leads. Guy Pearce, The Wire's Michael Kenneth Williams, Duvall and Charlize Theron all walk in and out of the narrative with a lot to contribute but little to say or do. Every scene, character and person matters to the whole.

Viggo Mortensen is comfortably in the top ten most mesmerising actors of his generation. Both physically with his gaunt face and lithe body and in terms of the emotional commitment he brings to a role. His performance in The Road is up there with his best work. 'Man' even has shades of Mortensen's earlier role Lalin in Carlito's Way (1993), as someone whose hopelessness is palpable no matter how hard he tries to mask it.

Duvall, as usual, is perfect and should be in every other movie ever made. Theron bravely tackles an unsympathetic part much expanded from the book. And nobody cries like Kodi Smit-McPhee; his tears are heartbreaking.

Smit-McPhee's chemistry with Mortensen is moving, though not always convincing. Their dialogue would have benefited from trimming in those long nighttime exchanges, principally the 'fire inside' metaphor which despite best efforts; Mortensen in particular, fails to roll out of either actor's mouth with total assurance. The 'good guys' philosophy translates from the source material with far less sentimentality. Adhering to a moral code when there is no legal one left begs an interesting question: just how far would you go to survive?

Cormac McCarthy purists will sneer at the changes Hillcoat and screenwriter Joe Penhall have made. Charlize Theron's inflated backstory role and an absence of black ash on everything will doubtless be highest on their list of grievances. Yet Hillcoat's interpretation is as bleak as we could probably stand. He took it as far as he dared and created a beautiful suffering; crafting a film that somehow manages to be both unwatchable and unmissable at the same time.
Top of this page
Last edited: 5 June 2011 12:38:24