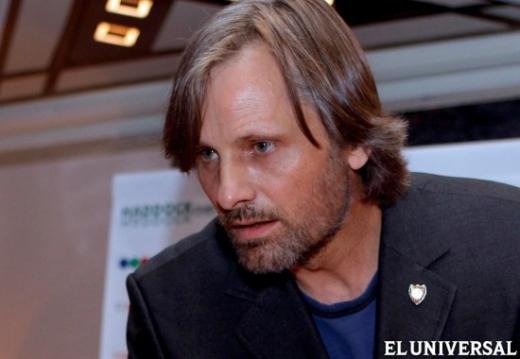 © El Universal.
The actor spoke out against the statements that the filmmaker gave to the press in Cannes and that led to his being considered "persona non grata" at the film event.

From Buenos Aires, Hollywood actor Viggo Mortensen added his voice to the controversy over the shocking statements about Nazism by Danish film director Lars Von Trier.

"I have a Danish passport very similar to Von Trier's, but I'm not sympathetic to either Hitler or his legacy of cruel intolerance," said the star of Eastern Promises.

On Wednesday, during the presentation of his latest film, Melancholia, at the Cannes International Film Festival, the Danish director declared that he "understood" Hitler. "I think he did some wrong things, but I think I understand the man. He's not what you would call a good guy," said Von Trier, setting off an international scandal. Even though he apologized later, the competition declared him "persona non grata" and the distributors of Melancholia in Israel and Argentina cancelled their contracts.

On Wednesday, from Buenos Aires, during the presentation of the filming of Todos tenemos un plan, the first movie he will film in Argentina, Mortensen said that the director of Dancing In The Dark and Dogville is a "unique artist," sent him a greeting and added "I hope he gets his act together."

The son of a Danish father and an American mother, the actor spent part of his childhood in Argentina, which he calls his "home". Todos Tenemos Un Plan, Ana Piterbarg´s first work, is a film noir that takes place for the most part in the delta of the Paraná River. In it, Mortensen will share the screen with the Argentinian Soledad Villamil, star of the Argentinian Oscar-winning film El Secreto De Sus Ojos and with Spanish actor Javier Godino, who also worked in the film by Juan José Campanella.

Asked about the massive protests of the 15-M Movement in Spain for a "real democracy," Mortensen, who filmed Agustín Díaz Yanes' Alatriste in the Iberian country, said that probably "it will happen the same way as the protests in the North of Africa; they will move from country to country."

"It's natural, with the explosion of the Internet; people find out about everything that is happening and say 'If this is a democracy, I want to join in'," he pointed out, and criticized the president of the Comunidad de Madrid, Esperanza Aguirre, of the Spanish Partido Popular (PP) who had asked that protests be suspended today, the day before the municipal and autonomous regions elections.

"It seems to me that what Aguirre did is a mistake. You cannot ban protests; people have already gone beyond that. Ask politely instead of saying that you can´t; that makes people angry. The position of Esperanza Aguirre and PP is to say to people 'you can´t,' " he added in his Argentinian accent.