By Ana Piterbarg - translated by Ollie, Rio and Zoe 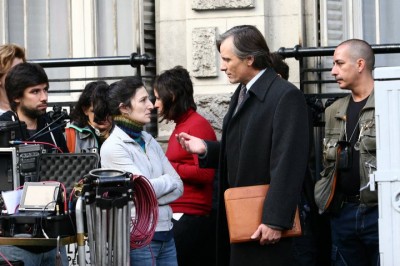 Images from the Set of TTUP.
© Haddock Films.
The film begins towards the end of autumn, a time when el Tigre starts losing its chromatic range. Only those who live there permanently and some occasional week-end visitors remain. Cane harvest and wicker production decline; what´s left is fishing, survival and waiting for the passing of winter. It´s the time of the year when the dogs seem to take over the place, and their barking heralds the engines of the motor boats.

To penetrate and get established on the island suggests a kind of inner journey, through one´s own delta. The sound, the labyrinth of streams, the unpredictable climate, the darkness of the night... this environment contributes to a certain self-absorption, sometimes soporific and at other moments leading to transcendental discoveries.

The river, that great all-encompassing expanse, in constant motion, is always present. Even when it cannot be seen, it makes its presence felt through its sound.

And man, and his body, are no more than another inhabitant in the midst of nature; the humidity, unceasing and unforgiving, permeates everything.

The characters of this story find themselves in constant conflict with the environment and with themselves. Each one's truth is revealed to the viewer gradually. Because of this, they often interact through irony or presumed distance, as if they were constantly keeping up an internal dialog to which they make us participants by means of suspense or a certain strange humor.

I´m interested in working the counterpoint, the contradiction, the clash between beauty and horror, reason and instinct, nature and civilization and allowing the atmosphere of nightmare in the story to appear simultaneously as attractive and welcoming, at times beautiful, almost harmonic, but as if it were constantly playing in a half-tone.

From the photography and the art, we'll seek to generate a world of its own, that though it is based on a real location, will allow us, through contrast and a certain subtle styling, to separate ourselves from the documentary approach and create a fictional space where the story takes place.

The camera will be placed in an almost classic way, allowing the place and the characters to be the ones telling us this story.

Sometimes we will move in gradually with certain soft-focus reference shots, creating the sensation of someone spying or being spied on, or signalling a certain oppressive air that hovers over the story.

On the island, relationships are usually mediated by the distance that the river imposes, and likewise, this distance can be observed between people, a certain tacit agreement of respect for the life of the other, as if it were permissible to see, but not to intervene, a kind of guarantee granted to anyone who chooses to live in this place.

At times, it will be the close-ups that will allow us to show what turns out to be terrible, almost unreal, as if in the wide-angle shots everything seems naturally harmonious, and suddenly, when the camera moves in, turns out to be terrifying: an apiary gone mad, the growl of a dog, the eyes and pressed-together lips of a kidnapped person, a deep wound, a machete cutting weeds, blood and the river mingling... seeking to capture what the movement of the water or the blowing of the wind does not always allow us to appreciate.

Although many situations take place within the plot, the rhythm of the film will be consonant with the internal rhythm of the main character. A rhythm that contributes to the mystery that we come across, to the silences that make the questions possible.

This tense calm will be broken by the action scenes, that in a precise, intense way, break into the story with explicit violence.

The frailty of these human beings, the physical and psychological pain, the marks inflicted by these confrontations, are all part of this story. They are wounds that open older wounds, and which give an account of an escalation that turns out to be unstoppable until the end.