The beginning of filming for Todos Tenemos Un Plan, with Viggo Mortensen and Soledad Villamil, is announced.

By Ezequiel Obregon - translated by Ollie, Rio and Zoe

Source: Escribiendo Cine
In a centrally located hotel, the producers, director, and part of the cast of the film (Sofía Gala Castiglione and Daniel Fanego) spoke with the press. Liliana Mazure, the president of the INCAA, was also present. 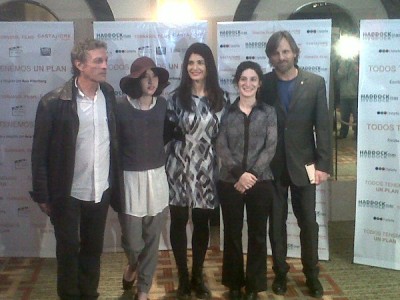 "Todos tenemos un plan" Press Conference - ….
© Escribiendo Cine.
"Making a first film is very difficult. Fortunately, and also unfortunately, I had thought up a very complicated story, and because of that it took me a lot of time to persuade the producers. I had the good fortune of finding Viggo; I'd been thinking of him for a long time. You could say, 'Dreams are only dreams,' but the truth is, no. I met him one day, very much by chance, and I said I had a script for him to read, because I was interested in making the film with him. And one day, he told me yes. From that point on, all my problems, which had been infinite, became finite. That's how this dream went on, because if I'd convinced Viggo, everything after that seems easier," said the first-timer Ana Piterbarg. With the addition of an international star, everything seemed simpler. But the task remained of assembling the structure that would make filming possible in the middle of the delta del Tigre, with a cost of - according to the producer Vanesa Ragone - nearly three and a half million dollars.

EscribiendoCine asked the director about the choice of place for the development of this thriller: "I began with this story many years ago. When I started writing, I thought about a place that would have rivers. I went back to el Tigre and I did some research for writing. The story was just beginning. And because of a person who was working in the Department of Culture in that municipality, I was able to know places that as a tourist you never know."

Mortensen, before talking about the film, made an assessment of the aesthetics of Lars Von Trier and a repudiation of what he said at the Cannes Festival that led to him being declared "persona non grata." In regard to his participation in Todos Tenemos Un Plan, he stated, "I'm very happy to be here with this team, with our producers and above all with Ana. We've been talking for years. Things were changing; we were at the point of doing it and it wouldn't get done. It's that way with independent cinema; it takes a lot to get it going and to tell a story like this, such a special one. It is a home-grown product, from this home, which has also been my home. And I feel as though it's mine. It's the first time that I'm going to film here." About his character, he said, "I play two men, very similar and yet at the same time very distinct. What I like is that there are words and the music of the words. And the music beneath the words and between them is something that isn't in linear time. It's something that has to do with what is lost, what is yearned for, nostalgia, doubt, jealousies. All of that is in this film noir story." And he finished off with, "And the foundation is there," recalling the popular phrase of Bambino Veira, a well-known figure from the San Lorenzo club of which the actor is a fan.

Vanesa Ragone, Haddock Films producer (responsible for the successful and Oscar- winning El Secreto De Sus Ojos, among other films) appreciated that INCAA provided funds for the realization of the project, in a strong alliance between private and public investments. "We arrived at this film through sheer conviction. It was Ana´s conviction, it was she who convinced all of us to do our best. The INCAA always supported us and gave us the chance to make free cinema where each one writes what they want and what they think and can develop it. Our relationship with TELEFE is also excellent. A film of this size requires co-production with Spain and with other producers who have joined in."

Soledad Villamil referred to her participation, acting with an international film star: "If there's anything extraordinary about this job, it's that on the one hand, things like this can happen. First, that they contact you to do a movie: extraordinary because it's unusual. Second, that they bring you a script where there's a character that calls to you. And then they tell you, 'The main character is Viggo Mortensen.' But even more extraordinary is that you find yourself working and meeting someone with the human and acting quality that Viggo has. That he's a 'name,' but he's a co-worker. It might be hard to explain or understand, I suppose, what the transition from global star to co-worker, to someone who likes to teach, as he did me and Ana, could mean in the imagination of the public or a journalist. And that is... extraordinary."