Source: Calgary Sun
The King gallops back to the screen in adventure piece 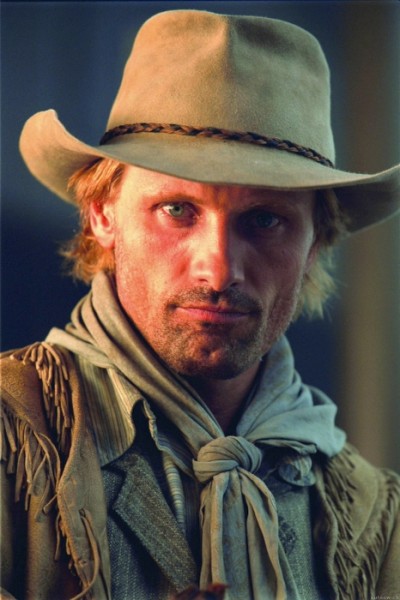 © Touchstone / Buena Vista Pictures.
The Oscar hype is over. And for Lord Of The Rings' Viggo Mortensen, it's another movie and another angle for the media to grab onto.

In this case it's the Disney adventure film Hidalgo, based on the pulpish exploits of 19th-century Wild West horseman Frank Hopkins and the legendary mustang of the title, who won a 4,800-km race in the Sahara [sic] against the world's greatest Arabians at the turn of the last century.

Look at it one way and it's 'An American cowboy goes to the Mideast, kicks some Muslim butt, even charms the veil off the Sheik's daughter'

"Well, she did that. It was her choice and he was reluctant about it," he says of Hopkins' winning over of Jazira (Zuleikha Robinson), a scene that is laden with baggage in this charged time and atmosphere.

Sipping South American tea through a filter straw from a folk-art teapot in a Toronto hotel dining room, Mortensen is less laidback on the issue than his bohemian style would suggest.

His message: Sometimes a horse is just a horse.

"There's been some idea that this is a jingoistic project. But in this movie, you have an American protagonist who goes to a place in the Third World on invitation. He goes there and - compared to a lot of movies with American characters in the Third World - he behaves with dignity and respect. He finishes the race and goes home.

"It's like Lord of the Rings, in that you can't control interpretations. There was an extremely irresponsible review in Time magazine by Richard Corliss who said something like, 'Tolkien said it was not allegorical, think what you will, but there are strong parallels now between the outnumbered brave few and the dark legions surrounding them and the U.S. under siege from the hordes of Islamic extremists.' I thought 'That's unbelievable!' And then he claimed Christopher Lee's Saruman bears an eerie resemblance to Osama bin Laden!"

It was Mortensen's teenage son Henry (from his erstwhile marriage to punk rocker Exene Cervenka) who convinced the actor/poet/painter to take the role of the one true king Aragorn in the Rings trilogy. "He really should be my agent on a permanent basis," Mortensen says.

Hidalgo, however, was Mortensen's call. He was sold by the opening scene, a squalid depiction of the Wounded Knee Massacre - an atrocity that was sold by the press as a great battle and as revenge for Gen. Custer.

The scene sets up Frank as a witness, and a haunted alcoholic debasing himself in Buffalo Bill's Wild West show before opportunity knocks in the form of some rich Arabs.

But the scene appealed to Mortensen because it underlined the shaky connection between myths and truth.

"I enjoyed myself in this movie. I like riding, I've been interested in Lakota (Sioux) culture for a long time. I'd been to Morocco (the film was shot there and North Dakota) and the landscape is beautiful."

His paintings were in A Perfect Murder, where he played the lover of a married Gwyneth Paltrow.

"That movie sold a few paintings, but I've sold more photography." He had photo exhibits in Cuba and Denmark last year.

For now, he's not playing his post-LOTR sex symbol status by the book, eschewing formulaic Hollywood romantic comedies and even not working for stretches of time. "I'm pretty long in the tooth," the 45-year-old says. "Money and fame don't seem very rewarding.

"Of course there is the 'iron is hot' argument. Who knows? Maybe in 10 years I'll look back and say I should have gone for the money," he adds with a grin.