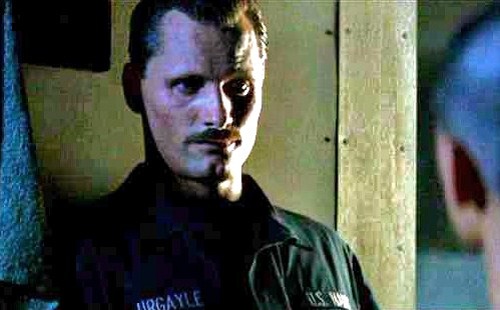 © Hollywood Pictures/Trap-Two-Zero.
A bracingly gung-ho film for a nonmilitary-minded time, G.I. Jane is a very entertaining get-tough fantasy with political and feminist underpinnings. After a number of respective career stumbles, co-producer-star Demi Moore and director Ridley Scott return to fine form here with a story that holds enormous appeal for women but also contains enough rough action and macho attitude to satisfy male auds. If Moore can regain public favor after turning off viewers with her last few features, this should score as a solid late summer attraction.

Far from being Private Benjamin, this is more like Flashdance in fatigues, a serious story of a very capable and independent-minded woman who proves herself against tremendously difficult odds in the rigorous setting of the Navy SEALs special training. Yarn could have gone astray in any number of ways, from the unintentionally comic to the merely cliched, but ends up putting itself over through an accumulation of highly charged challenges and confrontations, authentic-seeming details, tart dialogue, vibrant performances and very credible emotions.

Opening reel sends up warning flares that an issue-driven tract could be in store. A tough-as-nails senator from Texas and senior member of the arms committee, Lillian DeHaven (Anne Bancroft), complaining loudly that one quarter of all military jobs remain off-limits to women, intimidates Navy brass into allowing a woman to train for the most elite of all operations units, the SEALs. Given the 60% dropout rate even among the highly qualified men who ordinarily apply, the secretary of the Navy agrees, figuring that whoever is selected will never make it anyway.

A candidate is soon found in Lt. Jordan O'Neil (Moore), a Naval intelligence officer who happens to be in pretty great shape. Leaving her fellow officer and boyfriend Royce (Jason Beghe) behind in Washington, D.C., Jordan heads for training camp in Florida, where she is quickly plunged into Hell Week, an astonishingly grueling series of physical ordeals that the average person could never begin to endure.

Jordan manages to survive the endless raft liftings, cold water immersions, calisthenics and obstacle courses, but when she realizes that she is quietly being cut extra slack in some areas, she furiously demands the same full dose of punishment that the men receive. To further place herself on equal footing, she shaves her hair down to the requisite one-eighth of an inch and moves into the men's barracks, refusing to be deterred by the recruits' taunts and ridicule.

If one hasn't been until now, the viewer should be entirely on Jordan's side by this point. As a black aspirant tells her, "You're just the new nigger on the block," and her deep underdog status demands almost superhuman physical strength and emotional control, just as it allows no margin for error if she is to stay in the program.

Clearly interested in doing her no favors is the Command Master Chief (Viggo Mortensen), a very tough taskmaster whose job it is to get in everyone's face and weed out those who can't cut it. Jordan must also deal with an older commanding officer (Scott Wilson) who resents the meddling of politicians and the contemporary irritant known as sensitivity training, both of which are never far from his mind due to her presence in training.

But just as Jordan makes it through Hell Week and is sent off as the leader of a simulated commando mission, things become more complicated when it appears that Senator DeHaven isn't at all sincere about wanting her hand-picked guinea pig to make it through training; Jordan, it seems, is just a disposable chess piece in a crafty politician's overall game.

The rigors of combat training, however, have well-prepared Jordan to deal with the senator, and she manages to get herself reinstated in time to participate in a battle readiness submarine operation in the Mediterranean that unexpectedly turns into an actual covert mission when trouble flares in Libya. Sooner than she ever imagined, Jordan is put to the test under fire, with the Master Chief's life on the line.

Crucial to the film's success is the perfect match of style and content; pic is as hard, polished and powerfully functional as a newly cleaned gun. Dialogue scenes are highly compressed, going on at just the right length to make their points, and the emphasis on military jargon in David Twohy and Danielle Alexandra's keen-eared script makes for some extremely colorful exchanges; Jordan's enraged and vulgar rejoinder to the Master Chief upon being told to find a life somewhere else brings down the house and is bound to become a classic of its kind.

At the same time, Scott is very much on his game visually, as he reasserts his talent for visceral cinema by strongly conveying the physical aspects of arduous military training as well as the tension of actual battle. If logistically challenging war films ever come back into vogue, it would be good to see Scott try one.

G.I. Jane reps a recurrence in Scott's work of his strong sympathy for resourceful, ballsy women, first witnessed in Alien and most recently seen in Thelma & Louise. Moore's tendency to take herself too seriously has been a problem in the past, but the fierce determination and humorless dedication she brings to her role are big pluses here, and she makes the exertion of Jordan's will, and body, entirely believable. Physically, she looks as hard as any of the guys, and only the musicvideo-style shots of her feverishly doing one-armed push-ups smack of star ego and trendy body fetishizing.

The pleasure Bancroft takes at portraying an old pro politician who excels at backroom deals proves contagious, Wilson is wonderfully understated in his important scenes as the base's c.o., and Lucinda Jenney brings an offbeat touch to her small role as the one female friend Jordan makes during training. The men in the unit are all very convincing in attitude and physical ability.