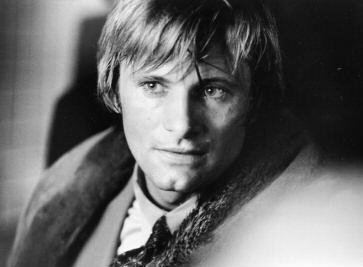 © Universal Pictures.
Viggo Mortensen is more Danish than we thought.

Don't come here and say that one of our competitors is the only international newspaper in Denmark. When has that magazine ever got a personal response from a Hollywood star that has been portrayed in the newspaper?

Sure we know that Politiken has the only movie supplement - but after getting proof that our newspaper is read in the capital of the movies we're very proud.

But we have to say that the reason for our star contact is not so good. Actually it's what we've been writing about the Danish/American actor Viggo Mortensen being less Danish than he really is. Well, the world is unreliable and so is the internet.

So to make everything good again we'll let our victim speak for himself. After his success in, amongst other movies, The Portrait of a Lady, Crimson Tide, and lately Daylight, Viggo Mortensen wrote a letter to Politiken:

"If it's possible and you have the guts to do it, I want you to print this letter in your newspaper.

I know that I haven't been in Denmark this year and, therefore, haven't had the pleasure to read your amusing, but not very well researched article/portrait which was called 'Viggo Mortensen unveiled' ... I got the article from my Uncle Jørgen.

Here's some information for you:

My father is Danish, not my mother.

When it comes to 'the sad truth' about 'he naturally has never been in his mother's country': I was two years old when I visited Denmark for the first time with my father. I have lived in several places in Denmark. I've worked in Denmark. And I've paid my taxes in Denmark.

I speak and write Danish. I have friends in Jylland (Jutland), on Samsø, and on Sjælland (Zealand) - and I'm very proud about it all.

You say that my son 'is named something as un-Danish as Henry'. Even if I think it really doesn't matter what your name is as a Dane or as a foreigner I have to tell you that the name Henry has been used for several generations in my Danish family.

I'm happy to be a Dane, but my wish is that 'it meant something more in the American movie business'. This is not the case. In my line of business, as it mostly is in others, it is effort and a bit of luck.

If there ever should be any questions again about my work, origin and so on you're very welcome to turn directly to me.