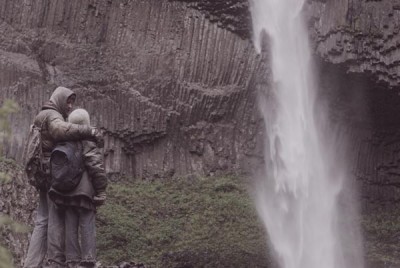 Image Macall Polay.
© 2929/Dimension Films.
Apart from its vivid imagery and heartbreaking intimacy, the most remarkable thing about Cormac McCarthy's Pulitzer Prize-winning, post-apocalyptic 2006 novel, The Road, is, as always, the author's incredible way with words. In addition to such stylistic trademarks as its general lack of punctuation, what makes McCarthy's prose so distinctive is how it turns gritty, sometimes gruesome, scenarios into pure poetry.

The problem, of course, is that such magnificent language is almost always part of McCarthy's descriptions, not his dialogue, and thus the commitment of his work to film inevitably has to suffer some losses in the translation. The Coen Brothers, who masterfully adapted McCarthy's No Country for Old Men in 2007, understood this, using the author's words very sparingly, while also exhibiting a filmmaking technique that not only matched the artistry of those words, but exceeded it.

In their attempt to retain as much of McCarthy's language as possible, director John Hillcoat (The Proposition) and screenwriter Joe Penhall (Enduring Love) don't fare nearly as well as the Coens, saddling their adaptation of The Road with an unnecessary, intrusive voiceover narration that, rather than evoking McCarthy's brilliance, suggests viewers need their hands held while watching a film instead of intuiting plot and character nuances for themselves. It's a problem that's popped up in countless movies and TV shows in recent years, and it weakens The Road, no matter how perfect lead actor Viggo Mortensen's gruff voice sounds on the soundtrack.

And yet, my dissatisfaction with the superfluous narration is pretty much where my complaints about this otherwise gripping and appropriately intimate dramatic thriller end, as Hillcoat has managed to visualize my own personal interpretations of the novel with a rather alarming accuracy. The director doesn't just nail the perpetually gray, burned-to-a-crisp look of the story's desolate landscape, he also captures the essence of its most pivotal scenes, and elicits many of the same profound sensations I remember feeling when reading the book.

In this dystopian tale, Mortensen stars as an unnamed father whose unnamed son (newcomer Kodi Smit-McPhee) is all he has left in a world that's been ravaged by some unnamed extinction level event, which wiped out all civilization and nearly all life. ("Each is the other's world entire," McCarthy's writing says of the surviving pair.) The goal of the father and son is to reach an unnamed coast, where some unnamed salvation presumably, hopefully awaits them. Along the way, they occasionally encounter various unnamed fellow survivors, some good, most bad, while Mortensen's character occasionally flashes back to his life before the mysterious fallout, when he was still in the company of the boy's unnamed mother (Charlize Theron).

The external conflicts faced by the man and his boy (relentless inclement weather, limited to no supplies, hunger, an ever-looming pack of men who've turned to cannibalism) are dwarfed in comparison to the internal ones, which sound like the side-effects of the latest anti-depressant but are portrayed quite sincerely (hopelessness, guilt, desperation, thoughts of suicide). As it should be, the movie is most about the deep-seated, codependent relationship between the father and son, which didn't quite rip my heart out the way it did in the novel, but came closer than I expected.

Mortensen, whose shown with a feral overgrowth of hair and a considerably frail frame, was a superb choice to play the father. Even without the necessary alterations, his naturally rugged appearance is an ideal fit for the film's coarse visual style, and he consistently finds the right emotional notes to play, incorporating subtlety and vigor as needed. I've never seen this actor give a poor performance, and in The Road, his skills are utilized wonderfully.

Nearly as impressive is Theron, whose character, while still very much on the sidelines, is expanded by Penhall, appearing more frequently than she did in the novel, and revealing some shattering, deeper truths about the family's past. This expansion marks the screenwriter's wisest and, perhaps, most noticeable modification of the source material. The woman's increased presence provides additional insights into Mortensen's character's pain, and Theron provides some of the same de-glammed intensity she brought to her Oscar-winning role in Monster. Again, the filmmakers made a wise casting choice, hiring an adept actor to fill a role that, expanded or not, stands out on the screen much more than it did on paper.

As the boy, Smit-McPhee proves himself a valuable find, establishing a believable rapport with Mortensen that's essential to the film's success. There are, however, certain scenes that require a great deal of dramatic potency, something this young actor, while gifted, doesn't seem quite capable of just yet. Rounding out the small cast is Robert Duvall, who shows up briefly but memorably as an old drifter who offers some existential wisdom, and a nearly unrecognizable Guy Pearce, who has but one scene, albeit a very important one.

The simple, yet flawless production design of the film is realistic enough to make one believe that the crew headed out to some remote part of the world, bombed it, covered it in ash, and summoned the heavens to cast an endless gray shadow upon it. Javier Aguirresarobe's cinematography, though certainly not on the same altar of excellence as Roger Deakins's work in No Country for Old Men, is instrumental in conveying this eerie, end-of-the-world authenticity, delivering powerful compositions that are both visceral and lasting.

McCarthy's books are not the easiest texts to adapt, and while Hillcoat and Penhall stumble a bit with the task, theirs is an adaptation worthy of praise for its ability to very effectively mirror its source. The Road is one of the best books I've ever read, and this movie made me feel as if I were reading it all over again.