The Road Is Grim But Graceful 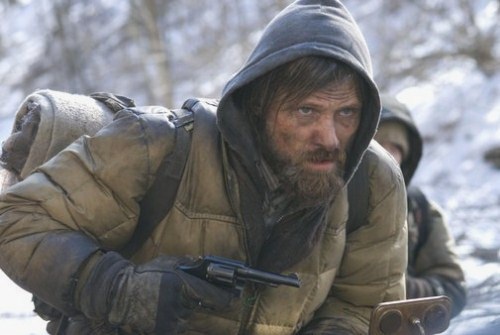 Image Macall Polay.
© 2929/Dimension Films.
The big question with The Road is, who will want to travel it?

It is not, you see, a very easy trip. It is a well-made and faithful adaptation of the Cormac McCarthy novel, which only means it's a long slog through hell, lit with little hope and few glints of humor.

Viggo Mortensen stars as the unnamed man in this post-apocalyptic horror tale, directed by John Hillcoat (The Proposition). In flashbacks, we see some kind of blinding event decimated life on Earth, and he and his son (Kodi Smit-McPhee) and wife (Charlize Theron) all survived the event, but little else did.

Now the man is on the road with his son, trying to make his way south, hoping there might be more habitable conditions there. But the road is hard - food is a rarity and bands of cannibals terrorize the countryside, murdering and eating anyone they find. The man and boy trudge forward in rags, past burnt forests and abandoned homes, pushing a shopping cart with all their belongings.

The boy is in a constant state of terror, the man is always on guard. Only rarely can they relax, and never for long.

The Road lives and dies with its linear form, although Joe Penhall's adaptation does allow for some fleshed-out flashbacks. Still, this is a film that mostly walks straight ahead, one step at a time, encountering its plot turns in serial form.

Here, the man and boy encounter a group of cannibals. Next they meet a blind preacher (Robert Duvall) - the boy wants to keep him, sort of as a pet. Then they discover a farm house and its ugly secret. On and on.

The surprising thing is that director Hillcoat manages to present all this in a manner that's interesting and, in its own twisted way, graceful.

The Road - centered by Mortensen's typically physical but tempered performance - is hard to watch. But it could have been much harder. Hillcoat isn't doing opera here, he's doing tragedy.

When the journey finally ends, for the first time there's some balance of despair and hope. It's a dust mite at the conclusion of a long and frightful journey, but for the first time the possibility of life shines. And it's just enough for the film's salvation.
Top of this page
Last edited: 15 February 2011 15:25:54